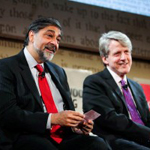 "When you study finance, you are studying how to make things happen, on a big scale, on a lasting scale...and that has to matter more than getting into Google and programming some little gimmick", said Robert Shiller in our debate at The Economist's Buttonwood Gathering on October 30 in New York City. Shiller argued that financial innovation is just as important as the innovation that Silicon Valley creates and that without finance we would not have an economy--or a technology industry.

Needless to say, I didn't agree.

When I was invited to represent the tech industry at the event, I thought that this position was a no-brainer. After all, how could anyone in his right mind argue that our best and brightest should go into finance and sell their souls to none other than Goldman Sachs--which played a major role in the recent financial meltdown? But then I learned that I would be debating a newly minted Nobel Laureate--the person who has long been warning about asset bubbles and the financial industry's ills. Robert Shiller is no shill for the finance industry; he is one of the most respected and credible economists in the world.

So I lost a lot of sleep in preparing for the event.

In the debate, I argued that collateralized debt obligations, credit-default swaps, and structured investment vehicles were the greatest innovations created by the financial industry in recent times--and that what these got us were subprime loans, the housing bubble, and the financial crisis. And, with high-frequency trading and other technology gimmicks that investment banks are increasingly using to skim money off the top of stock-trading systems, it is no wonder that investment bankers are called the modern-day robber barons.

On the other hand, look at what the technology industry--and Google--have brought us. We now have an ocean of knowledge freely available to us that we can search. We can watch videos of lectures by today's leading thinkers; connect via e-mail and social media with anyone, anywhere; work anywhere; and crowdsource solutions to problems. With the apps on our smartphones, we can transact commerce, perform medical tests, and find directions to where we want to go to. Soon, self-driving cars such as Google's will revolutionize transportation by allowing us to be productive while we commute; they will eliminate traffic jams and accidents; we won't need parking spots, because these cars can drop us where we want to go to and come back when we're ready; and we won't need traffic signals or speed limits. Technologies such as Google Loon will provide ultra-fast Internet connectivity everywhere we go. Advances in 3D printing will revolutionize manufacturing. Sensor-based apps will help us monitor and improve our health. Water-sanitization technologies will provide the world with abundant clean water.

Shiller argued that without financial innovation, none of these breakthroughs would be possible. He claimed that Google was no different from an investment bank, because it was buying companies and bankrolling their developments. He said that we can afford to live in houses because of a financial innovation called the mortgage, and that the insurance industry--another financial innovation--softens the blow of natural disasters. "Every human activity that matters has to be financed", he said.

Shiller's comments about Google's being like an investment bank and programming "little gimmicks" showed me that he doesn't fully understand what Google and the technology industry do. He also doesn't realize the power of digital currencies such as Paypal; the impact that crowdfunding will soon make; and that the cost of creating technologies is dropping exponentially--causing venture capital and finance to play now a smaller role in innovation than ever before.

During our meeting before the debate, I got to know Shiller. I developed a deep respect and admiration for his intellect and values. Yet debate co-moderator Greg Ferenstein and I had to give Shiller a crash course in social media and show him how to use Twitter. So I don't blame him for not getting it.

Shiller's key argument was that that "Young graduates with a moral purpose and interest in the financial world should join Goldman". That, he is right about. What is often missing from the finance industry is a "moral purpose". This is what led to the asset bubbles and is why we see so much corruption on Wall Street; this is what we need to fix. So maybe a few graduates--but a few who have a moral purpose--should join Goldman.

But I don't think that Goldman and other investment banks should continue to get yet another free ride on the backs of taxpayers and society. They should pay a tax for the subsidies that go into public education--perhaps $200,000 for every engineering or science graduate they hire from American colleges. With the billions they skim from our financial system, they can surely afford that.