Should Greenies own oil companies in their nest egg?

One of the most exciting statistics of the last few months has been the dramatic drop of the U.S./OPEC trade deficit. Over the past few years, the OPEC deficit has been wavering between $8.5 billion and $11.5 billion per month. However, in November of 2012 the deficit dropped to $6.6 billion and by December, it was down to $3.4 billion. This is great for national security and for our budget, and it helps our GDP growth. (Imports are a subtraction in GDP growth.)

This trend is not so astonishing when you realize that oil and gas are two major expenses of war, and that we have to source this fuel close to the conflict -- from OPEC countries -- when we fight wars on foreign soil. With the end of the Iraq War, on December 15, 2011, and the draw down of the War in Afghanistan, petroleum imports are at the lowest they have been in 16 years. And domestic oil production is up a staggering 29% over 2008 (President Bush's last year in office).

We are definitely headed in the right direction for energy independence. However, when you look at the map below, it becomes abundantly clear why more work most be done now to further reduce our reliance on all petroleum products.

Bike Power
With 70% of the oil reserves located in OPEC countries, the future of America, on every front -- security, economics and freedom -- depends upon finding alternative fuels to power our lives, our economy and our defense. Bike power! Move closer to work. Drive an electric car and power it up with solar panels.

That is why, as much as we like to blame the oil companies for messing up our world, a greener future lies in the hands of the consumer, more than the oil company. As we choose greener ways to get around, companies will bend over backwards to develop the products and services to get us there.

Looking at the chart below, you'll see that our largest oil company -- Exxon Mobil -- makes up a very small part of the world's oil production. Three percent. In the larger scheme of things, Exxon looks more like a Jedi Knight, fighting to have a say, than the Evil Empire that controls everyone. 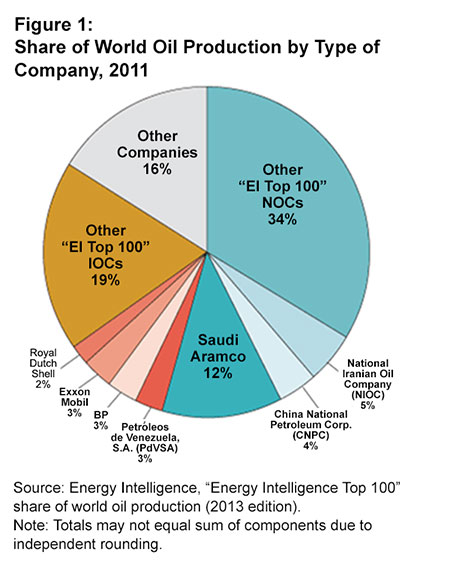 It's hard to love oil, particularly after a devastating oil spill. However, as long as that's what our gas guzzlers drink, it's important to have a steady flow. I'd rather see my neighbors fueling up with Exxon Mobil than Saudi Aramco.

You know me as a LOHAS* and I cannot deny how happy I'll be when I can fly a solar plane to Europe. (If it's good enough for the solar station, surely we can find a way to fuel our planetary aircraft.) And I'm still dancing on the ceiling that our monthly OPEC deficit was down to just $3.4 billion in December 2012. However, as we march (and bike) toward that more glorious tomorrow, I'm exceedingly glad that I don't have to ride my horse to New York every time I appear on CNBC.

I'm voting for an entirely new energy source by 2015. However, we're not there yet. We're in transition. And part of the journey out of what was into what will be requires ensuring that we don't become reliant on the Middle East selling us the gas to get to the grocery store.

If you choose to own oil companies in your nest egg, be aware that the revenue growth was flat over the last year and share prices are trading near the 52-week high.

Oil performed better than most industries during the Great Recession, but then lagged behind the markets during the BP Oil Spill. Returns in 2012 were tepid -- at under 2%. I wish I could say that this consumer staple is becoming obsolete, but that's unlikely to be the case for awhile. If you are going to own oil, you definitely need to rebalance annually, just as you do with all of your other stocks. And thanks to the ending of two wars (finally!), oil may not be the hottest industry in 2013.

*Lifestyles of Health and Sustainability