In an April 16 post for The Week, Michael Brendan Dougherty writes a provocative column explaining why former Secretary of State Hillary Rodham Clinton shouldn't be given a pass for the anarchical mess that Libya is experiencing today. The piece, bluntly titled "Don't Let Hillary Clinton Escape the Blame for Libya's Anarchy," is a microcosm for the kinds of arguments that Clinton will have to combat if and when a more progressive and less interventionist Democratic candidate enters the primary race.

While Dougherty's post is worth reading in full, his argument can be summarized as follows: Hillary Clinton has no problem taking credit for driving Muammar al-Qaddafi from power, but she is equally quick to disassociate herself from the fallout that Libya is dealing with today. In Hillary Clinton's mind, Dougherty argues, the feuding governments, the rival parliaments, the infighting between militias, the prevalence of extremist organizations throughout the country, and the proliferation of ISIL militants in some of Libya's coastal cities are the kinds of issues that Libyans themselves need to address. Hillary Clinton disavows "any responsibility for death and destruction from here on out."

It goes without saying that, as a senior Obama administration official who was the primary point person in getting members of the Arab League to actively participate in the NATO-led coalition, Hillary Clinton does in fact bear some responsibility for the perilous state that Libya finds itself in. Just as President Barack Obama likes to argue that there wouldn't have been an Al-Qaeda in Iraq or an ISIL if President George W. Bush refrained from invading Iraq in 2003 and overthrowing Saddam Hussein, Libya probably wouldn't be in the middle of a full-scale civil war and its oil infrastructure likely wouldn't be suffering from such dismal output if the White House decided to stay away from Qaddafi in 2011. All decisions have consequences, and as the Secretary of State who gradually came to the conclusion that the U.S. and its European and Arab partners needed to do something to save Libyan civilians in Benghazi, Hillary Clinton is in fact part of the equation. 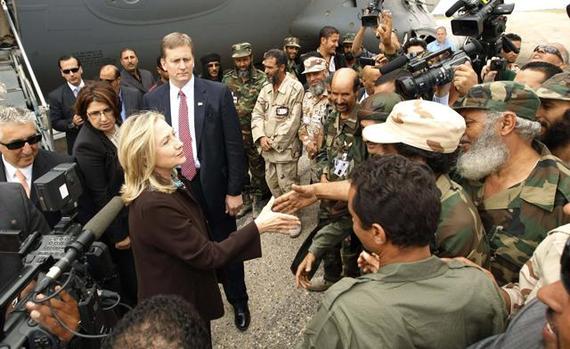 But are we truly giving her a free pass on Libya, as Dougherty writes? I'm not so sure.

Hillary Clinton may have been the person charged with keeping the Arab-NATO alliance together throughout the roughly nine months of the air war, but she is not the only official in the Obama administration who was intimately involved in the war effort -- nor was she the only cabinet-level official pushing for U.S. military involvement against the Qaddafi dictatorship. As Secretary of State, Hillary was not in charge of the military; she was not tasked (nor should she have been tasked) with picking Libyan government targets to bomb; and did she didn't make the final determination as to whether the United States should use its considerable airpower to push Qaddafi out of power. As in all matters of war and peace, the buck stops at the president's desk: it wasn't Hillary, but Barack Obama who ultimately gave the orders.

It would be easy to simply cast the blame on a single individual in order to explain the chaos that is now Libya after Qaddafi. But, as much as we would like to pin the leading Democratic nominee for president with a broad brush and complicate her chances by re-litigating the decision to intervene in the first place, President Obama, then-U.N. Ambassador Susan Rice, NSC Staffer Ben Rhodes, and the rest of the National Security Council staff who supported going into Libya in March 2011 deserve just as much blame as the former Secretary of State.

Of course, Rice, Rhodes, and Power are not running for President, and not one of these people has the privilege of leading in the polls for the Democratic nomination by a 40-point margin. President Obama, meanwhile, is on the way out in another twenty months. Hillary Clinton is running for President, so it's perfectly proper for people around the country -- liberal, conservative, moderate, or centrist -- to scrutinize her record and her decision-making process in order to keep the first lady-turned New York senator-turned Secretary of State on her toes. But, in so doing, lets not lose sight of the fact that on Libya, Hillary was only one voice in a roomful of advisers.