Let's face it. Adulting is hard. But much more important than overcoming the Sunday Scaries and using Excel to keep track of just how bad you are at actually sticking to a budget is your health. There's a good chance you've heard of PrEP, but how much do you really know about it? PrEP (pronounced "prep" and commercially known as Truvada) is an abbreviation for pre-exposure prophylaxis and it is an anti-viral treatment approved by the FDA in 2012 that your physician can prescribe to you in daily doses as a method of preventing new HIV infections.

Many people, with good reason, have lauded the development of this treatment as a modern miracle. So we should all be on it, right? Not so fast. From a public policy perspective, it makes a lot of sense to recommend the use of this drug to the masses. After all, HIV-AIDs is a terrible epidemic and there are positive network effects when entire populations become immune or resistant to infections, as with vaccines. But at a personal level, the decision to start PrEP is a bit more complicated. Let's look at some of the key considerations, questions and implications.

Are there side effects?
PrEP has several known side effects to consider. Some, like headaches, nausea and problems sleeping are minor and tend to wear off. However, there are some potentially life-threatening complications including increased lactic acid in the blood, liver damage, kidney failure and decrease in bone density. In order to guard from all of these, it is mandatory for patients on PrEP to see a physician at least once every 3 months for a full panel of blood tests, according to Truvada.com.

Is PrEP common?
Increasingly so. Anecdotally, I can tell you that I see men on dating and hookup apps advertising their use of PrEP more and more. I also hear friends talk about it and admit to taking it on a fairly regular basis. It's understandable that there may be some negative stigma associated with a gay man who chooses to take PrEP -- it implies some level of promiscuity -- but the community has gotten past that issue quickly, due to its important role in public health. In the way of more hard evidence, the following graph shows patient interest in PrEP at Kaiser Permanente San Francisco; it illustrates the same increased use. 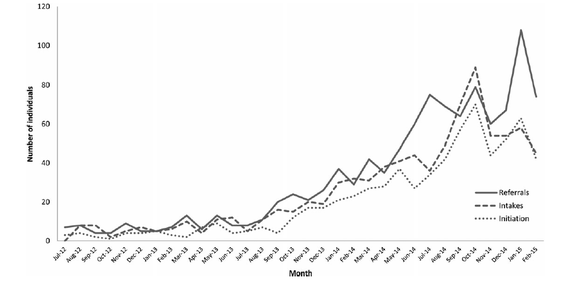 Does it protect from other STIs?
No. This is actually a really interesting point to stop and look at a few recently published STI incidence statistics and consider their relation to the increasingly common use of PrEP amongst gay men. A few months ago, the Center for Disease Control (CDC) released its annual report on the incidence of several STIs. In 2014, there were increases in the percent of the general population diagnosed with chlamydia, gonorrhea and syphilis for the first time since 2006. As usual, women and people aged 15-24 are at higher risk than other cohorts, but there are some startling trends in the gay male population over the past few years too.

The graph below, also from the CDC, shows that the rate of syphilis infection amongst gay men is growing much more rapidly than it is in the general population. Add to that the fact that of all men with cases of syphilis, 83 percent of them are gay and you begin to better understand a dangerous unintended consequence of a drug that prevents new HIV infections -- many patients on PrEP are having unprotected sex. This is not just an assumption based on the trends. According to Kaiser Permanente, mentioned above, 45 percent of surveyed patients on PrEP reported that they were having more unprotected sex. 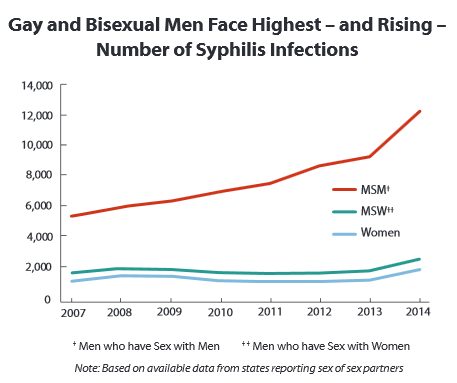 Cast in a less alarmist light, consider that all 3 -- chlamydia, gonorrhea and syphilis -- are bacterial infections that can be cured with antibiotics. So does it really matter if the use of PrEP is positively correlated to rising rates of STIs other than HIV? I mean, they're curable. It matters. And that's simply because not all STIs are curable, including herpes, HPV and hepatitis -- the latter two of which can be life-threatening. It's also worth noting that the same CDC report showed that, of the gay men who were diagnosed with syphilis, 51 percent also were infected with HIV. This type of co-infection is common, given that those men were likely engaged in unprotected sex and syphilis can cause open sores, which are more likely to be infected by HIV.

Is there an alternative to PrEP?
Yep, there is. Before there was PrEP, there was PEP, which stands for post-exposure prophylaxis. This treatment is often used for healthcare officials who work with HIV-infected patients and their bodily fluids in case of emergency. It's also nicknamed "the morning-after pill for HIV." It is an antiviral regimen, just like PrEP, except that is has to be started within 3 days of the exposure and lasts one month. The same side effects are a concern with PEP, but because the treatment only lasts one month, there is less concern about long-term issues.

So should I be on PrEP?
I don't have an answer on this one. It is a very personal choice that you should discuss with your physician. The decision I made for myself may not be the right one for you. To get started, consider the information above and ask yourself a few questions. Do you practice unprotected sex and, if so, how often? Are you in a committed relationship? Would you prefer to have peace of mind no matter what? Will taking PrEP change your sexual behavior and are you ok with the potential consequences?

Nate Warden is a regular contributor to The Huffington Post Gay Voices blog and founder of www.ComingOut.Space, an online library of diverse coming out stories.