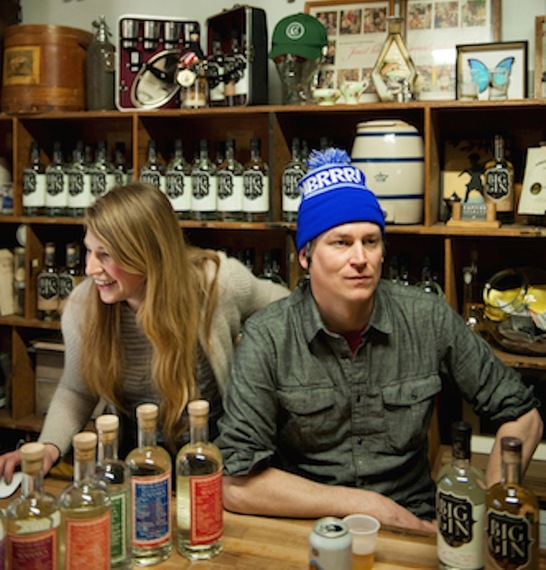 Back in 2008, I watched so many students tend bar or wait tables to help support themselves through college. Once they finally emerged with degrees during the Great Recession, NO HIRING signs were everywhere. Some kept pocketing those tips and waited for company hiring to refresh. Holly Robinson was one of those and while managing a bar met Ben Capdevielle.

Both love and an entrepreneurial adventure began.

Timing is everything. Well, maybe not everything, you do need a great product, some capital and robust distribution.

Ben was the third generation in his family to crank the still. His grandfather had started a proud family business of moonshining and Ben opened the first "tax paid" distillery in his families' history.

The still was fired up and bottling commenced in 2010. By 2013-14 their products were winning tons of awards, not to mention they nabbed the "Best Gin in the World" prize. By 2016 competition had become fierce. All over America people and wanna be entrepreneurs had cranked up their stills. California legalized distilling last year and hundreds of new entrants were flooding in.

Ben and Holly were faced with offers to buy, offers to invest and a BIG DECISION to make.

Every successful entrepreneur faces this decision once they've gotten over their first major customer adoption hurdle. In liquor, as in many businesses, the money and distribution you need for the next big step to secure your market position is often enormous.

They had a real winner on their hands but rarely in any new market are you left alone to grow and steal market share. At least not for long.

Holly and Ben had to ask themselves, could we become the new Hendrick's Gin? Or will we get crushed by Diageo (the Wal-Mart of wholesale liquor brands) or out flanked by another new gin distiller and be confined to the artisan history books?

So, what decision did Ben and Holly make and why?

Well, let's take a step back first. Here are the key questions that every successful entrepreneur needs to answer:

1.Is the risk and money needed to get to the next defensible stage within reach or too much?
2.How would the company and you need to change to get there? Do you want to do that?
3.If you sell, could you get a meaningful amount of money upfront that could satisfy some of your important life goals (debt free, kid's college, new house, more time, your own or maybe even your parents'/kids' financial independence)?
4.How much is essential, enough or nice to have?
5.Is there a way to mitigate risk and structure a deal where you get some cash now and have upside incentives to grow the company?
6.Are you willing to roll the dice and take the chance you will flame out and end up with nothing?
7.Or would you rather take that chance and possibly be back at the starting gate again than let someone else take the run at being the industry giant (See Jason's blog about his unicorn that went belly-up)?

These decision points and considerations vary dramatically by industry and timing. But they often share many of the same characteristics.

There rarely is a RIGHT answer if one is brutally honest in answering those questions. At least not one that is certain at the time you have to make it. One can only determine whether it was the right choice after the calendar has turned over a few more times. Even then the 'what if ?' is often impossible to decipher.

In the end, both sets of founders decided to sell, teaming up with players that had more market and financial reach.

Ben and Holly are thrilled and leading the charge to make BIG GIN the most sought after gin with resources and support from the acquiring company (upside for them included).

Oh, and along the way Ben and Holly got married and birthed a fourth generation moonshiner in training, Stella.


Every industry is different in terms of the capital and market position needed to be the dominant brand. Be mindful of the changes and search your soul as you hit each milestone and double down with more money and skills (and some luck) - it's the only way to get to the next defensible position.