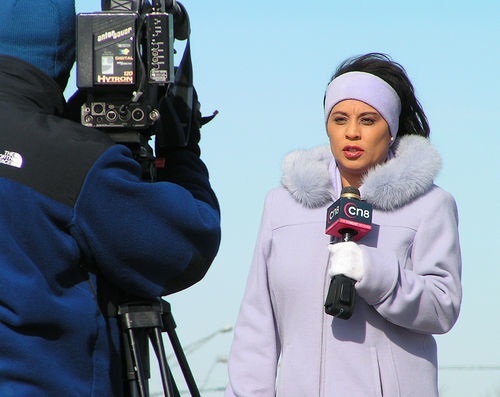 We are the news.

I don't mean "we" as in the public. I'm talking about journalists.

Last week, CNN's Matthew Chance and some 30 of his colleagues were set free after Libyan gunmen held them inside Tripoli's Rixos Hotel for five days. We all collectively breathed a sigh of relief that they had navigated through a potentially dangerous circumstance.

But then we were bombarded with hours of repeats of the group leaving the hotel, dramatic stills of them hunkered in hallways with flak jackets, re-re-runs of Chance and others being interviewed by their compatriots about their ordeal, heavy emotion on TV stage sets and in many camera frames.

"It was terrible, a horrible situation," said Chance. "An absolute nightmare." Then from the breathless anchor, Hala Gorani, "How do you keep it together!?

"I just remained focused on the news," said Chance, who, in fact, was back out on the streets reporting that evening. And survival, I'm sure. The problem was that their own cable outlet was focused on them.

The reporter isn't and should almost never be the story. Or try hard not to be, no matter how much "personal brand" work our social media experts tell us is essential to survive the tornado of change that's tearing up our old ideas.

Sometimes a Lara Logan comes along, where sexual assault of a reporter needs to be public record, but even then to address not just the potential danger to women journalists but the easy abuse and rape-as-a-weapon of women in war zones generally.

Hairstyles (and hair) come and go, like most fads. But what Washington Post legend Ben Bradley said not long ago has always and will always be true: the value is in "telling good stories." But about other people.

If a journalist is in captivity, their tale might provide unique insights into the often secretive networks of their captors. In this case, it was several dozen press people talking to each other and a couple of minders. Which will be indelibly marked in their minds but it tells us very little about what was actually happening in the Libyan chaos.

Unless Muammar Gaddafi was there disguised as a waiter serving them dwindling rations of five-star food.

Sarah Sidner, Chance's fellow CNN reporter in her turtle shell protective gear was actually dodging bullets when the network cut away so viewers could see U.S. newsrooms shaking in the East Coast quake and anchors exclaiming.

Then, almost before we knew it, we were watching other reporters clinging to light poles in Hurricane Irene, showing us their weather mettle.

A 2001 Pew study about media coverage of the Gulf War suggested that some 80 percent of television pieces in the early days of the invasion featured only the reporter. No soldiers. No Iraqis. Not even a stray goat.

One of the most encouraging outcomes of that orgy/cult of wartime reporting personality is that no one I know has any idea whatever happened to Arthur "The Scud Stud" Kent.

In contrast, as I was watching this deep dive into self-referential reporting in Tripoli, I thought about Bill Gentile, the steely Newsweek photographer I knew in El Salvador, captured in Peru by the Shining Path, the bloodiest and most savage and anarchical guerilla group in the history of Latin America. Bill somehow got out, an extremely rare bit of luck. While some people certainly made note of this miracle, Bill did not wait for his extra helping of fame and dove back into yet another war zone.

I specifically remember watching him go toe-to-toe with a Salvadoran colonel, whose forces had just murdered a journalist. That's nerve. Putting yourself intentionally in harm's way.

And even those foreign correspondents who are tragically wounded or killed most years are an algebraically smaller number than the local journalists murdered for doing their jobs. They are the bravest of the brave, residents of the countries at war who cannot escape to hotels or catch flights to safety. To American audiences, they will never be brand names.

"This does seem to be a trend in American journalism," Gentile told me from Havana, where he's teaching classes at the American University. "Particularly in TV news, as each outlet struggles to capture and hold onto audience with correspondent "personalities," too often at the expense of the real story those personalities are supposed to cover."

Even the true grit of journalists can fog over the calamity of everyday life for millions of regular people consistently and literally under threat of the gun.

Tim Hetherington, the talented photographer and filmmaker shot to death in Libya last April, operated largely and purposely in the shadow of his work. His friend, war reporter Sebastian Junger, on the other hand, is a brand name that's hard to escape.

This obsessive/compulsive emphasis on branding as a shimmery hope for the future of our business is not that new. Ambrose Bierce, H.L. Mencken, Walter Cronkite, Edward R. Murrow and Dan Rather awkwardly wearing a turban in Afghanistan were all stars. But at least no one ever called them a brand, like Nike, or Apple.

"I live here," says CNN's Branderson Cooper, in an endless loop of promotional ads for, what else? Him, about his globe-trotting and earnest gaze. "But I also live here, and here, and here."

Get a grip, Anderson. Dude, you live in my laptop video setting.

"We always had Twitter and Skype to stay in touch during their captivity," Matthew Chance told CNN. The socials have given a lot of people hope and a platform around the world.

But there are still entire continents (I'm thinking Africa, for one) where people have to negotiate for their lives on a daily basis, very often without success. Tweeting and a support system with lights and cameras are not available to them.

On the next made-for-video story, let's remember what our primary job is and who depends on us to do it.