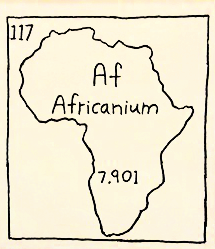 At the very end of last year, the International Union of Pure and Applied Chemistry (IUPAC) announced that four new chemical elements have been verified and accepted and will be added to the periodic table.

Now comes the hard and tricky part, giving them names. Deciding on the symbols is pretty easy, it's giving them a permanent name where all the sharp-clawed cats and mean-toothed dogs come out.

The research teams that discover or create a new chemical element get to suggest a name for the chemical element, but it is IUPAC who makes the final decision about what the new element will be called.

If I could choose anyone to get an element named after himself or herself, it would be the English physicist Henry Moseley (1887-1915), who discovered how a chemical element is defined by the number of the charged particles it has (protons). He discovered this experimentally, leading to the correction and much better understanding of the periodic table.

But if I had to base my decision purely on merit that related to the furtherance of chemistry, well then the Frenchman Antoine Lavoisier (1743-1794) or the Englishman John Dalton (1766-18440) might be a fairer choice. Both men tremendously advanced chemistry. (I hate admitting that someone else should get a chemical element named after himself or herself; I'm a Henry Moseleyist all the way.)

But what if I had to be better and bigger than myself? Who would I choose?

I have read how some people want another woman to get an element named after herself. So far only two women have had the honor. This is not a bad idea, and there are some legitimate candidates. It would be a very good thing if one of the new elements were named after a woman of chemistry.

But what if I thought and felt deeper?

Why not an African American?

We all know Carver (I hope), and he was a research agriculturalist chemist. Julian is less well-known; he was a chemist who did much work in chemical synthesis, discovering many ways to use plants for medicinal drugs.

But while this would be a very fine and wonderful thing, I have to admit I have something better and more beautiful.

Remember, a chemical element can be named after a place. Think of californium and americium and europium. (Chemical elements are not capitalized, if you're wondering why I spelled all these elements the way I spelled them.)

And it is a word the whole world can be very proud of and celebrate. And if you love geography and world history, well it is even a greater word. And if you really enjoy making the world a better place, again you can't go wrong with africanium.

Africa is a continent worthy of such respect. And it should be respected thusly.

The American teams get to suggest some names. And I think africanium would be a good name for one of the research teams to suggest and fight for.

Africanium. Africanium. It has a nice sound to it. It really does. And maybe its symbol could be "Af."

So if I could personally choose, it would be moseleyium; but if had to choose and base it on merit, then daltonium or lavoisierium trumps moseleyium. Yet, if I had to reach outside myself and only be of a finer substance...then africanium would rise.