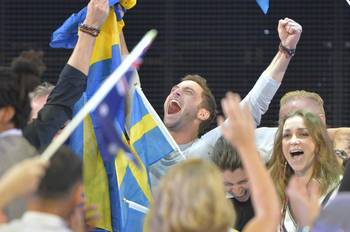 Many observers of this year's Eurovision Song Contest noted that it was the most emotionally and politically charged event in the festival's 60-year memory. While Russia's Polina Gagarina had seemed like the likely winner during much of the broadcast, her entry "A Million Voices," preaching peace and unity against a contrasting and deeply unsettling political climate, was met with skepticism and raised eyebrows.

The European Broadcasting Union (EBU), the official operator of the ESC, has long adopted a law that bans songs of protest and propaganda from Eurovision. But this has not stopped artists and songwriters from using the contest as a platform for their country's political messages.

Georgia also used this year's competition to make a statement. But unlike the Russian representative who urged the nations to unite in peace and harmony, the Russian-born, Georgian-bred participant, Nina Sublatti, co-wrote her entry "Warrior" about the struggles of a "Georgian woman who is a warrior underneath her delicate nature." In contrast with the Russian competitor's "airy" and uplifting performance, Sublatti's image--as well as her delivery and the overall message of the song--were visually and vocally dark, heavy and gothic.

Despite the peaceful message of the Russian performance--and the fact that the anti-booing technology had reportedly been installed in the stadium in Vienna--the live audience could be heard booing during the voting process whenever a country awarded points to Russia. This prompted a gentle but stern reminder by one of the hosts that "music should stand over politics."

Ultimately, both the Georgian and Russian entries--though entirely different, almost to the point of deliberately contradicting each country's messages and political positions--were political in content and delivery. But where does this leave what was meant to be at the core of the song contest--the music and culture of a given nation?

Inspired by the popular Italian Sanremo Festival, the Eurovision Song Contest (originally titled The Eurovision Grand Prix) first began in 1956 in the aftermath of World War II as a cultural move towards European unity and peace. While the contest has acquired a reputation in the Western music industry as a kitsch entertainment show with little musical value, it has provided a unique global stage on which European states--and small ones in particular--can make their voices heard.

When it first opened in 1956, much of Europe was still miserable, exhausted and broke from World War II, but the ESC was not meant to reflect that world. On the contrary, the goal of its inception was to distract war-torn nations and introduce peace and harmony through music. But even this seemingly apolitical approach of promoting a peaceful inter-national dialogue echoes a political intent. The very instinct of creating Eurovision to heal the wounds of war-torn European civilians can itself be seen as a political agenda that stemmed from (and thus reflected) the political and social realities of the aftermath of World War II to assuage Europe's suffering.

Entirely banning the act of political expression at a song contest would mean banning freedom of speech, and therefore contradicting the very intent of the Eurovision Song Contest to grant a voice to every European nation. However, the drawback to offering a carte-blanche to contestants without advanced screening of content leaves the European audience at risk of tuning in for an evening full of protest songs. This would likely alienate the core audience of the popular TV show, as the entertainment factor would swiftly be replaced by a political component, which, in turn, could result in the contest becoming entirely meaningless.

Contrary to the perception of the majority of East European countries--no less the two neighbors and former political allies, Georgia and Russia--Eurovision is not a musical Op-Ed that invites participants to promote their political agendas. Unfortunately, playing politics no longer appears to be left exclusively to politicians, but has instead evolved into an integral part of daily life, and even entertainment. It is doubtful that Eurovision has the choice whether to be or not to be political. If the ESC does, indeed, mirror the current European cultural climate, it is then likely to reflect the sociopolitical and economic tensions of the outside world, unable to escape the influence of the political realities of each participating nation.

This analysis was originally published by the Center on Global Interests.