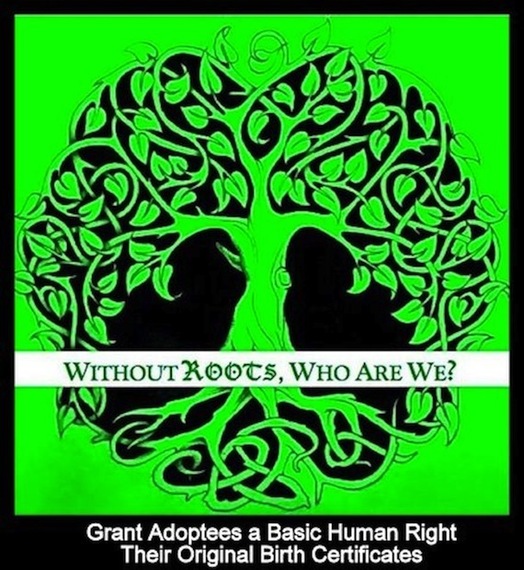 Sitting across the dining room table, sunshine streaming through French windows, Cathie was talking for the first time with the mother who gave birth to her. She wanted me there for moral support, but I wasn't needed. Within minutes, she and her mother were laughing about how they both held their tongue to the roof of their mouth when getting their picture taken, to better define their chin line.

"I finally feel like I'm a part of the planet," Cathie exclaimed, after hanging up the phone. "I'm not an alien after all! This is the vital blood connection my son couldn't provide."

Those of us who have always known our family of origin can only imagine what it must feel like for an adopted person to be cut off from their roots, to have no knowledge of their ancestral history or any possible medical issues they might have to face -- let alone not having the genetic mirror of family, including all the particular inherited quirks, to anchor us into this world.

An adopted person's life didn't just begin with their adoption, as the sealing of their original birth certificates would imply -- as if grafting the child of another family onto the adoptive family tree will change their DNA, their origins and the entire history of their bloodline.

In no other instance is a human being bound to a contract made at their birth and for which they had no say. Yet, only seven states grant adopted people unrestricted access to their original birth certificates, a basic human and civil right every other citizen enjoys. Perhaps it's because we are a nation that thought we left our roots behind when we came to this country that is the reason our lawmakers are able to deprive adopted adults of the simple piece of paper that would open the door to their origins.

The main objection, lawmakers state, is the need to protect the mothers from their children intruding on their lives and exposing their secret. But, as a mother who was banished to a home for unwed mothers in 1965 for the disgrace of becoming pregnant out of wedlock, I have to ask why they care so much about us now when no one cared about what was being asked of us back then? Who are they really protecting -- the adoption industry, the sanctity of adoptive families and the parents' unfounded fears of losing the child they raised?

Our government is not meant to be in the business of legislating relationships. We should be the ones to choose for ourselves whether or not we want to meet each other, have each other in our lives. Despite the complex emotional issues sometimes involved as we find each other again, we can work things out ourselves, without the government's attempts to protect us from each other. In fact, the fear such a stance implies can cause more harm by undermining our confidence about what we have to offer each other -- love, forgiveness, the reconciliation of our stories. But with all of the obstacles in the way of our finding each other, we aren't even given a chance.

Time is running out for adopted adults to meet the woman who brought them into this world. An estimated 2.6 million mothers in America surrendered their babies for adoption from 1951 to 1975, according to the Department of Health and Human Services, as reported in Gabrielle Glaser's New York Times article, July 10, 2015. We are aging. We are dying. Time is also running out for these mothers to be acknowledged for the suffering imposed on them for their "sin" against society and be relieved of their shame and guilt with society's compassion and understanding instead. The closed record system in effect keeps these banished mothers frozen in time. Granting their adult children their original birth certificates acknowledges their importance to them, after years of believing the opposite to be true.

So, if there are 2.6 million mothers, there are 2.6 million fathers and at least 2.6 million sons and daughters, not to mention siblings, grandparents and extended family. This is not an issue for just a small percentage of the population. In fact, keeping family from finding each other impacts us all as a nation, whether we realize it or not.

We can now see the disintegrating effect of separating families on the culture of Native and Black Americans, a blight on our nation's character that, without acknowledgement of its shattering impact, continues today with adoption. The forced surrender of infants by stigmatized mothers is on that same spectrum, with the same devastating results for many.

Despite the wealth of research over the years proving the negative impact of separation on both mother and child, we continue the practice, but with a twist. Vulnerable expectant mothers, instead of being scorned, are now praised for giving their child a better life than they could ever provide, only to discover too late the terrible emotional consequences of their decision. Now we easily accept the idea of designer families, created through egg and sperm donation and surrogacy - asking those children to live even further from their origins with no hope of discovering their ancestral heritage. So many children being asked to live an existential life, what will be the effect not only on them but also on our nation?

Alex Haley's book, Roots, and the television mini series based on it, sparked a great interest in discovering our original nationalities and the stories of our forebears, a trend that has exploded. Such personal discovery didn't create a great exodus to the land of our origins, but it has grounded our individual and collective lives in a more profound context -- world history and the heart of the human condition. We now realize that the lives of our ancestors run through our veins, influencing our own lives in subtle and sometimes profound ways. So, how can it ever be morally right to keep adopted people from discovering the stories that are already a part of them?

Lawmakers must grant adopted persons the basic human and civil right to their original birth certificates and leave it to us to manage our own lives and relationships, because without roots, who are we?