The Wall Street Journal, July 24th, 2016, writes that Verizon is planning on buying Yahoo, the web portal and search engine.

In 2015, Verizon also bought AOL for $4.4 billion. According to Wikipedia, AOL is a "global mass media that develops, grows, and invests in brands and web sites such as The Huffington Post, TechCrunch and Engadget. The company's business spans digital distribution of content, products, and services, which it offers to consumers, publishers, and advertisers."

And while we focus on Verizon, the same story can be told of AT&T.

"AT&T Entertainment Services... is focused on delivering innovative and unique entertainment services - and, in the future, multi-platform advertising opportunities - across the three screens at the center of customers' lives: the wireless device, the TV and the PC."

Verizon has Failed to Properly Upgrade and Maintain Most of its Territories.

Based on Verizon's own press releases, Verizon's FiOS fiber optic service only 'passes' 27%-50% of 'locations' in the states that the company controls the primary wired utility, such as Verizon Massachusetts. (And these numbers represent the 'high' scenario; the City of New York's audit of Verizon's franchise found major gaps in deployment, even though the company claimed these areas were completed.) 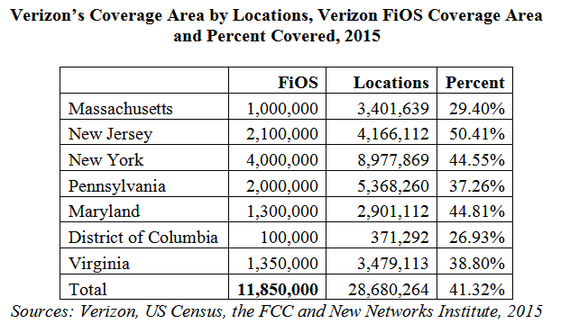 Moreover, the majority of copper-based access lines have not even been maintained and there are multiple investigations in multiple states over the condition of the networks.

In fact, except for the recent announcement to offer FiOS in Boston, Verizon has no plans of expanding its fiber optic services. In 2010, Verizon announced it was stopping the deployment of fiber optics, except where it had previous commitments.

In April 2016, Verizon announced it was going to spend a paltry $300 million over six years in Boston to bring FiOS fiber optic services--that's $50 million a year - chump change for a $132 billion dollar company. And in 2016, Verizon reiterated that it had no plans to do any other cities in Massachusetts, much the rest of their territories - the East Coast of America, from Massachusetts to Virginia. (Note: Verizon controls only part of Connecticut.)

Shouldn't the priority be to make sure that Verizon does not divert billions from what should have been done--to fund new ventures?

This is only part of the problem.

Verizon is Using the State Utilities as its Own Cash Machine.

Instead of upgrading and maintaining the networks, the plan has been to make the state utility, the wired networks, act as the bank to fund its other lines of businesses--at the expense of building out the infrastructure in cities.

And Verizon has done this via a series of actions that are not obvious and that have mostly been hidden from view. As we tracked:

NOTE: Special access services are not special but are the wires and services used by banks for ATM machines, as well services used by competitors, such as Sprint, to offer wireless competition. Also, there are multiple buckets of special access revenues. This discussion only covers the 'mostly' copper, TDM services. According to the FCC, in 2013 this represented $25 billion nationwide and was the majority, 60%, of the special access market.

But, if you want crazy, the details from the Verizon NY 2015 annual report are red flags that should have triggered immediate investigations. "Local Service" revenues are derived from the copper-based, basic phone service as well as ancillary services, such as non-listed numbers. Verizon New York's Local Service brought in only $1.3 billion. Yet,

Local Service, then, through a regulatory shell game, became the dumping ground for the majority of all expenses, and it allowed these other lines of business to have massive profits.

So, in this convoluted mess, a) Verizon has obligations to upgrade and maintain the networks and b) instead uses the local utility as a bank to fund its other lines of business. Verizon's goal is to c) build the wireless business but also d) separate the 'special access' wires that are used for their wireless and gouge others who rent these BDS lines and services, while e) making the networks appear to be unprofitable--caused by funding the various lines of business in various ways.

And even the Boston fiber optic announcement has as sub-plot. Verizon told Beantown it was doing fiber to the home, but it appears that instead, it plans to use the fiber optic wires for its 5G, fixed wireless plans.

In the end, the profits go back to corporate, which can then be used to fund the purchase of Yahoo, which is all about creating a new revenue stream by selling advertising and gathering information about the subscriber, (which has privacy implications).

Returning to Yahoo and AOL:

And now that the wireline company believes it is actually a wireless company, it should also offer entertainment and advertising over the wires and wireless services that they control. Needless to say, there is no wireless without wireline.

Thus, the company bought AOL for $4.4 billion and it may buy Yahoo for $4.8 billion - that's $9.2 billion dollars spent - not on network upgrades and infrastructure.

Verizon has been at this wireless 'entertainment' play for awhile with Go90, which was launched as a 'mobile-first' service and so far it has been a yawn.

"Go90 is a social entertainment platform built for the mobile-first generation. It offers access to live and on demand videos, wrapped in a social experience.

"Some of the content you can expect to see on Go90 includes: live events, prime-time TV, best-of-the-web and original series across comedy, music, gaming, lifestyle, sports, news and entertainment.

Cross-Subsidies and Vertical Integration of the Lines of Business

The details I just laid out reveal how Verizon has 'vertically integrated' all of its services to give massive financial advantages to its own subsidiaries at the expense of all competitors - as well as customers.

Instead of building critical infrastructure in its franchised territories, it has been able to, through a financial shell game, build other lines of business--and charge customers for the privilege, which didn't benefit them; it just raised rates and helped to block serious competition in multiple markets, which has implications, especially for low income consumers.

Adding content, entertainment and other services means that the company is no longer focused on the local customer or even their franchised areas; instead, the wired 'local service' and 'special access' customers are now funding these other lines of business.

What would happen if there was an audit that tracked the flows of money--revenues, expenses and profits--of Local Service or Broadband Data Services (that both use the same identical telecommunications network infrastructure)?

What would happen if we track the construction expenditures of the state utilities - and the building of the wires to the cell towers for Verizon Wireless and soon the 'fiber-to-the-antenna' for the densification of coverage necessary to offer the new 5G fixed wireless broadband services (if they ever show up)?

And what would happen if there are audits that examined how the vertically integrated lines of business took financial advantages of the state utility franchised holdings--where cities were not properly upgraded and the wires not maintained.

In the end it comes down to one question--Verizon controls the telecommunications networks for the entire East Coast of America--from Massachusetts to Virginia. Should Verizon be allowed to purchase Yahoo, and enter other lines of business that divert billions away from properly upgrading and maintaining critical infrastructure?