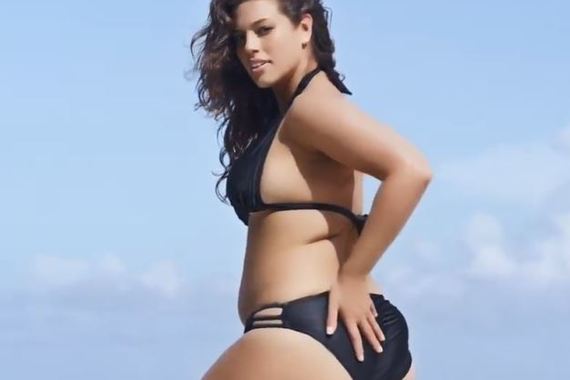 Model Ashley Graham, who will be gracing the ad pages of the upcoming -- and saliva-inducing -- Sports Illustrated swimsuit edition, is brunette, tall, busty, and plus-size.

Now quick, guess which one of these features has landed her in the news?

That's right, Graham's curvaceous, bootylicious, meat-on-the-bones body -- or, if you'd prefer, her physical normalcy -- has made her an Internet sensation. Finally, all those size-0 smolder-ers splayed out on the sand will be joined by a woman who's... not a size 0!

All snark aside, this is honestly great news. As a size-12 to -14 girl myself, I'll take any victory for women of a certain body type I can get, however problematic that victory may be.

To put it succinctly? I hate the term "plus-size."

Like so many other terms in our cultural lexicon ("transgender" or "disabled"), "plus-size" negates normalcy, positioning these words and the people whom they describe directly at odds with what society has fallaciously and damningly peddled as "desirable." There are regular people and there are "plus-size" people. If you're in the latter camp, kiss any hope of desirable normalcy goodbye.

I am far from the first woman to rant and rave about this loaded term -- and not surprisingly, many have tried to come up with something entirely different to describe women who don't conform to the thin ideal.

Here are some of the most pervasive and interesting ideas that have been kicked around and what I -- as a "plus-size" woman -- think of them.

There's a lovely egalitarian spirit to this idea. But, well... it's also really really awkward. How would the news of Graham be shared if this were the term of choice? "Her Size Model To Grace The Pages Of Sports Illustrated"?

Like "queer" and "cunt" before it, some women have started re-claiming "fat, with even "fatshion" becoming a (dubious) thing. Look, I totally get the motive behind this -- "Calling me fat, huh? Well as a matter of fact I am, and I love it!" -- but if you think I'm ever going to call myself a "fat woman," well, you can just kiss my fat ass. "Fat" is what I was called in middle school when I retreated to the bathroom stall to sob while I ate my packed lunch. I ain't ever going back to that state of mind -- and I can't possibly be alone in feeling this way about such a historically malicious word.

Turning the whole "normal/plus-size" paradigm on its head, there's also been a push to simply call plus-size women normal. But while this is technically true -- the average woman is a size 14 to 16 -- it doesn't do anything to subvert the divisive paradigm itself, which is really where the problem lies. If women who happen to be bigger are "normal," what does that make women who happen to be skinnier? Robin Lawley, Australia's first plus-size model, has suggested that, if bigger women are "normal," skinnier women should be called "minus size" -- which shows you just how quickly this "empowering" terminology can devolve into derision.

Graham herself will grace the pages of Sports Illustrated in a "swimsuitsforall" ad (accompanied by the hashtag #CurvesInBikinis), as shown in the steamy video below:

This term is probably my favorite of the bunch, as it implies bigger women come endowed with a certain va-va-voom sexiness (see also: voluptuous, Rubenesque, bootylicious, et. al.). But, it still perpetuates that damning "us against them" mentality. If bigger women have the sensual curves, where does that leave skinnier women? And anyways, can't thin women have curves, too?

Which brings us to...

Alternatively, here's an idea: Forget the label altogether and stop trying to call women anything other than what they are: human beings inhabiting the body they've been given. On a day to day basis, I don't personally identify as "fat," "normal," "her size," "plus-size," "curvy," "voluptuous," or any other term that society has tried, with presumably good intentions, to define me by. I'm just me: physically imperfect, healthy-most-of-the-time, frequently hungry, occasionally-bikini-wearing me.

Consider if today, we had instead read this arresting headline: "Beautiful Model Ashley Graham To Join Other Beautiful Models In New Sports Illustrated Swimsuit Edition."