At June 10th, the Central Bank of the Russian Federation cut the benchmark rate from 11% to 10.5%, citing lower inflation and Ruble resilience as key factors. The Central Bank Governor, Elvira Nabiullina, shifted her growth outlook, to -0.3 and -0.7% much less steep than the earlier forecast of a -1.3% contraction. Inflation expectations were lowered from the current hyper levels of roughly 7% to 4% by 2017. The combination of a cautiously optimistic outlook from Russia's central bank and relative stability in oil, Russia's main source of income, raises the obvious question: Are Russian stocks a good investment?

To answer that question, we must focus on the following:

• Oil and the Ruble
• Putin's next move

Oil and the Ruble

The first factor to consider is, of course, oil. Not only is oil Russia's biggest source of income but it's also the largest sector. Hence, for the Russian stock market, and more specifically, the MICEX, the Russian stock index, to perform well, oil has to be on solid footing.

Oil has been stabilizing recently, in part because supply growth has stopped. Prices have been gaining momentum and Brent contracts now trade at $47 a barrel, 74% higher that the January lows. But oil now faces tough resistance at the $50-55 price zone. As the global economy is showing signs of softening, breaking above such a tough resistance zone is a challenge. Hence, the upside potential for oil, at this stage, once again seems limited.

The impact of the Russian Ruble on Russian stocks is slightly more complicated than oil. A weak Ruble tends to benefit stocks that trade in Rubles. But when we measure the performance of Russian stocks in US Dollar terms, the picture is different. The rise in stocks does not compensate for the fall in the Ruble.

On the one hand, a stronger Ruble tends to create headwinds for stocks. That's because the stocks that dominate the MICEX index are earnings that are priced in USD and every time the Ruble gets stronger, the profits in Rubles decline. But, if Oil prices rise in tandem with the Ruble or if they rise more than the Ruble, that negative impact is cancelled out and Russian stocks can rally, as well. The problem, as we can see in the Netdania chart, is that when oil prices fall the Ruble tends to fall more and that hits Russian stocks twice, with lower oil lowering profits for oil stocks and with a lower Ruble making Russian stocks lose value in Dollar terms. 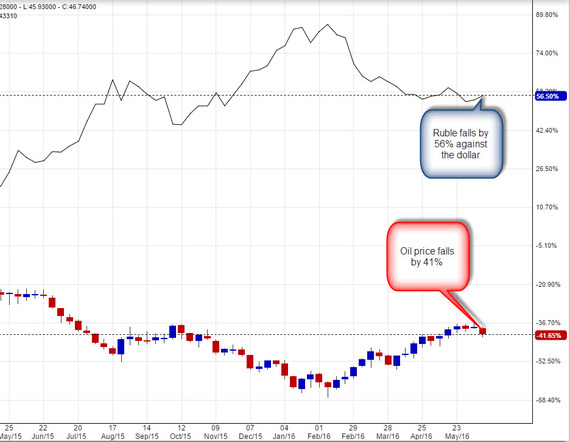 Consider that oil has an increased chance for correcting to the downside and also consider that risk aversion is putting pressure on emerging market currencies such as the Ruble. Given that, it becomes clear that both oil and the Ruble, at least at the moment, are a headwind for Russian stocks rather than a tailwind.

After an invasion into Ukraine, annexations of Crimea and a military campaign in Syria, the inevitable question is what will Russian President Vladimir Putin do next? No one, except perhaps Putin himself, knows the answer. And that is the real wild card. But here are some disturbing facts--Putin has warned Poland and Romania they will be in the midst of crossfire after both countries agreed to place NATO missile batteries on their respective territories. Russian warplanes constantly buzz US warships in the Black Sea as provocation and Russian spy planes are regularly intercepted in close proximity to the UK's air space. That is a clear sign that Putin wants to maintain tensions rather than reduce them. That leaves the door open for plenty of things to go wrong for Russia and for Russian stocks. If another escalation between Russia and the US and its allies occurs, it's unlikely that Russian stocks will weather it well, regardless of oil.

How will it all play out?

The only factor that plays for Russian stocks and the MICEX index is a relative low valuation, with most Russian stocks trading at multiples as low as X5 compared to the S&P500's average of X18. But that is where the good news ends. With oil possibly heading for another correction, the Ruble vulnerable and Putin, being a wild card, it's 3 out of 4 against investing in Russian stocks. Despite the temptation and the possibility of a big gain, sometimes, even in the game of high risk high reward, the risk is just too high. And with Russian stocks, unfortunately, that is exactly the case.