Sure, it was an ancient superstition that bad luck would soon follow if the groom saw the bride in her gown before the wedding. And in today's modern world some couples still wrangle over the question whether to see each other prior to their ceremony -- but mostly for other reasons.

It's safe to say that most of the world's weddings couples already see each other as part of the wedding day process. In many cultures and religions, couples meet before the ceremony for rituals such as tea ceremonies, ketubah signings and garland ceremonies... and bad luck doesn't necessarily follow (upon further investigation it turns out if bad luck does follow it's always because of something that happened when the bride and groom saw each other after the wedding, not before. But I digress).

Yet other brides weigh in on the question citing tradition or talk about wanting to keep the mystique. Still, meeting earlier for photos does get you to your party sooner.

But there's one even bigger aspect to seeing each other prior to the ceremony that never seems to get talked about although it makes the biggest difference to the couple. And it's not about making more time for a cocktail hour or having "that" moment when she walks down the aisle.

No, it's about something bigger than all that. Something far more meaningful to the couple. Two things, actually. So let me show you what they are.

Even though I've photographed hundreds of weddings (I stopped counting at about 1,000) I've seen this over and over again. Here at this particular wedding (shown below), the bride and groom weren't going to see each other prior to the ceremony because they wanted to keep to "tradition" and they wanted to make that moment when they first saw each other, special.

But at the very last minute they had a change of heart.

By the way, I've often noticed that while many times people schedule their portrait session at the same time as their cocktail hour, no two other events of the wedding day are ever simultaneously scheduled. So let me propose we start now a new trend where the ceremony and the cocktail hour are scheduled for the same time. I believe guests may enjoy a cocktail or two and an appetizer while watching you two get married. Don't you? So please run this idea past your wedding coordinator and even if he or she says no, ignore them and let's get this thing going! Be the first one on your block. Be a trendsetter.

Back to my story. This couple met up earlier on their wedding day for their "First Look." And so they got "that" moment, in fact they were immersed in that OMG moment in a way they couldn't have been if the ceremony was happening. They enjoyed this alone time more privately away from the crowd, were free to enjoy sweet sentimental moments together... all good. Which by the way also makes for some special memories. And photo opportunities.

In fact you can see how high their emotions ran right here in the seconds before their First Look: 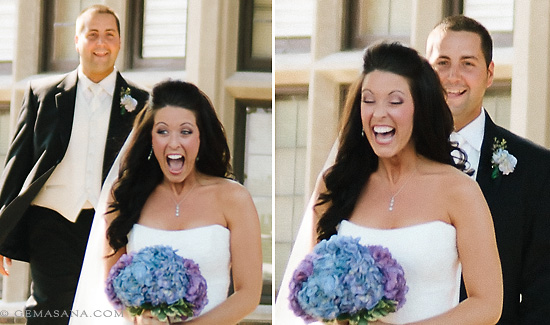 Obviously, meeting earlier free from the needs of the ceremony gives you more personal moments and experiences, adding memories to your day. Good stuff.

Everything that happens during the First Look is a unique experience you wouldn't have had if you didn't take that opportunity to be with each other. And that's the first plus I wanted to tell you about.

But now, afterwards, when it came time for their ceremony -- do you think the time they spent together earlier took any shine off the magic?

Well I need to tell you, it sure didn't.

Though he had spent an hour with her already, here's the photo I took when his bride made her appearance at the top of the aisle. Check out the expression on his face: 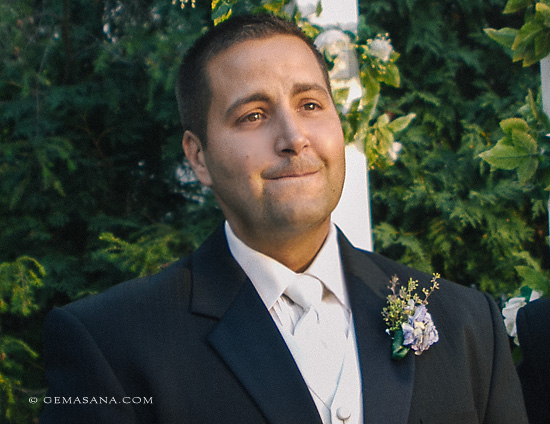 His eyes are tearing up. His lip is quivering. He's feeling it. And since I was there taking that photo I can tell you when she turned the corner and came into view -- these two immediately locked eyes on each other. They were beyond riveted with each other.

It was as if there wasn't a single other soul in the crowd -- despite the fact there was a huge throng of guests packed between them. Didn't matter. His eyes were only on her. And hers were only on him. 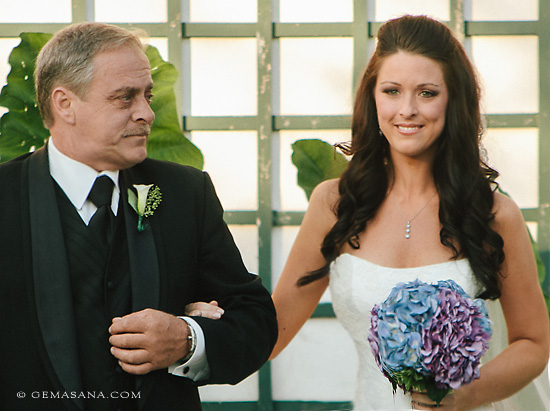 You could literally feel their energy.

Now you may think that the moral of my little story is "and so Dear Reader, having a First Look doesn't take away the magic later" and that is the second point I wanted to tell you about. But it isn't.

I realized spending that quality, personal time together earlier on in the wedding day ramps up and fuels the emotions for when the magic moment finally comes when you see each other at your ceremony.

It can add more anticipation, electricity and passion to your ceremony. Because it adds it to your heart first.

All of which gives you many more unique moments of your day to experience, more emotions for you to bask in -- and many more memories for you to cherish.