Last week Alphabet, formerly known as Google, announced that it is seeking "Cities with large swaths of land they want redeveloped - likely economically struggling municipalities grappling with decay - perhaps through a bidding process."

Sidewalk, their partner, would "build up the districts, which are envisioned to hold tens of thousands of residents and employees, and to be heavily integrated with technology." The aim is to create proving grounds for cities of the future, providing a demonstration area for ideas ranging from self-driving cars to more efficient infrastructure for electricity and water delivery.

We have been inundated for years with the promise of the smart city, the connected city, the digital city, the city of the future ... ad infinitum, ad nauseam perhaps.

Yet in a way, the smart city is starting to have appeal in cities all over the world. You only have to look at Barcelona with its "Street sensors help(ing) motorists find parking ... provid(ing) data about parking patterns, and helping officials improve management of urban mobility." Or experience the Hong Kong wireless system that has "28,000 Wi-Fi hotspots ... one of the highest concentrations of Wi-Fi hotspots in the world." 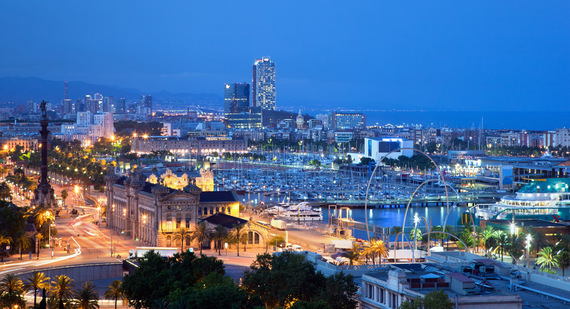 But there are problems, not the least of which is the layers and laws of state and local government, not to mention the fears of citizens who aren't always sure the use of sensors and ICT is in their best interest. Take Singapore's plan to use "sensors and cameras across the island city-state that will allow the government to monitor everything from the cleanliness of public spaces to the density of crowds and the precise movement of every locally registered vehicle."

Not everyone thinks it's a good idea according to a recent report in the Wall Street Journal.

Although the government "says it isn't certain what kinds of applications might be possible once the system is built, and hasn't decided where all the sensors will be located, raising privacy concerns." Vivian Balakrishnan, Singapore's foreign affairs minister and minister-in-charge of Smart Nation admits "The big, big elephant in the room is protection of privacy and ensuring security."

Building a city on the moon might be easier said, Sanford Goodkin, a San Diego based land-use expert who is well aware of the competing rules and regulations when almost anything new is being built in a city.

Much of the problem, thinks Alphabet among other providers of broadband infrastructure and the Internet-of-Everything (IoE), is not so much about local laws or citizen fears as it is getting more people to envision the future; to understand the stakes of welcoming the future of the truly smart city.

And what a future it can be.

IoT where everything is connected to almost every other thing is providing cities and their elected officials with the tools to ensure safer cities, better transportation, health care, energy and water conservation, clean air, and environmental services. Together with what is called Big Data analysis, it can serve to make the city government more transparent - not less -and encourage individuals and companies to develop innovative products and services; and importantly, engage the general public that saves taxpayer money as well as serve them better, faster and provide services more cheaply.

The idea seems a good one.

People need to see and touch the future, interact with the future not just read about how good life and work will be. Governments, too, need to be part of the effort to help their citizens understand how critical IoT is to their wealth and well being.

Hopefully others with non-competing visions of the smart city, could collaborate and create a total experience. Maybe its too much to ask Alphabet but it seems more sites would be open for development, more companies could be involved, and more applications tested. Alphabet would not have to all its eggs in one basket, and it certainly would be more valuable to the intended buyer, and their citizens too.