Those components, of course, were already abundant in the 1995 movie, a critical and commercial disaster that all but destroyed the then-promising acting career of its star Elizabeth Berkley. Simply titled “Showgirls! The Musical!,” the McSmiths' unauthorized send-up holds the plot of the film up to a distorting mirror of parody, cranking up the sexual innuendo and irreverent sense of humor -- even unearthing a few nuggets of cheeky wisdom along the way.

Now playing at New York’s Kraine Theater, “Showgirls!” isn’t the McSmith team’s first crack at musicalizing a Berkley project. That honor goes to "Bayside! The 'Saved by the Bell' Musical!,” a similarly unconventional take on the 1990s teen sitcom which made a star of Berkley as well as Tiffani Thiessen, Mario Lopez and Mark-Paul Gosselaar. The success of that collaboration, along with its star April Kidwell’s uncanny resemblance to Berkley herself, laid the groundwork for the “Showgirls!" production.

Check out photos from “Showgirls! The Musical!,” then scroll down to keep reading:

“We wanted to do something with more nudity than ‘Saved by the Bell,’” Tobly told HuffPost Gay Voices just ahead of the show’s April 17 opening night. Referencing a line from the film, Bob said the material felt ripe for the musical parody treatment: “We couldn’t write anything funnier than ‘I used to eat doggie chow.’”

The resulting show, which follows other recent movie parodies-turned-musicals like “Silence! The Musical” and “Triassic Parq,” isn’t likely to lure the tourist hordes away from the family-friendly confines of Broadway. But the attractive, talented cast members (each of which appears in varying stages of undress) tackle the show’s zingers -- found in tongue-in-cheek numbers like “Let Me See Those Tits,” “Dead Hooker” and “F*cking Underwater” -- with brass and aplomb, making “Showgirls!” a saucy, pleasurable romp despite the theater’s spatial constraints.

In the role of Nomi Malone, Kidwell not only captures the snarling expressions and exaggerated delivery that have become synonymous with Berkley’s unintentionally hilarious turn in the original film, but also reveals some fiercely acrobatic pole-dancing skills. Also impressive is Rori Nogee in the role of Nomi’s arch nemesis Cristal Conners, while Philip McLeod is a delight as Gay, a swishy yet sinister choreographer (and a composite of several characters from the movie) whose “Thrust It” number neatly sums up the show’s overriding motif.

Musically, however, the tunes in “Showgirls!” cry out for bigger treatment than the 99-seat Kraine Theater will allow. At present, accompaniment is limited to the songwriters on guitar and bass. While the stripped-down approach is inevitable given the theater’s tight space, a legitimate assessment of the show’s melodies seems almost futile, particularly without the percussion necessary to sustain Jason Wise’s bump-and-grind choreography. Despite the best efforts of the performers onstage, the songs won't resound beyond the walls of the theater, at least in their current incarnations.

Ultimately, “Showgirls! The Musical!” is a show written by a pair of fans for the fans, and unlike the movie, never asks its audience to be taken too seriously. Aware that their source material is a veritable gold mine for laughs, the members of the dynamite cast make “Showgirls!” a memorable night of downtown theater, even if the songs they're singing are occasionally beside the point. Whether you’re seeking legitimate farce or just some old-fashioned, gratuitous nudity, “Showgirls!” satisfies. 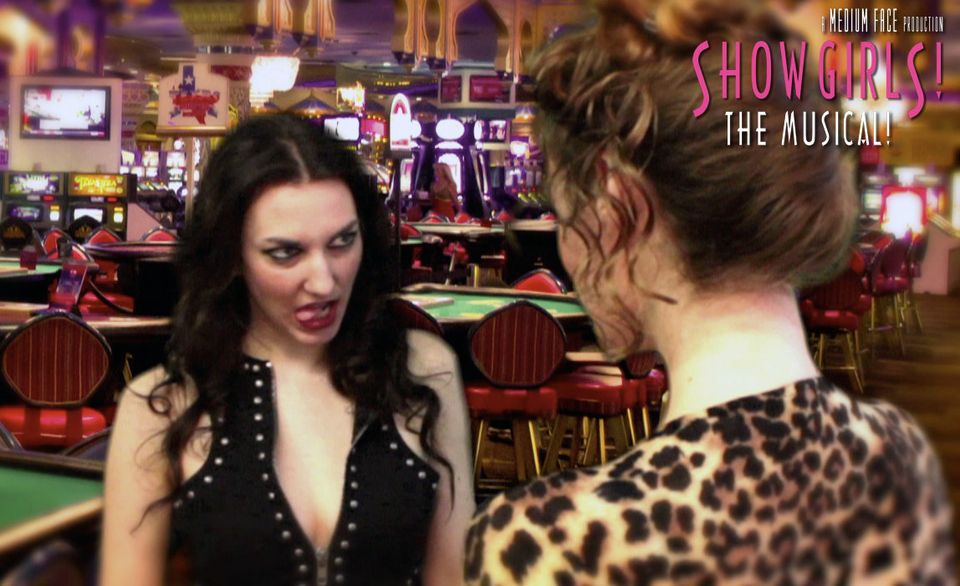