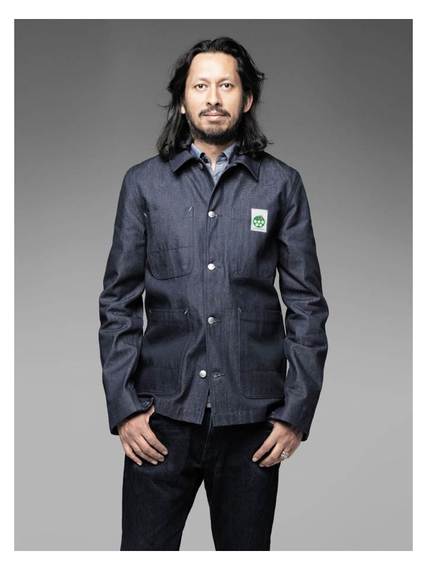 You started out as a scientist before moving into fashion. What sparked that transition?

I started out at the university in Manchester in the '80s studying chemistry, but I loved music. So I started working for the Hacienda nightclub as a busboy, which was a venue for Factory Records, and their club was like a spiritual experience with music. I was in that world inspired by and exposed to underground youth culture & music, while it was still underground. Then I graduated, worked as a Scientist and eventually got a job at Levi's, where I used my inquisitive science brain to rethink the alchemy of branding, and change their advertising. My five years at Levis were a major education in branding and how to work in big companies.

I then got an offer to re-invent the brand image of Caterpillar and did the opposite of what everyone thought I should do. I set up a whole new image for Caterpillar shooting only real people, in real places across America. It was more to do with a purpose to showcase a global multi-cultural reality rather than commercial advertising.

The first campaign everyone hated. They didn't understand how I could really be serious about proposing a campaign that didn't have any white people in it and only showed an urban multicultural reality. At that time in the 90's advertising was still a hallucination of reality featuring good looking models. This created a creative struggle between me and the top guys at Cat Inc, who rejected it. To my saving grace, Caterpillar's distributors ran the campaign because they had a growing footwear business and they wanted to appeal to the young people who were buying these work boots as a sort of club fashion statement. Their businesses ended up growing by 50%. It eventually became a case study at Oxford University.

When I went on to work for Camper, I had two kids, and asked to move out to the countryside to better understand the brand's outdoor lifestyle. We created a global ad campaign, a magazine and short films where we emphasized bioplastic materials in the shoes, we worked with NGO's and basically did everything opposite of what had already been done; a contradictory approach to social capitalism. I realized you could make a brand that says that it's cool to give a shit, not just that it's cool.

Can you talk a bit about G-Star's 'RAW for the Oceans' initiative?

At G-Star we had been introduced to Pharrell Williams through a Parley for the oceans event. He is an accelerator, rather than an endorser, for the campaign to draw attention to the world's ocean pollution problem as well as co-designer of the collection. We take post consumer waste(ocean plastic), collect and process it, make a yarn through Pharrell's Bionic fabric company and mix it with cotton, which G-Star can then weave into denim. We can make a big impact using a universal clothing piece like denim and amplify that impact with Pharrell. So unlike a lot of sustainability initiatives, we make it a condition for doing business. We're not giving the dream of sustainability, we're living its reality. You get this crude, but effective system of remaking the branding model where the audience can wear the responsibility. You have a product with a purpose.

Capitalism has not gone wrong because business is bad, it's just that business hasn't done a great job educating the consumer. At G-Star, we decided to ban plastic bags in our stores and switched to recycled paper. We then banned plastic bottles in all our offices. We're finding a way to actually practice sustainability and incorporate it from the back end to the store front. Conspicuous consumption to conscious consumption becomes conscious capitalism.

What do you think is the most important element in conveying a brand's image and emotional evocation?

What moves brands is multi-level: aesthetic and look, functionality and technology, and emotional connection.
Many modern fashion brands are based on an analog world of manufacturers. But now, it's no longer okay to have a great product and a cool message; that's not enough. The world has shifted. Now you have to be a content producer with the ability to reframe the context for the product, then find increasingly sustainable ways to keep that product category alive. When content becomes king, the most important media channel becomes you.

What do you feel is the biggest paradigm shift you've experienced when seeing something differently changed your life?

When we moved from London to Majorca, Spain for my work with Camper, it had a very psycho-geographic effect on me and drove my creativity. I came from London where everyone was cool, all fashion was fast, and consumption was conspicuous. I was in that world, but I learned by being in the countryside and hanging out with painters and alternative thinkers how to make something quite opposite of that world. The emotional impact of nature helped me to realize that modern consumer status is much less to do with what I have like a fast car or trophy wife but much more about who I am.

What advice do you wish you could've given to yourself when you were just starting out?

The best advice I could have given myself when I was young was to be okay about being pushed out of my comfort zone and to just keep moving, always. Because you get such diverse input by moving between different worlds, you stop making the same old shit, which makes your work more meaningful. You've got to keep flowing like the ocean.

What kind of legacy do you wish to leave behind?

To be a good person, to raise good kids and to do some good deeds along the way. Anything more than this is a bonus.

When you see magic in a campaign, you think it just ended up that way. Sitting down with Shubhankar was a front row seat to what a creative exposes himself to in order to create that magic. The connection that he has developed with himself has allowed him to have a deeper connection with the world around him. It is not something that is forced or fabricated. It is real and flows -effortlessly. Few and far between do we encounter people who have the capability to enroll a mass group of people and redirect that energy to something meaningful. When we do, we consider ourselves lucky.