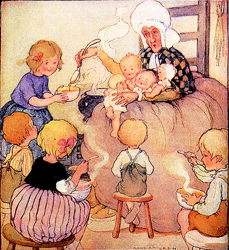 Enough is enough. Unemployed single mommies should not be giving birth to litters of half term, in vitro fertilized embryos. Especially when they already have a brood of six and are forced to live with their own mother who has filed for bankruptcy, claiming one million dollars in liabilities. I'm talking of course of Nadya Suleman, recent matriarch to America's latest batch of octuplets, AKA the "Suleman Babies: A to H." Call me old fashioned but your progeny's monikers should not take up a third of the alphabet, particularly a wombs worth. Quick Pick should not be a viable option when naming your kids.

Not surprisingly the family is on the defense. Her mother Angela Suleman pleaded that her grandchild machine "is not evil, but she is obsessed with children. She loves children, she is very good with children, but obviously, she overdid herself." No sh*t! Did it not cross her mind perhaps to take up a career in teaching or daycare? That she did not have to gestate and pop each one individually out of her overburdened, unequipped body. I mean what is the point to such a sizable batch of offspring in our age? Does the family have 40 acres to plow with a mule? Are we starting a baby arms race with China? Is she personally raising her own regiment of Joel's Army for when the Rapture comes and we all have to move to Alaska and wage Holy War with the Wicked for Salvation?

With all of the knowledge and technology of modern medicine at their disposal, the doctors themselves were still allegedly surprised to find an eighth infant during delivery, as they were only expecting seven. That's insane. We are beyond the brink of breaching biomedical ethics here. For God's sake what do we need the sonogram to say, TILT!? I mean the incubation fees alone rival a Con-Ed bill for a Hydroponic Grow House in Humboldt County. Nadya has actually had to resort to using donated breast milk to nourish her scions, bringing the long lost Middle Age art of Wet Nursing back into prominence. And we have recently been comforted with the information that they are now all finally breathing on their own. Amazing that the metabolic process of inhaling and exhaling is now considered a portent of a healthy future!

It has also been reported that Suleman has a degree in Psychology and hopes to continue to work towards a Masters Degree. Well it's nice to hope for things isn't it? Because unless they're giving out M.F.A.'s in Similac Dispensation, Feces Cleanup or Stewed Pea Upchuck, I think I hear Avon calling.

I mean its ridiculous. A baby momma 14 times over should not be living with her parents in a modest 3-bedroom house in Bellflower, California. It is not appropriate. Someone needs to find this woman a sizable shoe to grow old in with her spawn along with a lifetime supply of broth and a good rawhide whip so she can raise them right.