Jen Aniston is the Wendy Whiner of celebrities! Here's what real people have to legitimately complain about these days - UNEMPLOYMENT, losing their homes, losing their savings, watching their hard-earned investments plummet in value.

Here's what Jen Aniston, who's worth at least $100 million, IS complaining about... again - her coverage in the press. The gorgeous, taut , toned and tanned A-Lister, whose been making the TV and magazine press rounds in support of her upcoming Xmas film, Marley & Me, has been a veritable font of new gripes. 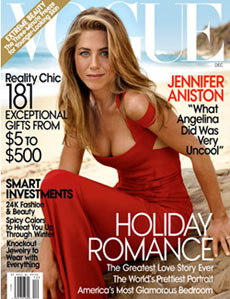 First, she dissed her romantic rival, Angelina Jolie in Vogue's December cover story -- "What Angelina Did Was Very Uncool." Then she continued to diss the press in the piece for or not understanding that she's more than just a "tabloid girl" - this "Poor, lonely Jen thing", and now she's dissing Vogue itself.

"I was just surprised that Vogue would go so tabloid", she told Entertainment Weekly, in its extensive new cover feature. " I was bummed, but you almost expect it, "she whined on.

Don't you just feel so sorry for poor, hard- done -by Jen? Imagine, for her Vogue cover, she had to sit for renowned fashion photographer, Craig McDean, in a stunning red Narciso Rodriguez gown, and have thousands of dollars worth of hair and makeup styling (almost as much as Sarah Palin). Then SHE actually told her Vogue interviewer that Angelina was uncool, but she's still a victim. She never expected that the magazine would smartly put her newsstand--friendly remarks on the cover!

Furthermore, Jen then sat on Oprah's couch and kvetched that Vogue's cover age of her was "so not in Vogue."

I really have to congratulate Jen. She's perpetrated the most fantastic press dissathon circle I've ever seen. And it's extraordinary in its boldness. Does Jen realize that by calling Vogue , a tabloid, that she's also insulting Vogue editor-in-chief, Anna Wintour? 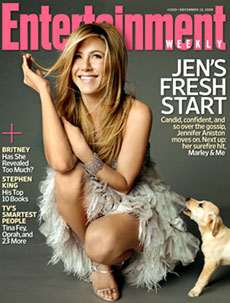 Speaking from experience, I can tell Jen that no magazine editor-in-chief wants to hear their publication be referred to as a tabloid. Imagine how Anna feels.

In the world of magazine covers, most actresses would rank a Vogue cover as the pinnacle of their press careers. I can tell you that there are a lot more than 12 female Hollywooders a year who are vying for one of those prestigious monthly slots.

Then Jen, I have to ask you - for someone who drones on about the hardship of life in the public eye -- "the way I gauge it is, are there six cars behind me today or not?" she tells Entertainment Weekly, as well as objecting to Team Aniston t-shirts which she derides as catty - WHY do you keep talking at all about Brad and Angelina?

If you really don't want to be in the headlines, why don't you zip your lips about your ex and his baby momma. Every time you utter a word about either of them, it fuels the fire, even if you claim magnanimously on that little tv show, Oprah, that you're now proud of Brad. Have you noticed that Brad never says anything about you publicly?

I suspect Jen, that you are a secret press hound, and wouldn't have a clue how to really live anonymously just like us. So wouldn't it be refreshing if you either a) took the Angelina approach of admitting that living with paparazzi is a small price to pay for the benefits of fame and fortune or b) just laughed and admitted, "I love the limelight."