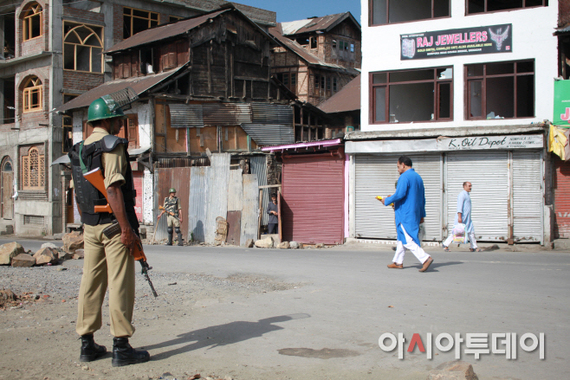 By Jeong In-seo, New Delhi correspondent, AsiaToday - The death toll of the anti-India protests are rising in Srinagar, the largest city of the Indian state of Jammu and Kashmir.

Srinagar, which is called the city of lakes with its beautiful picturesque Himalayan backdrop and glittering lakes, was as silent as the grave when I arrived on August 23.

Only six passengers, including myself, was on board despite summer was the peak season for the city.

Communication was cut off upon arrival to Srinagar from New Delhi, which took 90 minutes by plane.

Tens of thousands of fully armed forces patrolled the region and erected barbed wire and steel barricades on roads. All the shops in the street have remained closed. 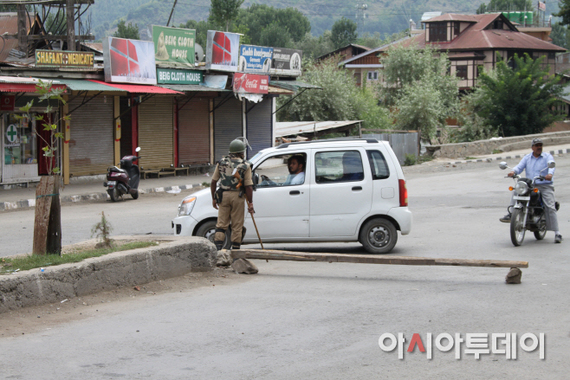 [A police is checking passers-by in a road in Srinagar./ Photographed by Jeong In-seo]

Our car was questioned by patrolling policemen for a total of 13 times to get to the Arabia Royal Hotel located in Kayam Road, which is in between the new town and the old town. Every time we were questioned, the police opened our bags and inspected our car. Hotel manager Nadeem Khan welcomed the reporter in amazement, and said, "This is the first time we receive our guest in forty days since the protests have begun." He said, "We are sorry but our restaurant is not available. We sent our chef home because we had no guest since the protest began. Electricity has been cut off in most of the houses. So we run a generator and use only two hours a day."

I headed to the old town where protests were taking place to understand local circumstances. There were some residents sitting on the streets where shops were closed and windows were broken. When they saw me, they came. One resident, who requested anonymity, worriedly said, "It's strange to see a stranger after a while. This place is dangerous now. You can be hit by stones."

From the entrance of the old town, I was able to see the police running an inspection. A police officer, who requested anonymity, said, "We don't want any protests to take place. But protests are taking place almost every day, and we should confront with the protestors. Protests are being held for 46 days. There was a massive protest yesterday, which had caused the death." 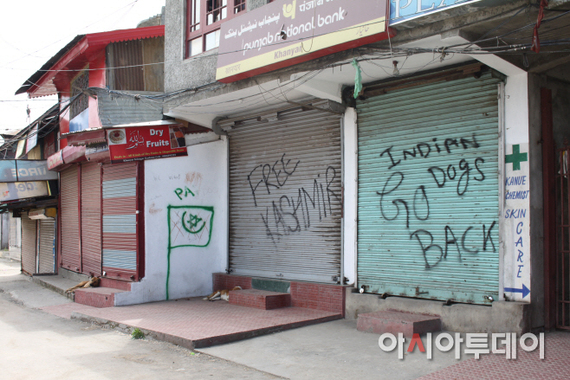 [Anti-India phrases are easily found in a roadside of Srinagar's old town./ Photographed by Jeong In-seo]

As I got closer to the old town of Srinagar, the atmosphere became increasingly heavier. Shops and businesses were closed and phrases shouting for Kashmir's independence were written on the walls. I didn't see any people walking down the street even though it was at noon. Only the police were watching out the street. A police officer who was standing guard at Jamia Masjid, an important mosque in Srinagar, said, "A massive protest was held here yesterday. 12 people died in the process of repression. The protestors are aggressive and willing to kill us. They throw stones at us." 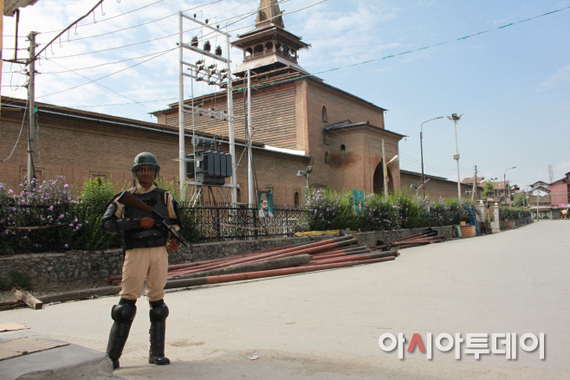 [A policeman is standing at Jamia Masjid, an important mosque in Srinagar. A massive protest rally took place here on August 22, killing 12 people in a clash between police and protestors./ Photographed by Jeong In-seo]

The police was not telling a lie. In fact, most of the police on the streets had broken protectors. Their helmets and riot shields were broken while emergency vehicles went busy.

On my way to the regional police station, I was able to meet local residents who were either selling beverages and breads or repairing shoes. Mohammad Rimku, a shoe repairer, said, "This place is usually beautiful. But it's a hell now." 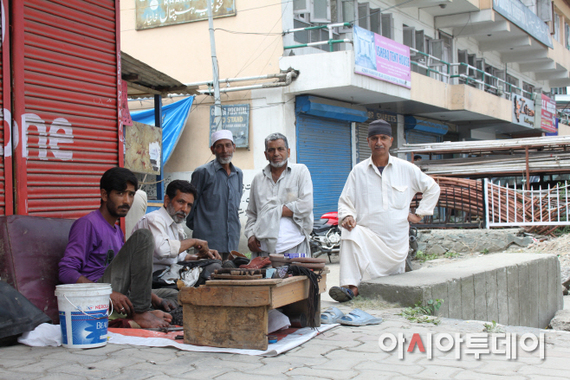 [The only store that was opened in the old town of Srinagar. I talked with residents about anti-India protests./ Photographed by Jeong In-seo]

He said, "The protests that had been held for nearly two months killed many people. We are dying as well. We are struggling to cope with shortages of food and other necessities. Due to the continuous protests, our children aren't going to school for nearly two months."

One resident, who spoke on condition of anonymity, said, "I fact, we don't want either India or Pakistan. We want freedom. We don't want India nor Pakistan, but complete independence. This is what most people think. We will fight for independence until the end."

As of August 28, all kinds of communication is cut out in Srinagar due to continuing protests.

The anti-India protests erupted on July 7, after Indian troops killed Burhan Wani, the 22-year-old leader of Kashmir's largest rebel group, Hizbul Mujahideen, which has been fighting since the 1990s against Indian rule. At least 70 people have been killed and 6,000 have injured in the clashes between the police and protestors.