The entire government will shut down in just about ten hours unless Democrats agree to allow House Republicans to hurl angry birds at every Planned Parenthood facility in America.

It's a strange position for Republicans to take at this point in budget negotiations, considering House Speaker John Boehner (R-Ohio) got the Democratic caucus to move in his direction -- for the most part -- on the actual spending cuts. Were it not for the fact that these policy riders are the hill he wants to die on, Boehner would be kitting out his feet in some comfortable shoes for a victory lap.

Earlier this morning, Senator Jon Kyl (R-Ariz.) had a needle-scratch moment when he claimed on the Senate floor that 90 percent of what Planned Parenthood does is provide abortions. The Huffington Post's Laura Bassett directed me to Planned Parenthood's 2009 Annual Report for a dose of material fact, and now I see that Ezra Klein has consolidated objective reality into a handy-dandy graph: 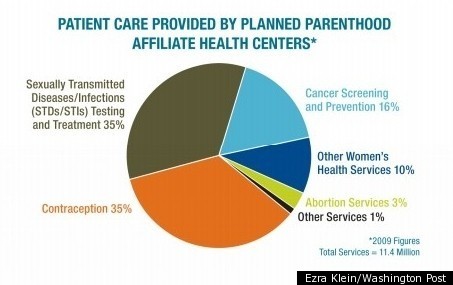 Yeah, I thought that Kyl was a little off. Or a lot.

You know what would help solve the fake 'deadlock' that may shut down the government at midnight? If Planned Parenthood could save money by not having to go state by state to defend legal abortion in courts from Arizona to Ohio to Missouri to Connecticut to Iowa. Since their public policy expenditures are something like $55 million, and Planned Parenthood's government contracts and grants are only something like $363 million, none of which is used to pay for abortion services, they could get closer to not needing your government money if half the states in the country would stop pushing stupid laws.

Emphasis mine, because as Klein points out, "federal law already forbids Planned Parenthood from using the funds it receives from the government for abortions."