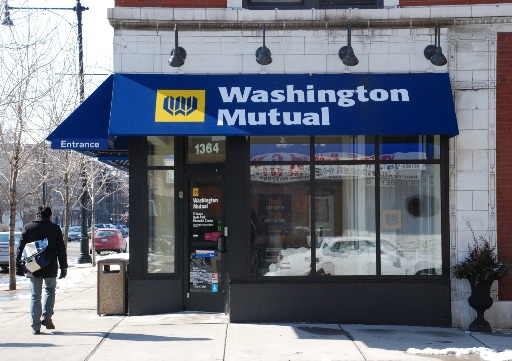 The story of the shuttered Washington Mutual branch at 1364 E. 53rd Street is not unique. It was repeated all over the city of Chicago and nationwide during the five year boom in bank-branch expansion. The boom saw corner cafes, fashion boutiques, dry cleaners, and other neighborhood retailers displaced by bank branches willing to pay top dollar for central urban locations, driving up lease prices and driving non-bank competitors out.

Filter Cafe at Damen and Milwaukee; the ladies' boutique at St. James and Clark; readers can undoubtedly supply many other examples of unusual local businesses replaced by sleepy offices with a few tellers and an ATM over the last half decade.

As of 2009, many of the local retailers that preceded the branches are long gone. The news is that now, many of WaMu's bank branches are going, too. Fifty-seven of them by March 2009. For the retail fabric of Chicago's neighborhoods, the outcome is a net loss. On some Chicago blocks, there is now less retail occupancy in 2009 than there was 5 years ago.

In 2004, as the credit boom was nearing its peak, a handsome though dilapidated brick building at 1364 E. 53rd Street was home to a number of rental units, and a ground floor fully occupied by five independent retailers.

In 2005, 1364 E. 53rd Street was purchased by a new owner, MAC Properties, and the leases on the ground floor retailers were not renewed. The retailers left, and in 2006 were replaced by a Washington Mutual Bank branch.

So turns the wheel of fortune. Is 1364 E. 53rd better now than it was before? Before: 5 independent, minority-owned businesses in a solid but run-down building, some of them delinquent in rent payments. After: a building preserved from the wrecking ball, refurbished, and returned to the market as rental units by its new owner, a building that now presents a quarter-block, 5,000 square foot stretch of empty storefront where the bankrupt WaMu branch used to be. 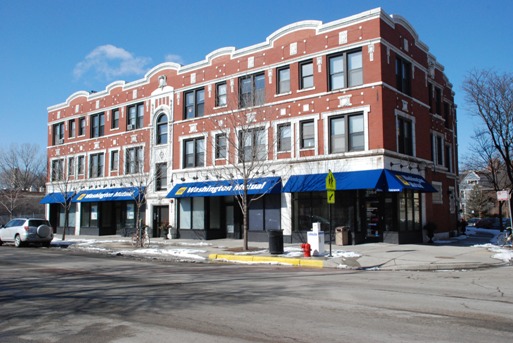 WaMu's branch expansion began in 2002 and was part and parcel of the high-risk, rapid-growth strategy that led the venerable thrift bank into the choppy waters of subprime mortgages, subprime credit cards, and other risky forms of lending. As the Chicago Sun-Times reported of WaMu Senior VP and Group Manager Tony Manisco in April of 2004, the bank executive was "focused less on deposits and more on customer service and profitability from checking accounts and mortgage loans."

Using a concept devised in Las Vegas in 2000, one of the housing bubble's epicenters, WaMu set out to be the Starbucks of retail banking, an off-site living room where you could bring the kids and sign on to a low-rate home equity line of credit at the same time. As Manisco put it in 2004, "They use the mortgage, home equity products as the initial point of contact ... with attractive rates, and then they try to add other products."

By 2005, WaMu's attempt to break into the Chicago market was being called out by analysts as a bust. By late that year, WaMu had built 147 Chicago branches from scratch, at costs of between $750,000 to $2 million apiece, but had carved off only 0.3% of deposits in the Chicago metro area.

Hyde Park's MAC Properties, in what was probably a riskier move than they appreciated, signed a lease with WaMu at about the same time that analysts began pointing out how WaMu's expansion had come up short.

In 2006 WaMu began closing branches. In 2008, Chicago home foreclosures on WaMu originated mortgages were outnumbering those of almost all other lenders, with 51 in February 2008, 64 in April, and 43 in September, according to foreclosure reports from the real estate website www.realinfo.net.

The ironies of history. Now we have a landlord at 1364 E. 53rd who had a tenant paying $32/square foot and now has nothing; had he kept the paying tenants cut loose in 2005, he would be in a better position. Instead, he signed with a financial institution that has gone down as the biggest bankruptcy in US history, which has caused the credit markets to freeze up, and a recession to accelerate, all of which make it highly unlikely that he will find a new tenant for the space vacated by the bank that drove the businesses out to begin with.

The viral spread of bank branches may be over for now, and it's a good thing. Chicago suburbs recognized earlier than most the dangers posed by their irrational multiplication to healthy commercial districts. They began to zone against it when they realized that no one would want to visit a downtown full of bank branches, a district that closed at 5PM and had displaced the very businesses that would take all the money withdrawn from conveniently located ATMs.