A space shuttle has now lifted off from Kennedy Space Center 129 times. The flight of Atlantis that began on Nov. 16 is also the 31st to the International Space Station. After she returns to Earth, a space shuttle will clear the tower only 5 more times before the fleet -- Discovery, Endeavour, and Atlantis -- is retired in 2010. Atlantis is scheduled to go up only once more.

We take the technical aspects of shuttle flights for granted, even the shuttle flights themselves. But it's a remarkable technological achievement that deserves both our reflection and awe. So let me help. Here's what happened Nov. 16 close to 2:30 p.m. EST, when folks on the west coast of the U.S. were thinking about where to go for lunch. East coasters were looking forward to the end of the work day. But down at Kennedy Space Center, a now famous clock was ticking. 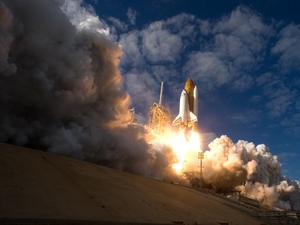 Sitting at Pad 39A before launch, the orbiter Atlantis, its external tank, and the two solid rocket boosters weighed in at a combined 4,522,383 lbs. Let's put that in familiar terms. That's 2,261 tons .... or about 1,300 cars (assuming the weight of 2010 Toyota Camry V6) ... or 30,000 average human adults. Yet only 6 adults were aboard, waiting to leave our Earth. It's something we humans have been able to do for less than 50 years. It's worth noting that well over a billion of us alive today remember a time when we could not. Pointing heavenward, Atlantis waited. At a height of 184 feet (56.1 m) it was a nearly 20-story-tall machine waiting for the clock to tick down to 0. Just 6.6 seconds before T=0 the three main engines on the orbiter ignited. At T=0 the vehicle was explosively unattached from the pad (you need to detach from the planet rather quickly), the solid rocket boosters (SRBs) ignited, and this massive, magnificent machine was set into motion .... up.

Imagine a 20 story building moving slowly down the street. Boy, that would be something to see. Imagine a 20 story building racing down the street at 60 miles an hour. Imagine a 20 story building accelerating ... up, and already traveling more than 60 miles per hour by the time it cleared the tower at Pad 39A -- only requiring it to travel less than twice its height. The space shuttle does 0 to 60 mph (0 to 100 km/hr) in 5.5 seconds, not too impressive by racetrack standards. It does beat the 6.2 seconds for the 2010 Toyota Camry V6, but did I mention the shuttle is going up, and it weighs as much as 1,300 Camrys? You've got to just step back from this and recognize what we're talking about here.

And it keeps accelerating. The two solid rocket boosters separated just 2 minutes after launch, when the vehicle was already at an altitude of about 24 miles (39 km). Just 8.5 minutes after liftoff, the shuttle was in a preliminary orbit at an altitude of 140 miles (225 km), and moving over 17,000 miles per hour (27,400 km/hr) -- that's fast enough to go from New York City to San Francisco (2570 miles; 4,140 km) in just under 7 minutes. It's fast enough to go around the entire Earth every hour and a half. In more poetic terms, it's fast enough for the astronauts to see a sunrise every 90 minutes.

As we count down the final flights of the space shuttle, I invite you to use Atlantis in orbit as a teachable moment with your kids, or if you are a teacher, with your class. Below are two posts I wrote at Blog on the Universe that ask a couple of cool questions: "How far is outer space?" and "Why are the astronauts weightless?" And if you missed it, here's the launch of Atlantis on YouTube.

The Business Trip
Essential questions: How far is 'Outer Space'? What does this imply for the thickness of Earth's atmosphere?

You Want Me to Do What With a Bathroom Scale?
Essential question: Why are astronauts weightless in space?