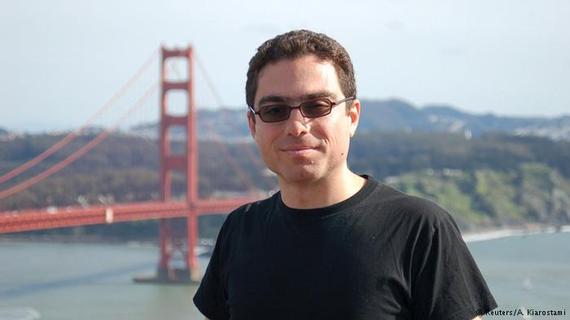 My friend, Iranian-American consultant Siamak Namazi, has been in Tehran's Evin prison for five months. His 80-year old father, Baquer Namazi - a former senior UNICEF official - was imprisoned three weeks ago. The motives behind these arrests have been lucidly explained, but news of detained Iranian Americans dies when there are no developments on the ground. It's likely that Siamak's captors know this, so I'd like to help keep his story alive by humanizing the name you see in the headlines. In a world filled with diaspora Iranians, Siamak is among the best of us. Allow me to explain.

Siamak has always been different from most dual nationals, and that's a big part of what makes him special. He returned to Iran in 1993 after living abroad for a decade. Most people in his shoes would quickly buy an exemption from their compulsory military service and proceed to live a fairly privileged life in Tehran. Not Siamak. He served in the army as a way to reconnect with the country of his birth and its people.

After finishing his graduate studies abroad, he again returned to Iran in 1999, this time as a consultant. Most people in his shoes returned to try and make a quick buck as a big fish in a small pond. Not Siamak. He helped run a world-renowned consulting firm - staffed predominantly with Iranian-born citizens - that facilitated badly-needed foreign investment from blue-chip multinational corporations.

Neither money nor power was ever a driving force behind Siamak's work. It was the indigenous development of his motherland that motivated him. Siamak wanted Iran to live up to its vast potential, and he was at the forefront of teaching international best practices and standards in business and management to scores of young Iranians. The pride on his face was always evident when his employees would move on to successful careers across a variety of fields in Iran.

After nearly a decade of giving back to his native country, Siamak made the personal decision leave Iran and cease all related work in 2007. He shifted gears to focus on energy-related business endeavors in the UAE, but make no mistake: When Siamak was working on Iran-related issues, there wasn't a better mind in the business. As my career was getting started, he was in his prime, and watching him in action was inspiring.

For those that didn't have the pleasure, you should have seen Siamak thunder away at people in the Washington DC establishment - including some of his friends - who were less than honest when talking about Iran. He was justifiably confident, and he would destroy you if your ideas were half-baked. Between 1999 and 2007, nobody - and I mean nobody - working on Iran kept it 100 like Siamak: He was intellectually honest; true to himself and the people he cared about; unapologetic but respectful at the same time; and the best at what he did.

The one exception to Siamak's departure from Iran-related work came in February 2013. As U.S. sanctions were causing medical supply shortages in Iran, he independently researched and published what became the authoritative literature on the subject. I was in the audience when he presented his findings in Washington DC. As Siamak began to describe the disastrous impact of sanctions on innocent Iranians, he choked up, paused for a moment, composed himself, and then proceeded to finish his presentation. That's how much he loves the country that is currently keeping him in prison.

It might surprise Siamak's captors to know that he actively discouraged me from getting involved in politics. After sparring over the pros and cons of such a career, I matter-of-factly told him that I truly believe in making the world a better place. He leaned back in his chair, smirked, and told me: There are plenty of ways to make the world a better place without making yourself a target in Washington and Tehran. Hardly the advice of a man who was "collaborating with enemy states" and "heading a political, economic, and cultural mafia gang."

I am one of many who are proud to call Siamak a friend. His sharp wit, intellect, kindness, and dispassionate search for truth have long been admired around the world. The U.S. and Iranian governments now have direct channels of communication, and I strongly urge the Obama administration to work tirelessly for Siamak's freedom. I have no doubt that dedicated public servants in Washington will proceed accordingly. Many of their Iranian counterparts have known Siamak for years, so they understand two fundamental truths: Siamak is a good man, and he has not committed a crime. Please release him, Iran.