As Americans struggle with the aftermath of the health care reform bill, and try to determine exactly what it means for themselves and their families, the homeless population is often ignored. Most assume that homeless Americans get free medical care, but that is not necessarily the case. Even those who do have government-sponsored health care are forced to make difficult choices when health must compete with food, shelter, and transportation. This ongoing series of stories will detail the plight of the 'sick and homeless' in Riverside, California.

"I think my blood pressure is up and mentally I'm not doing too well," says Keisha (last name not used), a thirty-something, college-educated mother who finds herself, and two of her children, living at a Riverside homeless shelter. She is waiting to see a volunteer doctor at a mobile clinic that provides medical services to shelter residents twice a month.

Keisha and her kids have been living at the shelter for about a week after getting evicted from a Moreno Valley apartment. Her husband is in Los Angeles living in a crowded apartment that belonged to his recently deceased mother. It is only a matter of days before he too will be homeless.

"This recession is destroying marriages," says Keisha, as she describes how her family's once stable existence has deteriorated within the past couple of years. Both she and her husband lost jobs, and despite working for over ten years as a Dental Assistant, she has been unable to find employment near home. Her husband moved to Los Angeles in search of work but hasn't yet found a job.

Keisha had hoped to pay their overdue rent with an expected income tax refund, but she says her IRS check was intercepted to pay for student loans in default. "That check would have bought me time," she says. Instead, she was forced to put her goods in storage and move to the temporary shelter where she is only allowed to stay for a couple of months.

It is a balmy spring evening in Riverside, devoid of the thick smog that is so rampant in the summer. Keisha believes it is the bad air in the area that causes the allergy symptoms her children display. She wants them to see the doctor to make sure they haven't developed asthma yet--as many of the children in the area do.

The air is sometimes bad, but Keisha says she was glad to move to Riverside's neighboring city of Moreno Valley, because "it reminded me of my native Alabama." Neither she nor her husband have family in the Riverside area, but they believed they could build a better life for their children in the Moreno Valley suburb rather than in Los Angeles, where they have relatives.

Keisha is waiting to enter a large RV parked outside the shelter where she and her children will see medical assistants and a doctor who are part of a program called Health-In-Motion. The program is funded by the Riverside Community Health Foundation, which provides the 38-foot mobile health vehicle that travels to several homeless shelters throughout Riverside County.

It has been a week since Keisha was evicted, and she says the stress of being homeless is almost unbearable. As she waits to see a doctor, she worries about the effects of living in the shelter on her kids, ages 7 and 9. She also misses her infant son who she says, "I couldn't bare to bring here. He is staying with my mom in Long Beach." Keisha's mother lives in a one-bedroom senior living complex which doesn't allow children, but she says, "for now, the manager is looking the other way and letting my baby stay there, but I have to find somewhere to live soon."

Riverside area roadways are congested this time of evening, with residents returning from work, many from far away Orange and Los Angeles Counties. Jobs were never plentiful in Riverside - for many it is a bedroom community. People moved to the area and were willing to make the trade-off of a long commute for less expensive housing. The recession has wreaked havoc on the area and the many new housing tracts that have sprung up the past decade. Foreclosure rates are high, and unemployment has hovered near 15% for most of the year.

"Most of our residents have lost a job and in this economy their chances of finding employment are slim," says shelter director Damien O'Farrell. Like others who work with the homeless, O'Farrell speaks of the 'new poor,' families that had previously led a middle-class existence - including jobs, cars, homes, and employer-sponsored health care. He says that many shelter residents don't take the time to visit a doctor because they are busy trying to secure employment and housing.

Some shelter residents have cars that they park on nearby streets, but most depend on public transportation. Keisha says it can take her all day to get to and from Long Beach by bus, so she worries that she won't get to see her baby often while she is in the shelter. She also worries about the stress on her older kids who are still in their Moreno Valley school. "At first I didn't want to tell their teachers we are living in a shelter," she says. "But the kids started falling asleep in class because they do not sleep well here. They have always been good students and their grades started to drop."

Keisha expresses remorse at her situation and says she tries to stay strong for her kids but doesn't know how long she can "keep it together." As she sits in the waiting room she agrees to a photo to accompany this story. She flashes a beautiful smile. 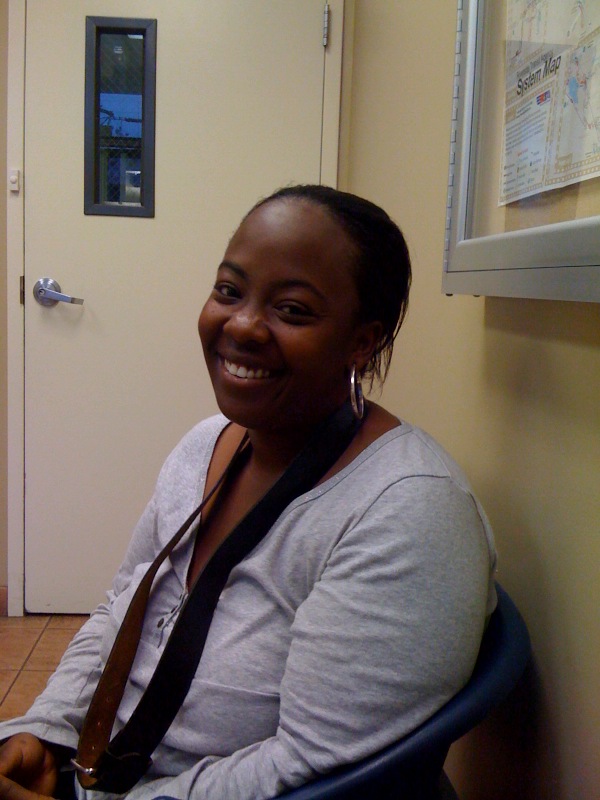 "What else do I have to give?" she asks.

This on-going series of stories on Riverside's 'sick & homeless' are part of the California Endowment Health Journalism Fellowships, a program of the University of Southern California's Annenberg School for Communication and Journalism.