A majority of Americans think employers should be required to pay for sick leave and time off for new parents, according to a HuffPost/YouGov poll.

About 40 percent of private-sector workers, many in lower-wage industries, aren't guaranteed paid sick days, according to the Bureau of Labor Statistics. President Barack Obama has urged employers to offer the benefits voluntarily and has asked Congress and state legislatures to pass legislation requiring paid leave.

Lawmakers' opinions on the benefits diverge largely on partisan lines. Americans in general, however, are more supportive.

The poll found a majority of Republicans and Democrats support requiring paid sick leave, although Democrats are 31 percentage points more likely to do so. There were similar partisan gaps on maternity leave and paternity leave. 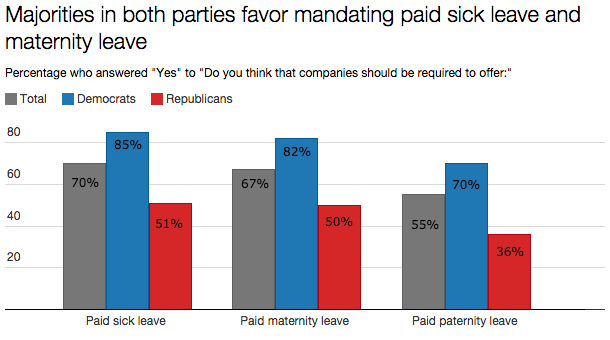 The divide in opinion on sick leave and maternity leave has remained relatively unchanged since HuffPost last asked about the issue in June 2013. Paternity leave, however, has gained some currency, with support now 8 percentage points higher than it was in the earlier poll.

The HuffPost/YouGov poll consisted of 1,000 completed interviews conducted Jan. 31 to Feb. 2 among U.S. adults using a sample selected from YouGov's opt-in online panel to match the demographics and other characteristics of the adult U.S. population.

The Invisible Pain Of Endometriosis

9 Secrets Of A Happy Workplace