Sick overreactions to Islamic terrorism are becoming archetypical. The first overreaction advocates pitiless counterism (a term designed to be broader than counter-terrorism). The second overreaction is the looming mistreatment of Muslim diaspora. The third overreaction maligns the faith of Islam. I will argue below that these overreactions foster lawlessness, fail to prevent terrorism, and inject poison into relations with the Muslim world. Let me clarify Islamic terrorism, a tag whose appropriateness, for good reasons, has been questioned in academic literature. I use Islamic terrorism to mean acts of violence perpetrated by Muslims. For example, the recent Paris attacks (11/13/15) constitute Islamic terrorism since they were allegedly committed by Muslims. That the suspects belong to a militant organization, such as the ISIS, adds fervor to calling it Islamic terrorism. That the perpetrators are Sunni, Shia, Wahabi, or even non-practicing Muslims, though noteworthy, matters little in the politics of tagging. Many nations, including Muslim nations allied with the West such as Pakistan, Saudi Arabia, and Turkey suffer terrorist violence. Muslim nations do not brand such violence as Islamic terrorism. Islam and terrorism are correlated only when violence is committed against Western targets or unleashed inside a Western nation, such as the attacks in France.

Hours after the Paris attack, the fiery rhetoric emitted in France was reckless. President Francoise Hollande promised a "pitiless" counter-offensive. Within a day, France launched massive airstrikes against the ISIS targets in Syria and Iraq. It is unclear who was killed in these strikes. Facts are the first casualty of pitiless counterism. Pitiless counterism is a term I use to denote lawless invasions, massive bombardments, extreme tolerance for collateral damage (killing of civilians), unlawful detentions, secret prisons, and infliction of torture. In law, pitiless counterism means utter disregard of international humanitarian law, human rights obligations, and constitutional restraints on the use of force.

The French pitilessness was imitation art of the 9/11 counterism. Recall that after 9/11 attacks, the U.S. atmosphere was filled with putrid verbosity of causing "shock and awe" through the use of force. President Bush uttered a thrilling aphorism "you're either with us, or against us," as if reality is binary. Motivated by pitiless counterism, Afghanistan was invaded and the Taliban government was overthrown. Cab drivers, teachers, and other innocent bystanders were detained and sent to Guantanamo. Detainees were tortured in open and secret prisons. Not satiated with pitiless harm done to Afghanistan, a war still unfinished, Bush invaded Iraq, killing hundreds of thousands of civilians.

A leaf from history demonstrates that pitiless counterism is not new to France. In 1830, France invaded Algeria, using "scorched-earth tactics, destroying animals and crops and massacring villagers." Algeria was invaded to avenge the honor of the French people because the Dey (ruler) of Algiers hit the French ambassador with a hand fan and refused to apologize. The merciless invasion was a blatant mockery of the French ideals formulated in the 1789 Declaration of the Rights of Man, which states: "The goal of any political association is the conservation of the natural and imprescriptible rights of man. These rights are liberty, property, safety and resistance against oppression." What France did in Algeria would now easily qualify as war crimes and crimes against humanity. Forgetting its brutal colonial history, France fantasizes itself as a holier-than-thou nation, as light of liberty. 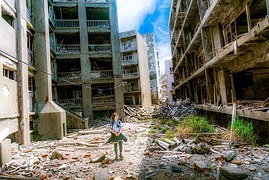 French delusions aside, pitiless counterism is a stupid doctrine. If an insane person attacks a town, the answer is not for the entire town to become insane. If one hundred persons are killed, the remedy is not to kill a hundred thousand people. If a building is razed, the solution is not to erase an entire village. Firing bullets to alleviate pain is quack medicine. Sometimes, absorbing pain is indispensable for restoring wellbeing. Sometimes, even a proportionate counterforce is counterproductive. Wisdom has rarely been the forte of the war-addicted West.

Tied to pitiless counterism is the Sword of Damocles permanently hanging over Muslims living in the West. Whenever a terror attack occurs in a Western nation, Muslim communities are placed under instant surveillance. "Suspect houses" are raided. "Suspect persons" are detained. Muslim men are profiled. Muslim women are harassed. Mosques are infiltrated. Even Muslim doctors, engineers, lawyers, accountants, mothers at home, and Muslim children in school feel the pressure of omnipresent culpability. Despite ballyhooing individual rights and responsibilities, the Western mindset cannot cast off the notions of shared guilt and collective punishment. France must not forget that Algerians, Tunisians, and Moroccans are French Muslims. They must be respected as full French citizens even if a few individuals among them perpetrate acts of violence. If the white-skinned France is unable to do so, then France should repeal Article 1 of its constitution, which states: "France shall ensure the equality of all citizens before the law, without distinction of origin, race or religion. It shall respect all beliefs." France should also un-sign the European Convention on Human rights and the International Covenant on Civil and Political Rights, both of which mandate in identical language that "No one shall be subjected to torture or to inhuman or degrading treatment or punishment." France will breach international obligations, and spoil its own fantasies, if French Muslims are degraded and their religion is trashed by French officials and French media.

The third overreaction comes in the form of maligning Islam, a menacing chorus of ugly voices. Western politicians, journalists, and terrorism experts begin to attack Islam, even if perpetrators are non-practicing Muslims. In January 2015, in response to Charlie Hebdo attacks, Prime Minister Manual Valls delivered a passionate speech declaring that France is "at war with radical Islam." Abraham Foxman, the national director of Anti-Defamation League, admires Valls for "calling it what it is." Foxman goads Western leaders to shun political correctness and boldly employ the phrase "radical Islam" if "we want to win the war." Some cohorts invoke genocidal ideologies, minted and practiced in the West, such as Fascism and Nazism, to build correlations with Islam, the faith of more than a billion people of all races living in all continents. "Calling it what it is" is treacherous teaching. Who decides what Islam or for that matter any religion is? Louis Farrakhan calls Judaism a "gutter religion." Nietzsche branded Christianity as a religion of pathological pity. Nazis refused to accept Judaism as a religion, instead calling it a race. One sure way to defeat counter-terrorism and alienate, if not radicalize, Muslim communities is to tell them that Islam cultivates addiction to violence - a theory espoused in terrorism literature.

By all counts, the three overreactions discussed above are mendacious. Two eyes for one eye and all teeth for one tooth is the manual of sick minds. The human species cannot be surrendered to vengeful masters of any race, religion, or national anthem. We need no fiends to show us the way.