A Subway worker in Freeport, Texas, claims she was forced to continue working her shift while suffering from a stomach bug, then was fired the same day.

Elizabeth Taff, 24, says she was so sick she could barely stand up straight and vomited several times during her shift on July 11, but her manager refused to let her leave unless she found someone to cover her shift.

"About 40 minutes into my shift I felt nauseous. My mouth started watering, and I knew I was about to vomit. I ran into the restroom and vomited repeatedly," Taff told The Huffington Post. "I went and let my manager know, [but] she told me to find my own replacement after lunch rush."

Taff says she then summoned enough strength to get through the lunch rush, hoping to track down another employee to fill in for her. But no one else was available, she said.

She noticed vomit on her work clothes and, rather than take a pay cut for a new work shirt, phoned home for someone to bring her a clean outfit, she said. She also maintains she didn't leave work for fear of getting fired and losing her paycheck.

This is a common dilemma facing many hourly wage workers. Because paid sick leave largely doesn't exist in the food service industry, workers may risk their health and the health of customers by coming in to work when they should be staying home. A 2011 survey conducted in part by the Centers for Disease Control and Prevention revealed almost 12 percent of 500 food workers had come in to work while suffering vomiting or diarrhea on two or more shifts in the previous year.

Speaking to local news outlet KPRC, Taff expressed concern for the impact her sickness could have had on customers.

"I was touching everybody’s sandwiches," she said. "I’m like, ‘This ain’t right.’ I had gloves on but that doesn’t matter."

Ultimately, though, she was fired that day. Subway asserts the decision was due to her "poor performance and insubordination," reports KPRC.

"I was on my knees [on the grass outside the restaurant], while [the manager] berated me with remarks such as 'you're so stupid, if you cant handle working while feeling ill you don't need to work here, all you had to do was switch shirts and finish your shift,'" Taff told HuffPost. "She told me I was fired since I was unable to talk, due to vomiting all over the place."

Employees from a nearby business rushed to Taff's aid when they saw her reeling on the ground behind the fast-food restaurant. Taff said she eventually passed out, and one of the employees who came to her side called an ambulance. 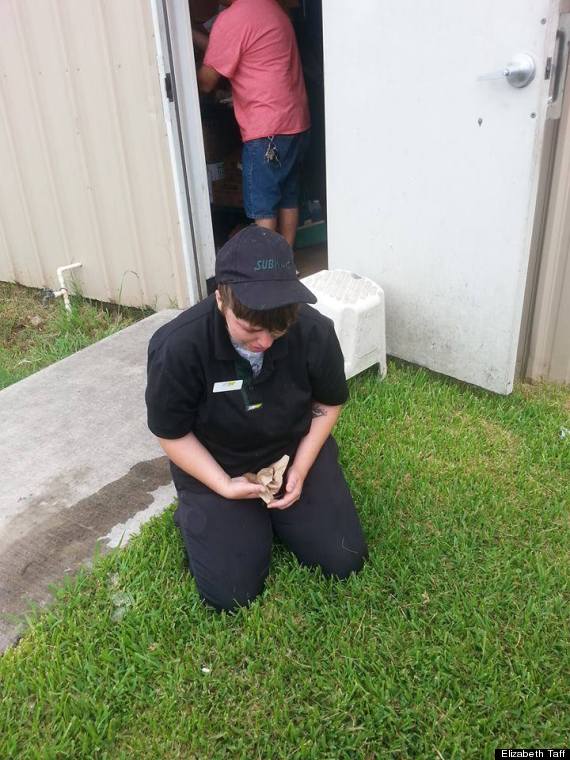 Employees from a nearby business came to Taff's side.

"When the [ambulance] arrived, they [the emergency medical technicians] were livid and wanted to know why [my boss] had kept me there for so long," Taff told HuffPost.

Later, one of the employees who had attended to her took to Facebook to post a photo of Taff lying on her side in the grass behind the restaurant. The photo's caption reads:

If you planned on eatin Freeport Subway today i'd advice you not to. I witnessed an employee vomiting and her manager tellin her just to switch shirts..after calling ems it was discovered she had been breathing and serving food with a stomach bug that is contagious!!!!! Then they had the nerve to fire her for calling the ambulance after shaking and passing out!! Sad part she didn't call them, we did [all sic].

According to the Food and Drug Administration's Food Code, the person in charge of a food establishment shall "exclude or restrict a food employee from a food establishment" if they exhibit symptoms including vomiting or diarrhea. Taff's story highlights a kink in the fast-food chain's enforcement of proper food handling safety and adds to a growing list of labor violations against the company. Between 2000 and 2013, the franchise was found to have committed 17,000 Fair Labor Standards Act violations, resulting in a $3.8 million payout to workers, CNN Money reports.

Taff says she hopes her story will fuel change in workplace standards.

"I'm hoping what comes of this whole situation is a new law or better training on workplace etiquette," she told HuffPost.

UPDATE: 4:30 p.m. -- Subway forwarded The Huffington Post a statement from the Freeport franchisee, Dinesh Agrawa, who said that Taff's "allegations are not true."

A rep for Subway also commented on the situation:

The Freeport franchisee, who owns and operates his locations independently, as do all franchisees in our system, worked with his store management team to review all of the circumstances surrounding staffing matters and ensured us that all employee relations protocols were followed.