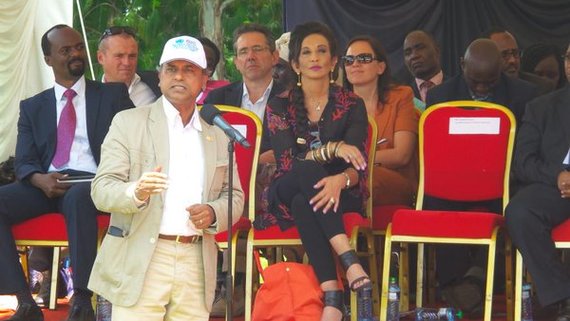 Major Siddharth Chatterjee, Sena Medal (Retd) served under my command in Sri Lanka from 1987 to 1990, has recently been appointed as the United Nations Resident Coordinator to Kenya.

Major Chatterjee was a decorated and highly valued member of my team, who served with honour, distinction and epitomized the credo of the Indian Army, "service before self".

A blogger of questionable credentials, poor ethics and a filthy office, who runs a blog out of the United Nations in New York, has hurled scurrilous, unfounded and mendacious accusations of human rights violations against Chatterjee. Major Chatterjee was a star member of my battalion, the 10th Para Special Forces, and at no time was my battalion or any member of my unit ever involved in any form of human rights violation.

I state this unequivocally.

My battalion was part of the Indian Peace Keeping Force that was invited to Sri Lanka by the Government of Sri Lanka to uphold the Indo-Sri Lanka Peace Accord signed between our late Prime Minister Rajiv Gandhi and the late President of Sri Lanka J. R. Jayawardene in 1987.

My battalion took tremendous losses of dead and wounded officers and men to ensure the peace in Sri Lanka, a difficult task we had to wage with "one arm tied behind our backs".

Major Chatterjee's qualities as a soldier are beyond reproach and was an example of an officer and a gentleman.

To attack the UN Secretary-General Ban Ki-moon who happens to be Chatterjee's father-in-law, using his service in Sri Lanka is not only absurd but deserves to be condemned in the strongest possible terms.

I am appalled at the impunity and utter disregard the blogger has demonstrated to malign reputations. This is yellow journalism and clearly there seem to be no editorial checks. Fellow journalists at the UN Correspondent Association have complained about his "bullying behavior online".

It is important to be reminded that Major Chatterjee joined the United Nations system in January 1997, 10 years before Ban was elected for the position of Secretary General. His quick rise in the UN from 1997 to 2004 from an International Field Service Officer of Limited Duration, level 4 to a professional level P-5 by 2004, is a testimony of his professionalism, an ability to adapt and serve in adverse conditions and deliver results. Ban was not around as the UN Secretary-General then.

I would encourage the blogger to publish my article in full in his blog site too.

I and every retired and serving member of my battalion are proud of Major Chatterjee's many achievements and wish him, "God Speed and Happy Landings" in his new role as the UN's leader in Kenya.

A retired General and a decorated Indian Army veteran who stands up for justice and fairness.