It's no secret theatre districts act as important economic engines in urban areas. Although many theatres have been built in reasonable proximity to concert halls and mass transit lines, grouping auditoriums together as part of an architectural concept started nearly 100 years ago. 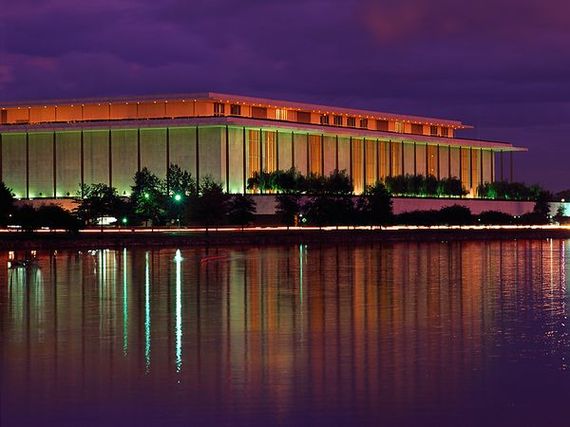 The John F. Kennedy Center for the Performing Arts 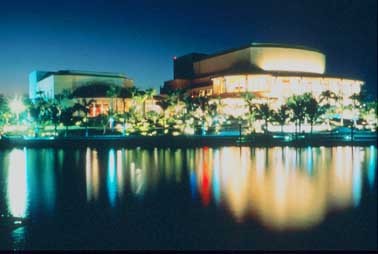 The Broward Center for the Performing Arts in Fort Lauderdale 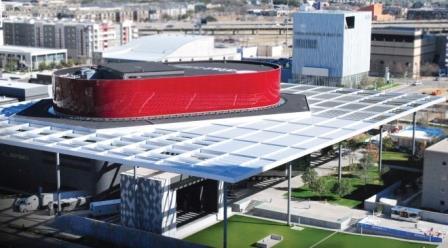 But what about theatres that have become geographic neighbors without being part of a major architectural concept? On one block near Union Square, the Geary Theater plays host to the American Conservatory Theater while the Curran Theatre is currently undergoing renovations. On one block in downtown Berkeley, the Aurora Theatre Company resides close to the Berkeley Repertory Theatre's two auditoriums, the 600-seat proscenium-style Roda Theatre and the 400-seat Thrust Stage (which is currently undergoing renovations). 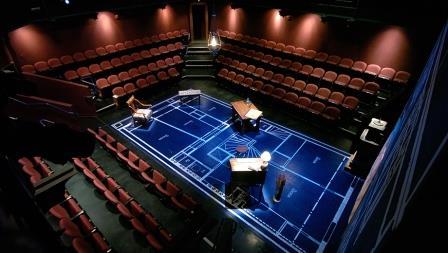 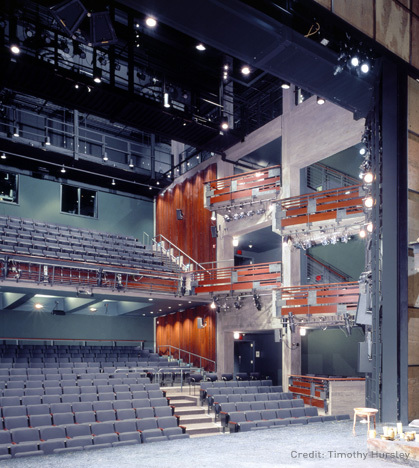 I recently attended back-to-back performances of the season's opening productions for both the Aurora Theatre Company and the Berkeley Repertory Theatre. Each show focused on the trials and tribulations of some severely confused women. Some were wistful and wondrous, others were bone tired and laden down with lots of emotional baggage.

The Aurora Theatre Company launched its 2015-2016 season with the Bay area premiere of Marisa Wegrzyn's poignant Mud Blue Sky, a contemporary comedy which takes in the parking lot as well as one of the cookie-cutter rooms in a chain hotel close by Chicago's O'Hare International Airport. From the moment the exhausted Beth (Jamie Jones) enters her darkened hotel room dressed in her flight attendant's uniform and begins the painful process of taking off her shoes, turning on the lights and recoiling from a disgustingly sticky remote control, the audience understands that this is one tired, burned-out airline employee. 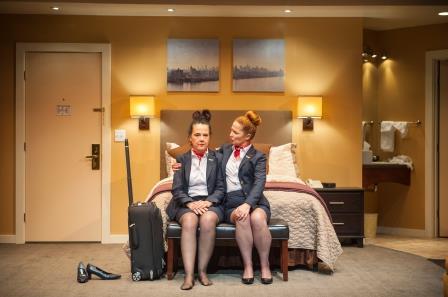 There is little chance of Beth getting any peace and quiet because her excited co-worker, Sam (Rebecca Dines), is eager to change out of her uniform and head out to a party at one of their favorite bars. Sam has also agreed to meet up with their former colleague, Angie (Laura Jane Bailey), who left her career in the sky to get a divorce and take care of her ailing mother. In the process, Angie put on a substantial amount of weight and learned that it's possible to have a decent life that is more than a series of lift-offs and landings. 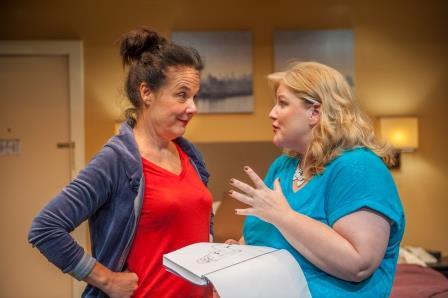 There's just one problem. Beth (who lives in St. Louis) has an appointment to meet her drug dealer in the parking lot. The 18-year-old Jonathan (Devin S. O'Brien) is dutifully waiting for her, clad in a tuxedo after his prom date dumped him so she could hang out with her friends. Although Jonathan is suffering through an advanced stage of teen gawkiness, he certainly knows how to roll a joint. He's also an extremely talented sketch artist. 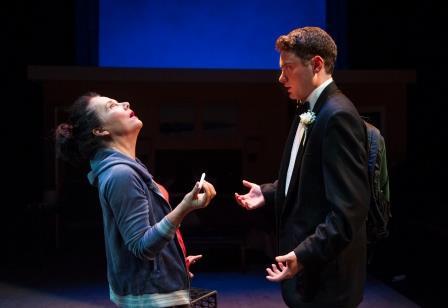 While the flight attendants are forced to be sweet and smiling during their working hours, things change once they're no longer cruising at 30,000 feet. 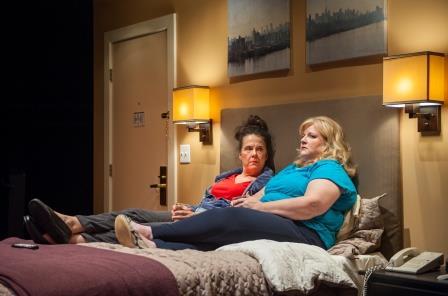 When Sam and Angie discover Beth's secret (that Jonathan is her source for weed), they become acutely interested in his potential. 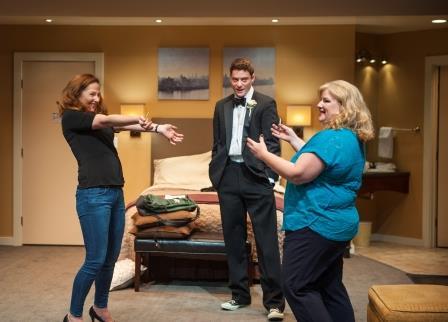 When Jonathan gets a call from his girlfriend who's bored and wants to know if he'd like to get back together for the rest of the evening, all three women get very protective of their new friend. Although Angie (the only one who lives near Chicago) may have found herself a new source, it is Beth who may end up having the most fruitful future with Jonathan. Why? With his talent as a graphic designer, he's offered to design the labels for her new microbrewery once she retires from flying. 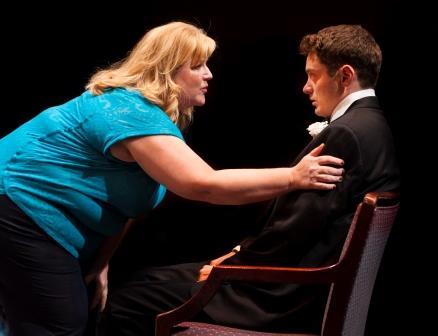 Aurora's production of Mud Blue Sky was sensitively directed by Tom Ross on a unit set by Kate Boyd that nicely mimics the decor of a hotel chain's guest rooms. Special credit goes to Chris Houston for his sound design of planes taking off on a flight path which passes right above the hotel.

Wegrzyn (whose mother was a flight attendant) certainly knows the territory she is writing about. And yet, with three severely-conflicted women and one likable but confused young man, it's surprising that Mud Blue Sky feels like such a slight play. While all three women are strong actresses, I was stunned to see the gangly young Devin S. O'Brien (Jonathan) walk off with the show. Jamie Jones is one of the Bay area's most formidable actresses and to see a young actor match her step for step signals a talent to watch.

The Berkeley Repertory Theatre opened its 2015-2016 season with the world premiere of a new musical entitled Amélie (which is based on the 2001 film by the same name). Directed by Pam MacKinnon (with a book by Craig Lucas, musical direction by Kimberly Grigsby and musical staging and choreography by Sam Pinkleton), the show is most notable for its fluidity.

There's no doubt that David Zinn (scenic and costume designer), Jane Cox (lighting designer), Kai Harada (sound designer) and Peter Nigrini (projection designer) have created a delicious world of whimsy in which a young Parisian lass (Savvy Crawford as Young Amélie and Samantha Barks as the adult Amélie Poulain) can live out her fantasies. Nor is there any doubt that Daniel Messé's score and vocal arrangements (with lyrics by Nathan Tysen and Messé and orchestrations by Bruce Coughlin) have a strong lyrical appeal. As Tysen notes:

Our biggest discovery was just how much music the show required. At the beginning of our process, we only musicalized Amélie's fantasies, but soon learned the story was more effectively told when sung. This process has definitely been one of trial and error as we have thrown out just as many songs as are currently in the show. I knew it couldn't sound like the movie score. This is definitely an American take on a French film so, very early on Dan announced "No accordions!' Fortunately, Dan's music has a folksy, whimsical vibe that easily lent itself to Amélie's world. 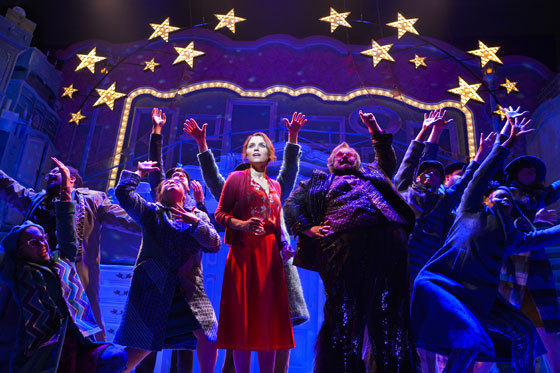 Samantha Barks with the cast of Amélie (Photo by: Kevin Berne)

Berkeley Rep's production (which whirls around the stage of the Roda Theatre with the greatest of ease) is obviously a labor of young love as well as professional love. Prominent members of the cast include: 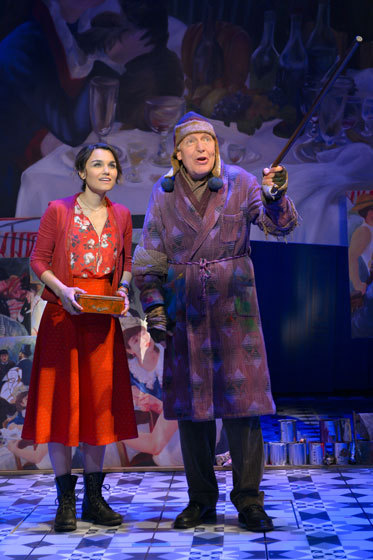 Samantha Barks (Amélie) and Tony Sheldon (Dufayel)
in a scene from Amélie (Photo by: Kevin Berne) 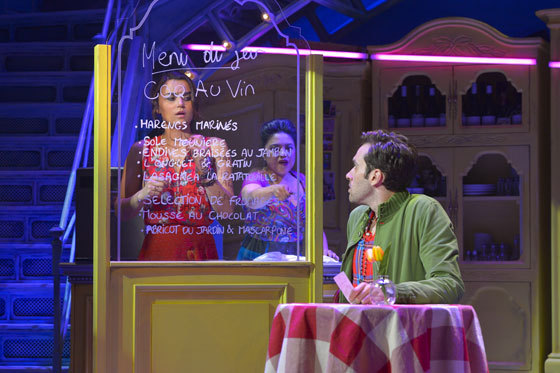 Samantha Barks, Maria-Christian Oliveras and Adam Chanler-Berat
in a scene from Amélie (Photo by: Kevin Berne) 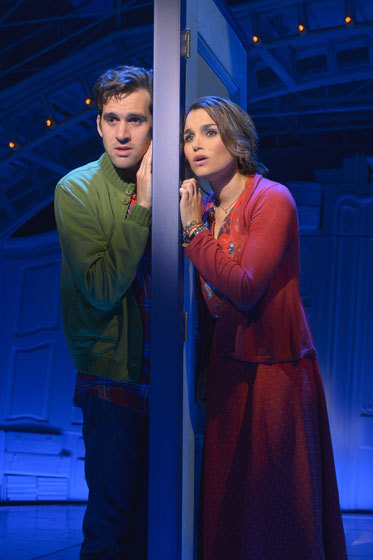 Adam Chanler-Berat and Samantha Barks in a
scene from Amélie (Photo by: Kevin Berne)

It's rare to encounter a fantasy in which a young girl filled with mischief and whimsy is forced to mature into a young lover, perhaps unsure of taking risks but realizing that if she fails to communicate with the man who fascinates her, nothing much will ever happen. And yet, to my utter surprise, I found myself far more interested in Adam Chanler-Berat's beautifully-sung portrayal of Nino (which exuded more depth, mystery and passion than anyone else onstage) than in Ms. Barks.

While there is lots of buzz about Amélie moving to Broadway in the Spring of 2016, this show is still very much in the tryout phase. The basic elements are in place although, on opening night, there seemed to be a great sameness to much of Messé's (mostly charming) score. My guess is that, during its Berkeley tryout, new songs may be added which will strengthen the moments of dramatic conflict. Here's the trailer: