At the end of Sutra the musicians, who've been visible through a gauze screen at the back of the stage of the Sydney Opera House's Concert Hall, playing the melancholy uneastern music of Polish Composer Szyman Brzoska on strings and percussion and piano, walk onstage in suits and little black cocktail dresses to take a bow. They stand in front of the Chinese Shaolin monks and their raw plywood boxes. Off to one side is Sidi Larbi Cherkaoui with his aluminium box that artist and box creator Antony Gormley wasn't certain about at first: "It reads like the box a magician might have, or a cryogenics experiment. If you were going to be deep frozen for the next 500 years, you might have a box like this." The worlds within worlds that's the hallmark of Cherkaoui's pieces. 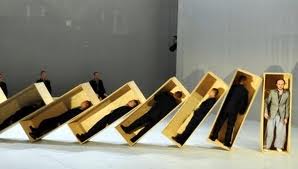 Sutra was a remarkable experience for me and exactly what its title suggests -- a set of spiritual lessons, advice for living. Collections of sutras have no plot or narrative, but Sutra's sutra illustrates Sidi Larbi Cherkaoui's story of spending several months with the Shaolin monks in their monastery near Dengfeng City in China's Henan Province, founded in 495 AD. Onstage, he's with a child monk and they're putting models of the human-sized wooden boxes into formations that suggest sutras that the adult monks, with their lifesize boxes, will be shown to be embodying in their lives. The adult monks will draw Cherkaoui, who has the antic grace of a silent movie comedian, and his aluminium box into their world, but he's often at the edges, boxbound, trying to find a way in.

"The monks have a wonderful freedom of spirit," Gormley told The Independent. "They're as interested in hip-hop and contemporary culture as they are in the Buddhist sutras. One of the warrior monks told me that he was there solely to learn kung fu. "I'm not interested in Buddhist philosophy," he said. But through the physical discipline, he is getting it anyway -- no theory, all practice."

The aluminium box made me think of Antony Gormley's sculpture of a man made from metal blocks at the Art Gallery of NSW. It always makes me think of someone who is living a manufactured life, going through the motions of living, as if he were a machine. Gormley visited the Shaolin monastery and the small living areas of the monks, as well as dwellings of factory workers that he saw there, reminded him of shelving, or coffins. Shelving and coffins are just two of the myriad ways the monks use their boxes during Sutra. 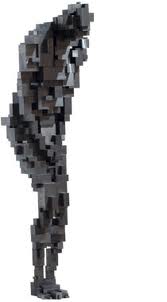 A few months ago, there was a debate on Twitter among Australian arts organisations, on whether tweeting during shows expands upon or detracts from the experience. The broader question was, "what's our level of immersion in a show now?" Do we consider a show a complete, closed world, and entirely enter into it? Or is a show a more complex reality now, a zone of engagement that acknowledges the outside world and allows the audience to bring it inside?

I think of Sidi Larbi Cherkaoui and Akram Khan's dance pieces, the music of Nitin Sawhney, and the artworks of Antony Gormley as a single universe, reflecting Eastern mythologies from their Western lives back to the East. They are Belgian/ Flemish / Moroccan, British / Bangaldeshi, British / Indian, and British but lived in India. Some of their works relate to the Islamic experience in Europe. Sawhney has provided soundtracks for a dance piece for the Hindu spiritual work, The Mahabharata, and an Indian silent movie based on The Bhaghavad Gita -- a fragment of The Mahabharata. At the beginning of his career, Akram Khan appeared in Peter Brook's staging of The Mahabharata. They create works around other topics, with different subjects, but these Eastern works of theirs have become a reference point for me.

I find that their shows both widen and sharpen my experience of Eastern mythologies even when I only read about them, or experience fragments of them, such as the soundtracks, or previews on YouTube. My own introduction to Eastern mythology was through seeing the movie of Peter Brook's Mahabharata, and hearing the Gyuto Monks of Tibet and Phillip Glass perform together at the Cathedral of St. John the Divine in New York. Both experiences were magnificently unsettling, and I found myself gradually reading and seeking out more about Buddhist and Hindu mythology. I felt at home in these stories, and at home in India in when I visited.

Sutra completely engaged my attention, but as I was walking down the concrete steps outside the Concert hall I was also thinking about how I wanted to re-read Richard Bernstein's Ultimate Journey: Retracing the Path of an Ancient Buddhist Monk Who Crossed Asia in Search of Enlightenment, published in 2001. He was the Time Magazine China bureau chief who traced a pilgrimage that the Chinese monk Hsuan Tsang made in 629 A.D. to Buddhist sites in India. Mishra lived in the areas the person the Buddha may have lived in, and traced the growing significance of Buddhism in the world, even though it had effectively died out in India. Mishra had discovered Buddhism through western writers, Nietzsche, Herman Hesse's Siddharta. "I wasn't making any high claims for the Buddha or Buddhism," he told Believer Magazine. "The book was an attempt to think about the world we live in and to think [about] it through Buddhist ideas, not an attempt to persuade or convert anyone that my life is interesting and dramatic enough to read about."

"My work has always been a bit of a search for a moral code -- trying to find the right behaviour to have," Cherkaoui told londondance.com. "In a sense I'm very zen -- but at the same time I'm very not. A Japanese producer friend Hisashi Itoh asked me, 'what are the things you love', and I was talking about yoga, singing and about martial arts. He had a contact with the monks of the Shaolin Temple and he offered to introduce me. My first intention was just to go there to meet them, not to work with them. I went in May last year and I had an incredible experience. It was only for five days. But I really felt suddenly home: I felt home."