In a scene right out of a Frank Capra movie, the Sidney N.Y. Town Board fled its monthly town meeting after an overflow crowd began chanting "McCarthy must go! McCarthy must go!"

The ruckus exploded after Sidney Town Supervisor Bob McCarthy refused to apologize to a local Sufi Muslim community, Osmanlı Nakş-ı'bendi Hakkani Dergahı, for claiming it broke unknown laws when it buried two of their own on their property, for wanting to force them to dig up the bodies -- and for making the town an international joke.

The meeting was the climax of events dating from July, when Mr. McCarthy asked Town Attorney Joseph Ermeti how to stop further burials on the Dergah's cemetery.

Step by step, Mr. McCarthy turned a tussle about bigotry and Islamophobia into a morality play--a morality play about a rural town of fair-minded Americans that elects, then turns against, a man on a horse who promised to turn around its declining fortunes--only to earn a reputation as a small-minded bully with no respect for the law, or the people he serves.

At the meeting the Sufis' spokesman, Hans Hass, calmly exploded Mr. McCarthy's claims about what happened one by one, and then asked point-blank if he'd apologize. Mr. McCarthy said "No." That answer turned the mood of the overflow crowd from restive to surly, and Mr. McCarthy and the board soon left.

Mr. McCarthy's earlier response to claims he'd caused the mess, and to demands for an apology? "Whatever."

Mr. McCarthy probably wanted to leave it all behind him when he closed the meeting and followed the Board out of the room. Instead, the door he walked through opens on the next chapter of what promises to be a long struggle to drive him from office.

"He's certainly done some things that are out-and-out illegal," says Dawn Rivers Baker, first vice chair of the Delaware County Democratic Committee. "This Sufi thing is small change next to those things. They may seem small, but they add up." Ms. Baker ran for Town Supervisor against Mr. McCarthy last November.

The day after the town meeting, there were serious local discussions about moving in state court to dismiss Mr. McCarthy, possibly under the state's Public Officers law, according to Mr. Schimmerling, who's representing the Sufi community pro bono.

The Sufi issue itself is in fact more or less over. The day before the meeting Town Attorney Joseph Ermeti sent the Sufi's lawyer, Thomas Schimmerling, a fax saying that the Town plans to take no action on the matter.

Before that, Mr. Ermeti had circulated a letter to Delaware County officials claiming that the Sufi cemetery violated a provision of the state cemetery law, an assertion that Mr. Schimmerling, in a letter in response sent to Mr. McCarthy, pointed out doesn't apply to religious cemeteries.

In the same letter, Mr. Schimmerling threatened to sue the Town, and each Town officer, under Federal civil rights law. This would have inflated the towns legal fees in the matter by a factor of 100. The original budget for it? Three thousand dollars. That in turn raised fears in the town that Mr. McCarthy, who'd campaigned on promises of lower taxes, would in fact wind up raising them to pay for legal fees he creates.

The Sufis' spokesman, Mr. Hass, says his group still needs to be told clearly that the cemetery is legal, and still wants an apology. So does the Council of American-Islamic Relations. But as things stand, the Town has obviously backed down in hopes the matter will blow over, and any danger of action against the Dergah when they conduct their next burial is remote.

In truth, the cemetery on the Dergah's land is perfectly legal. It took Town Attorney Joseph Ermeti four months to discover there are no laws in New York or Sidney governing religious cemeteries on private property, time that allowed pressures in the town over the issue to boil over.

Mr. McCarthy does have his supporters, including Robert Hunt, Republican leader of Sidney, Steve Anderson, the local Tea Party leader, and some town citizens who spoke up at the meeting.

But Mr. McCarthy's behavior has turned the people of Sidney and of surrounding Delaware County almost solidly against him, and the support he has is dwarfed by opposition most local citizens say was created by Mr. McCarthy himself. Those turned against him include: 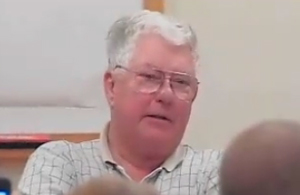 A letter from the Board, read at the meeting by Town Clerk Lisa French, said in part that while he's accomplished some positive things since he took office, Mr. McCarthy has to "...work on his people skills...." And interviews with waitresses, librarians, and town and village officials were unanimously against Mr. McCarthy personally, and for making Sidney an international laughing stock.

Among the things that may weigh against Mr. McCarthy:

Many in the area think Mr. McCarthy's performance in this scandal has made clear that Mr. McCarthy either doesn't understand the limits of his powers, or doesn't care.

For example, Mr. McCarthy has never had any legal power to stop further burials in the Dergah's cemetery, and certainly none to force the Sufis to dig up the graves; the cemetery had been approved by the town in 2005, the Dergah had valid permits for each burial, and Article 9 of the U.S. Constitution forbids so-called ex post facto laws.

That provision, forbidding laws created after an event that make said event illegal, means the best he could have hoped for would have been to forbid future cemeteries on private property -- a step the town did in fact take at the meeting, when it proposed the first Town Law of the year, covering exactly that subject.

Observers likewise say that Mr. McCarthy's management during this imbroglio has been, at best, remarkably ham-handed -- even naive.

For instance, he got up at the recent County Republican dinner, claimed the Town Meeting minutes for August -- which authorized Mr. Ermeti to act legally against the Sufis -- were false, and read what he claimed were the real minutes -- a document that conveniently made everything go away. Unexplained was why the Board, including Mr. McCarthy, approved the official August minutes in the first place if they were false. Calls to Messers McCarthy and Ermeti requesting comment were not returned.