When Café Gratitude opened in 2004, Matthew and Terces Engelhart claimed their vegan restaurant would follow the principles of "sacred commerce" and "honest and transparent communication." That's probably why the couple felt comfortable sharing their decision to slaughter and prepare their own meat products - after 40 years of vegetarianism - in a February 2015 blog post.

"While I would clearly say we are in transition and that transition is happening deep within our beings, we know it is a necessary and important part of our own growth as well as the sustainability of our farm," wrote Terces.

In March, Terces shared a photo of her husband eating his first burger in 40 years. The decision to return to meat was based on a belief in holistic non-violence, Matthew explained. It was also a matter of religion.

"Perhaps I've failed to explain adequately why I would pursue the path of eating flesh after 40 years of vegetarianism," Terces wrote for her husband. "The answer is non-violence but non-violence to the whole system, all species. [...] Grasslands need herds of ruminants to thrive, when they are removed, the grasslands degenerate into desert. Desertification is violence against all species including humans."

Therefore, concluded Matthew, "We need cows to keep the earth [sic] alive, cows make an extreme sacrifice for humanity but that is their position in God's plan as food for the predators. Cows maintain the grass, predators maintain the herd by culling the weak and sick. We can be part of that sacrament. As in the passion of Christ, we all have to spill our blood for humanity to know the Father [emphasis added]. The cow's sacrifice was [sic] been ordained, ours we must choose."

Devotees of Café Gratitude considered this carnivorism a gross betrayal of the restaurant's philosophy. When ordering from the restaurant's menu, customers are required to state what they are, not what they want; "I am glorious" means "I want a caesar salad;" "I am warm-hearted" means "feed me braised summer squash." How could customers go on being glorious and warm-hearted when the gurus of Gratitude were bloodying their hands?

The backlash was not immediate. It was not until green activist and vegan Leilani Münter tweeted the news to her 25,000 followers - a year and two months after Terces' initial post - that the Engelharts were engulfed in a shitstorm of titanic proportions.

"[A]m I happy that folks are making the big bucks off of all the wonderful things that vegans enjoy, as we strive to live compassionately, and then they turn around and use that money to buy animals to kill? No."

Other vegans have been more direct in their criticism. According to the Hollywood Reporter, the Engelharts received death threats.

But why? Have vegans become less vegan for patronizing it? Were the Atlanta Falcons complicit in dogfighting when Michael Vick went to prison? Is every Dell customer just waiting to snag a Manhattan dime bag à la Slacker Steve?

Vegans looking to make a statement can still go to Moby's Little Pine Restaurant in Silver Lake. The musician has been very clear on his stance against animal exploitation.

But as for the Engelharts, did they really betray their philosophy? It depends on whether or not you believe the philosophers.

What the Hell Is a Chief Inspiration Officer?

I sat down with Ryland Engelhart, son of Matthew and co-owner of the Café Gratitude and Gracias Madre restaurants, at the Earth to Paris summit this past December.

This was before Slaughter-Gate. At the time, I just wanted to ask Ryland what the hell a chief inspiration officer was. That was his honest-to-goodness job title. And I wanted to be fair, I wanted to be understanding, but the idea of a CIO was incompatible with the cynical parts of my brain that had metastasized in my rainy Boston youth. The East Coast had scoured a lot of the sunny sentimentality that comes so easily to LA folk from my palate. 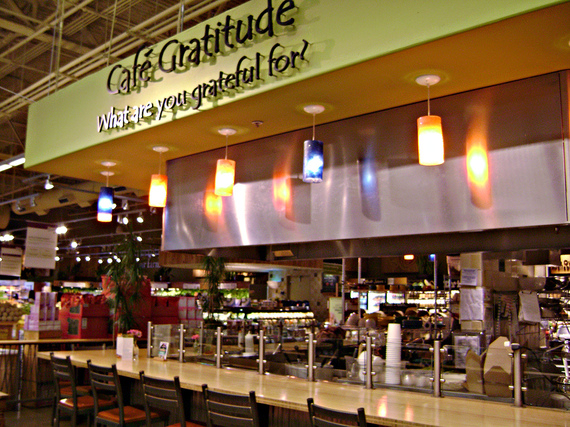 Still, I'm a professional. I waited, the two of us tucked into one of the busy backrooms of the summit, and we chatted about the restaurants. And then, very casually, I asked him what the hell is a CIO.

The answer was simple. Too simple. "But what does that mean?" I pressed him, trying to conceal the gleam of desperation in my bloodshot eyes. Ryland could not know that his position as CIO of Café Gratitude was an enigma to my cold and calculating mind. I'm a journalist, and we are dispossessed of such notions as love and accountability.

"It means training," Ryland replied. "I make myself available to the staff. Oftentimes I'm coaching, giving feedback, giving personal time to people in our organization so they feel connected to the ownership of the organization. We listen and care, so I field requests - almost like human resources, but from a cultural standpoint."

Ryland could see that I wasn't getting it.

"People say the vibe is really good," he clarified. "For the human beings that are operating in that environment, the vibration is one of fulfillment, of love, of feeling joy in their hearts."

Ryland smiled. We were in Paris, half a world away from California, and yet the man carried the promise of the Golden State with him everywhere. "At Café Gratitude," he said, "people see, oh, it's not just organic food. There's a continuity. Who we say we are, we are, and that requires effort and that requires attention to making sure that there's an experience on so many nuanced levels - that we actually are human beings who care about our people."

And there it was, beaming at me from the corner of that busy room in Paris, the answer to my question. The CIO existed to make sure everybody was feeling good about who they were and what they were doing. It was the soulful fulfillment of Don Draper's promise, "That whatever you are doing is okay; you are okay."

I wasn't sure if I believed it, but I was convinced that Ryland did - and does.

"The Biggest Regret Is All the Places We Withheld Love"

Ryland has worn a lot of hats, worked as a music producer, motivational speaker and coach; led workshops on sacred commerce and communication, co-created the documentary film May I Be Frank; and founded the non-profit Kiss The Ground. The last one is what matters here.

Overgrazing, industrialized agriculture, deforestation and urbanization have all contributed to this escalating crisis. The silver lining is that these are all human problems that have human solutions. Ryland wanted Kiss the Ground to be one.

"Soil can take care of itself," said Ryland. "We're the problem."

Kiss the Ground, he added, "is dedicated to communicating the potential for how soil and carbon sequestration, alongside land management, can be one of our greatest solutions. Right now, that's completely under-addressed."

The organization was begun three years ago in Ryland's living room in Venice, California. The mission was to raise awareness about the effect mankind is having on land, sea and air, and to promote healthier practices in both energy creation and agricultural management. Ryland's dedication to providing Café Gratitude with natural ingredients is what spurred that mission, but his personal philosophy is what has sustained him over the intervening years.

"At the end of our life we're going to look back and say the biggest regret is going to be all the places we withheld love," he explained. "What I loved was being in service; I loved feeding people healthy food."

When Matthew and Terces shared their decision to return to eating meat, sustainable land management was foremost on their minds. They didn't change anyone's menu but their own.

I suppose the point I'm trying to make is that, whether or not you believe in Jesus, good vibes or adjectival entrees, casting stones at the Engelharts isn't going to solve any of the planet's problems. You might not like their truth, but that doesn't make them liars.