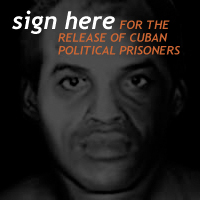 Never before has a document managed to collect so many signatures calling for improvements in human rights in Cuba. What's more, since the Varela Project - led by Oswaldo Paya - collected almost 11 thousand signatories to demand a democratic referendum in the country, we have not seen an similar flood of people adding their names publicly to a demand for change. The current campaign to demand freedom for political prisoners has been, without a doubt, an acid test for the injured Cuban civil society. With the death of the prisoner of conscience Orlando Zapata Tamayo, indignation has united citizens like no other common cause has done before. Even the breach, deepened by official propaganda, between Cubans on the Island and those in exile, has been disappearing with the tragic events of recent weeks.
In recent weeks, the initials of the name of this 42-year-old man from Holguin, dead after an 85-day hunger strike, have filled cyberspace, Twitter and our consciences. OZT is read everywhere and public figures who had once stood in solidarity with the Cuban government, today add their names to the demand for an amnesty. The years of trying to convince international public opinion of the existence of a country that was a reality only in the textbooks of Marxism, have come to an end. Every day more people in the world associate this island in the Caribbean with the word "dictatorship." The imprisonment of people whose only crime has been to express their opinions, confirm this.

So far, the organizers of this campaign have collected more than 50 thousand signatures and surprisingly, many of those who have added their voices have done so from within Cuba. The cycle of silence seems to he coming to an end inside the country, as well. Below is an introduction to the cause followed by the text of the petition, along with links for those who want more information. Please add your name.

As you probably know, dramatic events have taken place in the last weeks in Cuba: the death of prisoner of conscience Orlando Zapata Tamayo, an increased repression against Cuban civil society, and the hunger strike of dissident Guillermo Farinas, whose life is now pending from a thread. For these reasons, a group of human rights activists launched a campaign that demands freedom for all political prisoners and asks the Cuban government to uphold basic human rights on the island.

The campaign has been quite successful: the letter has been signed by more than 46,000 people in over a month. Among the signatures you can find movie directors Pedro Almodovar and Fernando Trueba (Academy Award winners), actor Andy Garcia, philosophers Cornel West, Kwame Anthony Appiah, Philip Pettit and Fernando Savater, musicians Emilio and Gloria Estefan, Paquito D'Rivera, Willy Chirino and Albita Rodriguez (all of them Grammy Award winners), writers Herta Muller (winner of the Literature Nobel Prize, 2009), Mario Vargas Llosa, Ana Maria Matute and Juan Marse (Cervantes Prize winners, the Spanish equivalent of the Nobel of Literature), Nilo Cruz (Pulitzer Prize winner) and Carlos Eire (National Book Award winner), alongside the majority of the Ladies in White. However, the campaign hasn't had a substantial impact in the American public. That is why I'd like to ask you to promote the petition in your blog, your Twitter or Facebook account, so you can help stir up the American conscience about the terrible situation of human rights in Cuba.

If you decide to join the campaign, you will be in good company. On March 24th, President Obama added his support to the "brave individuals across Cuba and a growing chorus around the world in calling for an end to the repression, for the immediate, unconditional release of all political prisoners in Cuba, and for respect for the basic rights of the Cuban people." A few days before, the European Parliament had adopted a resolution, condemning the "avoidable and cruel" death of Cuban political prisoner Orlando Zapata Tamayo and voicing its concern at the "alarming state" of hunger striker Guillermo Farinas.

I hope that you will make this your struggle too. Don't look away. This is not a Cuban issue. This is a human issue.

Here is the petition:

For the Freedom of Cuban Political Prisoners

For the immediate and unconditional release of all political prisoners in Cuban jails; for respect for the exercise, promotion and defense of human rights anywhere in the world; for the honor and courage of Orlando Zapata Tamayo, unjustly incarcerated and brutally tortured in Castro's prisons, who died while on a hunger strike denouncing these crimes and the lack of rights and democracy in his country; for respect for the life of those who risk death such as Zapata Tamayo to prevent Fidel and Raul Castro's government from vanquishing their critics and peaceful opponents by sentencing them to up to 28 years in prison for "crimes" of opinion; for respect for the physical and moral integrity of each person; we sign this letter and invite to sign it all those who have chosen to defend their freedom and the freedom of others.