I'd been in Niger for less than a day, and things were not quite what I'd expected. There are few obvious signs warning visitors arriving in the capital, Niamey, a slow-paced and laid back place, that life for millions of Nigeriens is beginning to get extremely desperate.

A worsening food crisis prompted the government to acknowledge a problem in March and launch an emergency appeal for help.

The appeal by Niger's new military leaders, who took power in a coup in February, was seen as an important break from the past. In 2005, during Niger's last serious food crisis, the previous government had strongly denied there was any problem.

Aid agencies, like Oxfam, have also been sounding alarm bells, warning that this year more than seven million, approaching half of the population, are facing hunger with malnutrition rates on the rise. Yet donors have been slow to respond and organisations like Oxfam are struggling to fund programmes to deal with the widening crisis.

Niger is already one of the poorest countries in the world. And it boasts some unenviable statistics: the fastest population growth in the world, which has seen the population rise from 2.5 million in 1950 to more than 15 million now; one of the world's highest infant mortality rates; more than 40% of children under-five underweight for their age, their growth stunted by hunger; low literacy and school attendance rates.

It's a country that often experiences cycles of drought which has a devastating impact on the majority of its people who live in rural area, depend on subsistence agriculture and breeding livestock. But this year has been worst than most. Erratic rains last year caused a 30 percent reduction in cereal production.

You would hardly know it in Niamey, where the bustling colourful markets are full of fresh fruit, vegetables and cereals. The same is true across most major towns, with much of the food imported. The problem, say analysts, isn't the shortage of food available, but the ability of people to access it.

Prices have soared - in some areas, doubling. But incomes have fallen by the same amount. Families have been forced to sell their highly valued but currently under-fed livestock and receiving prices that are pitifully below normal market rates. They're selling their remaining family assets and agricultural tools; often getting heavily into debt in order to borrow money to buy food and seeds for planting.

And that's forcing families to pull their children out of school and abandon their homes, moving to towns and cities, often crossing borders, in search of help.

Oxfam driver, Mohamed, pointed out people in the street to me as we traveled to the office. "They're not from Niamey", he said.

"They're beggars and they've come from the countryside."

Some estimate that the number of people begging in the capital has doubled this year. As we drove, I started to notice some telling signs. Often, women and children resting from the overpowering heat under trees; children approaching cars at traffic lights gesturing and pointing to their mouths that they are hungry and holding out their hands in expectation of food or money; women using sieves to sift through the sandy ground to find any grains of cereal that had escaped from food trucks. It wasn't so easy to tell, though, if these were families newly-arrived from the countryside. But outside the Oxfam office that morning, I met father of two, Issoufou Moumouni, walking down the street with a small tin bowl in his hands. He told me he had left his village in Fandou-Kaina, in Oullam region three weeks ago. He guessed that nearly forty men from the village of around 50 households had left home in search of work and food in the last few months.

"Its very bad this year. We can't grow anything. There is no rain and there is no hope", he told me, smiling ruefully. 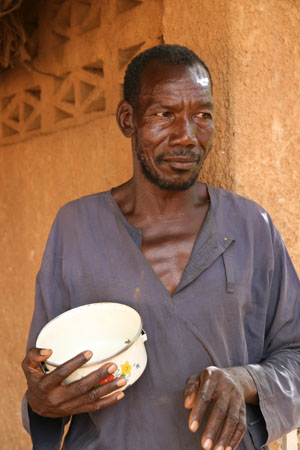 But if things are bad now, they're likely to get worse. We're at the start of what's known as the hunger gap season. There are several months to go before the next harvests in September. If Nigeriens, well-used to dealing with drought and hunger, are struggling now, one can only fear what will happen in the coming weeks unless they get much more help.