At a certain point in your mid- to late-20s, you will look around and take stock of the social matrix you have established for yourself. Perhaps you looked around your Super Bowl party in February, nary a man in site, to see a dozen women in leggings drinking red wine. Sound familiar? If so, you may be part of a group of women affectionately known as "girl's girls."

Most women enjoy the company of other women. But there is a special strain of human female who finds the company of women wholly preferable. There are social conditions that can create a girl's girl -- an awkward youth in which athletic activities and dating were eschewed for sneaky "Sex And The City" marathons and Jane Austen paperbacks, a stint at women's college or a career in a female-heavy field. But ultimately, it is a choice of companionship every woman has the privilege to make.

And those who do are in very good company: Chelsea Handler, Jennifer Aniston and Reese Witherspoon are all professed girl's girls. Those who prefer sisterhood aren't socially inept when it comes to interacting with the other half of the population. They have successful professional, interpersonal and romantic relationships with men (or other women). But those living a homosocial lifestyle can be ill-equipped to confront the bizarre proclivities and affects of the opposite sex. It can be disarming, but lest you start to feel alone, we've comprised a list of 25 totally standard effects of living as a girl's girl.

1. You're always a bit (or deeply) mistrusting of women who refer to themselves as "guy's girls."

2. Encountering a toilet seat left up is unsettling -- every single time.

3. You dress for women, rarely for men. Oxford buttoned up to the chin with drop waist pants and wedge sneakers? Check. Mate.

4. Brunch is your preferred method of catching up.

5. In high school you read everything Jane Austen ever wrote, but you still haven't read anything by Hemingway, 10 years later.

7. When someone in your life doesn't understand a "Now and Then" reference, your relationship shifts fundamentally.

8. When you hear an iPhone alarm it's usually someone's birth control notification.

9. You hear it happens often, but to be interrupted during conversation by a man is always jarring.

10. You aren't afraid to tell your male classmates and coworkers that they're being sexist.

11. You never have to worry if there will be something other than brown liquor or beer at a social event.

13. You haven't had many social opportunities to differentiate between them, so pretty much all men look the same to you. 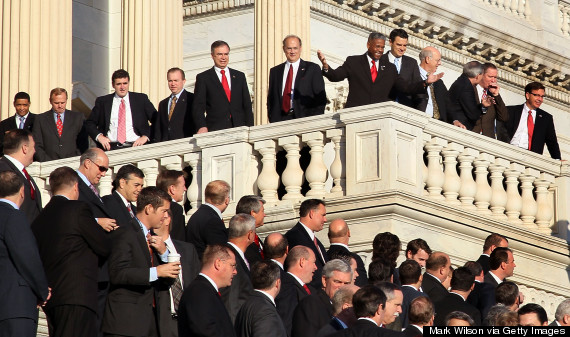 14. You are almost always wearing at least one piece of clothing or jewelry of which you are not the original owner.

15. If you need a tampon, it will magically appear.

16. If you could pick a lifetime partnership to emulate, it would be Tina Fey and Amy Poehler.

17. This is what happens when you talk to a weird guy:

18. This is what happens when you talk to a cute guy:

19. You're generally outraged when your female friends suddenly would rather hang out with their new boyfriends than the girls.

20. Male classmates or colleagues offering unsolicited advice on your current romantic situation is not well-received.

21. People often ask if you miss hanging out with guys.

22. And sometimes you think you should get a few more male friends.

23. You have a few solid dudes you can count on, no matter how often you complain about their brethren...

25...You just prefer to do them with your lady friends.

WomenGirl's NightFeminismgirls just want to have fun
Go To Homepage