If someone on the street asked you if you were happy -- what would you say?

Many factors influence how we feel on a day-to-day basis, whether it’s a struggle at work or an issue in our personal lives, and most of them can decline our feelings of positivity and well-being. And we aren’t alone -- according to the 2013 World Happiness Report, North American countries are less happy now than they were five years ago. But, as scientific research has discovered, happiness, to some extent, is a choice -- so why does it sometimes feel so hard to choose it?

One answer is a bit surprising: As it turns out, we may be more joyful than we realize -- we just aren't mindful of the signs. While no one can escape the pressures of jobs, inevitable conflicts and even bouts of depression and anxiety, much of our emotional well-being isn’t entirely dependent on external circumstance. To find more happiness, you might just want to look on the bright side. Below find 14 signs you really do have a sunny disposition -- and how to keep it that way. 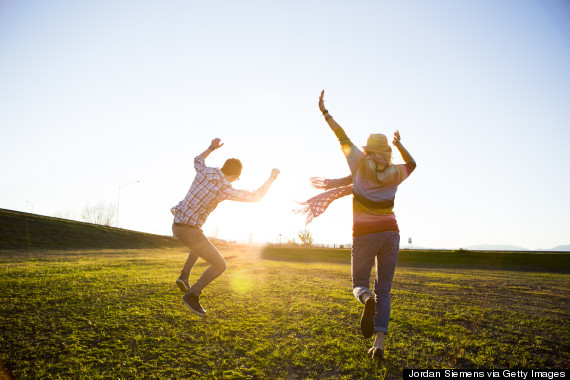 Whether it’s paying someone a compliment or performing a random act of kindness, when you’re really happy, you want others to be happy too. And sharing that joy can help continue those positive feelings -- studies have shown that being kind to others can actually help increase your overall happiness levels.

You don’t sweat the small stuff...
Just miss the train? Spill your coffee? It doesn’t matter. If focusing on what’s important and not obsessing over minor annoyances is a priority of yours, it may be a sign that you’re in a good place. Research has shown that those who swap focusing on the small, everyday negatives for emphasis on brief, joyful moments tend to be happier overall. Happy people don’t deny that there are peaks and valleys in life -- but by concentrating on what goes right instead of what goes wrong, you set yourself up for longer-term contentment and greater resilience when dealing with negative events.

...In fact, you appreciate the little things.
Nothing is greater than hearing your favorite song come on the radio or being outside and hearing a few birds chirp. The little things are what contentment is composed of -- and you recognize that. Studies have shown that practicing gratitude is a key component to a happy life, and if you’re thankful for the little things that make you smile, then it’s a good sign you’re on the right path.

You’re proud of other people’s successes. 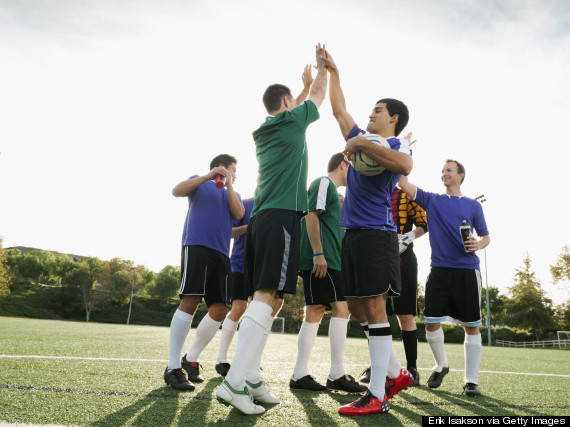 When you’re happy, not only do you revel in your own accomplishments, you also bask in the success of others as well. You know that celebrating other people’s victories connects you to others and offers a bit of good karma in the form of maintaining your own sunny outlook. As motivational speaker and coach Tai Goodwin explained in her blog on The Huffington Post, expressing genuine joy for other people can really pay off when it comes to your own happiness:

Rejoicing with others creates an opportunity to multiply the good times you get to celebrate. By seizing every chance to sincerely congratulate other's on their success, you are creating an atmosphere for others to be willing to celebrate your successes.

Living in the moment is very important to you.
Happy people know that living in the here and now is key to perpetuating a positive disposition. In his TED talk on how to be happier, happiness researcher Matt Killingsworth detailed how getting lost in the present moment actually increases our feelings of joy. After developing an app that measures happiness in real time, Killingsworth found that most people were at their happiest when they were focusing on the current moment.

“As human beings we have this unique ability to have our minds stray away from the present,” Killingsworth said in the November 2012 talk. “Maybe to really be happy we need to stay completely immersed and focused on our experience in the moment ... as it turns out, people are substantially less happy when their minds are wandering than when they are not.”

You’re in a healthy relationship (and not just with your significant other). 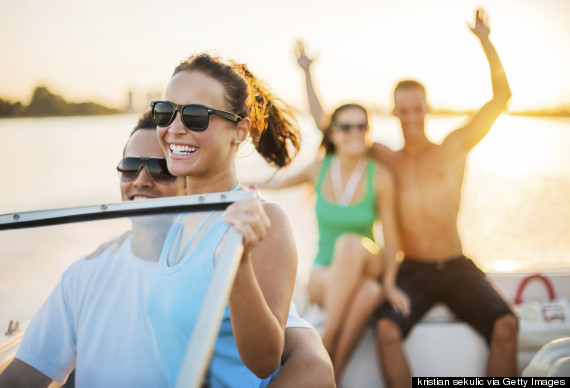 As a happy individual, you know that people -- not things -- are the true keys to a joyful existence. Physical and emotional intimacy are both important contributors when it comes to maintaining overall happiness levels.

In a 2012 study published in the Journal of Research in Personality, researchers found that marriage can protect against the normal declines in happiness levels that may occur during adulthood -- but you’re also deeply aware that’s not the only critical component to building a happy life. By making sure you have an extended social circle, you open yourself up for more joy -- especially as you get older. According to a study published by the Journal of Epidemiology and Community Health, being surrounded by a larger social circle during midlife has a positive impact on psychological well-being. By keeping healthy, interactive relationships -- with friends and significant others -- you’re making a large contribution to your overall happiness.

When something is stressing you out, you know how to calm down. 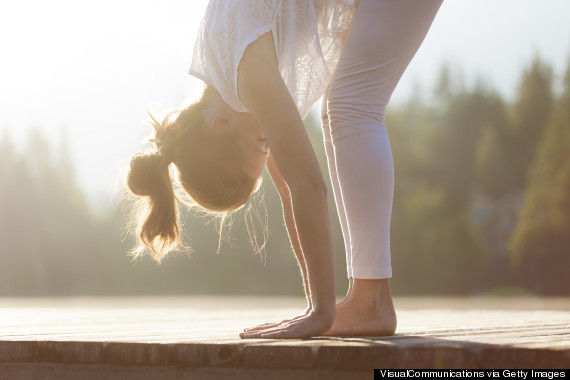 Keeping stress at a minimum is key to a happier lifestyle -- and if you’re really happy, chances are you’ve found some stress-relieving practices that work for you. As Heidi Hanna, a fellow at the American Institute of Stress and author of the book Stressaholic, points out, having go-to tricks helps you fight off everyday stressors that you may not even know are affecting you.

“It’s important at the first sign of stress that you have go-to strategies because it allows your brain to stay more flexible,” Hanna tells The Huffington Post. “By having certain tricks like taking a break, or meditating, you can think more positively and practice things like gratitude because your brain is more open to seeing the positive around you.”

Studies have shown that practicing meditation or spending a chunk of time exercising each day can not only lower your stress levels, but it can also make you a more positive individual.

Burning off some steam with your best friends can also help reduce anxiety and increase your happiness levels. Whatever method it is, you know what works for you in times of distress -- and you use it whenever necessary in order to keep those bad vibes in check.

You’ve gotten your “affluenza” shot.
Happy people know that money isn’t the influencer of joy -- in fact, after a certain point, it may even hurt their well-being. Recent data has suggested that people who pursue material goods -- as opposed to the pursuit of emotional fulfillment -- tend to be less satisfied and express fewer positive emotions each day. Instead of seeking the latest gadget in the store, you’re seeking other things (like good relationships) that have a positive impact on your life -- and that is making a significant contribution to your overall happiness.

You’re constantly adopting a glass-half-full mentality.
When you’re happy, you want to do everything in your power to make sure you’re capitalizing on those emotions. So when life throws you a lemon, you throw a party. Adopting a realistic optimistic attitude has been linked to greater success and overall happiness, and optimists even have healthier hearts and stronger immune systems. If you’re constantly looking on the bright side -- even when it’s a challenging situation that would normally get you down -- you know overall you’re really happy with life (because you intend to keep it that way).

You have a sister. 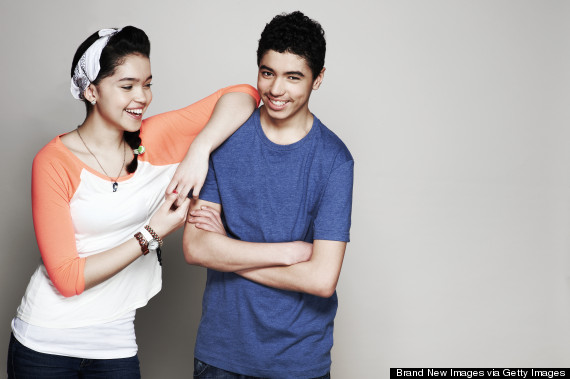 You may not think of your little sister as the key to your happiness or your older sister as an optimistic influence, but research conducted by the University of Ulster suggests otherwise. The 2011 findings showed that having at least one female sibling made both young men and women more able to communicate effectively and maintain positive emotions.

Making new friends seems to come easy for you. 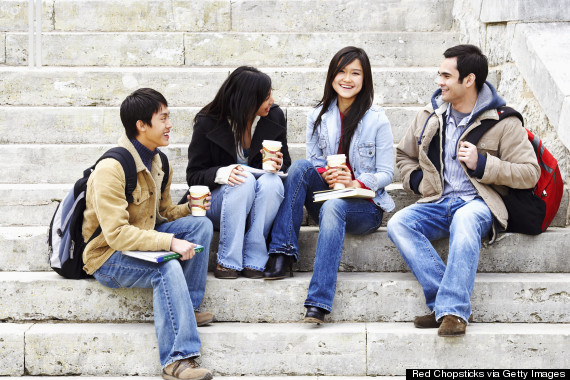 People want to surround themselves with those who make them feel good, so others are easily drawn to you. In a study published by the British Medical Journal, people naturally choose to connect with those who are happy because it improves their own happiness levels. Researchers found that if a social contact is happy, it can increase the likelihood that you are happy by 15 percent.

You’ve reached a goal (and you have more you want to accomplish).
If you’re really happy, chances are your feelings have been reinforced by obtaining goals you’ve set for yourself -- and you’re not stopping there. A 2011 study published by the the Journal of Consumer Research found that those who set themselves up for higher goals tend to be more satisfied with their lives than those who keep lower expectations. And it makes sense. Having something to work toward -- and then ultimately achieving it -- can help boost our feelings of personal worth. As Carleton University psychology professor Timothy Pychyl explained in a 2008 Psychology Today essay, pursuing our passions just makes us feel good.

“Progress on our goals makes us feel happier and more satisfied with life,” Pychyl wrote. “Interestingly, positive emotions have the potential to motivate goal-directed behaviors and volitional processes that are necessary for further goal progress or attainment.” 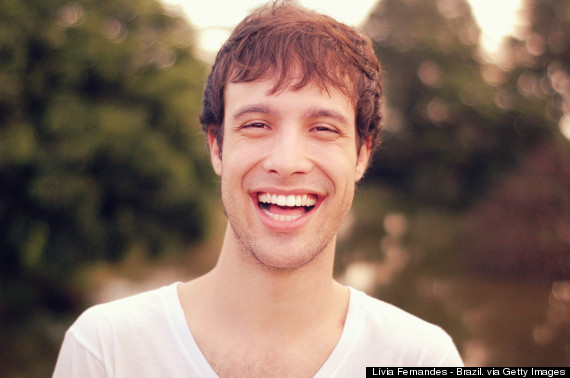 Can your yearbook photo offer insight into your happiness? Possibly. According to a DePauw University study, adults who fashioned big grins in their school photos were actually less likely to be unhappily divorced decades later. “The explanation with the most support, is that people who smile in their photographs have a more positive disposition and more extensive social network. When life throws us inevitable curveballs, those with a positive emotional disposition and strong social support tend to thrive,” explained study researcher Matthew Hertenstein in his book The Tell: The Little Clues That Reveal Big Truths about Who We Are. If you can’t stop grinning from ear-to-ear whenever there’s a camera around, there’s a good chance you’re actually boasting a positive disposition.

There’s nothing keeping you tossing and turning at night.
You may not think that you’re feeling content -- but if you’re not tossing and turning, it may be a sign that you’re living a life of happiness. A 2013 Cornell University study found that those who have consistent positive emotions tend to get a better night’s sleep. Researchers studied 100 participants and found that those whose reactions vary to life’s daily ups and downs tend to suffer in sleep quality compared to those who have stable, optimistic outlooks. 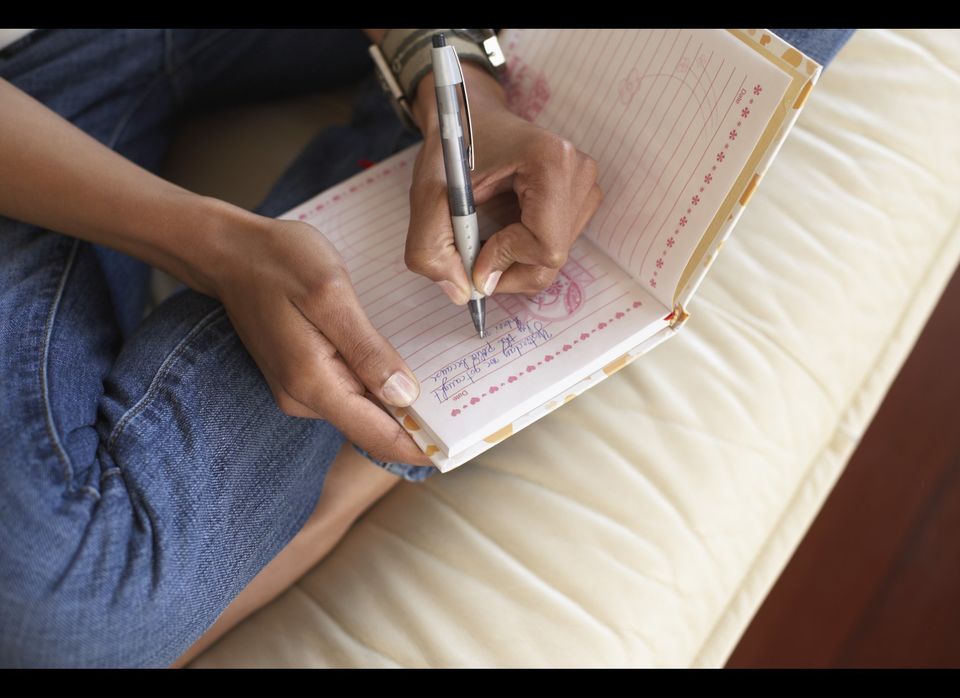 5 Ways To Turn Happiness Into An Advantage
More:
healthy livinghow to be happythird metricGPS For The Soulhappiness tips