Sushi or Mexican? Paper or plastic? Quit your job or wait for a promotion?

Some decisions in life are major and others insignificant, some obvious while others require a little more thought. But for indecisive people, all choices have one thing in common: They feel impossible to make.

It can be downright frustrating to deal with someone who just can't seem to make up their mind (and for this, as an indecisive person, I'd like to apologize on behalf of all of us), but there's a reason why we behave this way. Below are 10 things that perpetually indecisive people want you to know about their personalities. 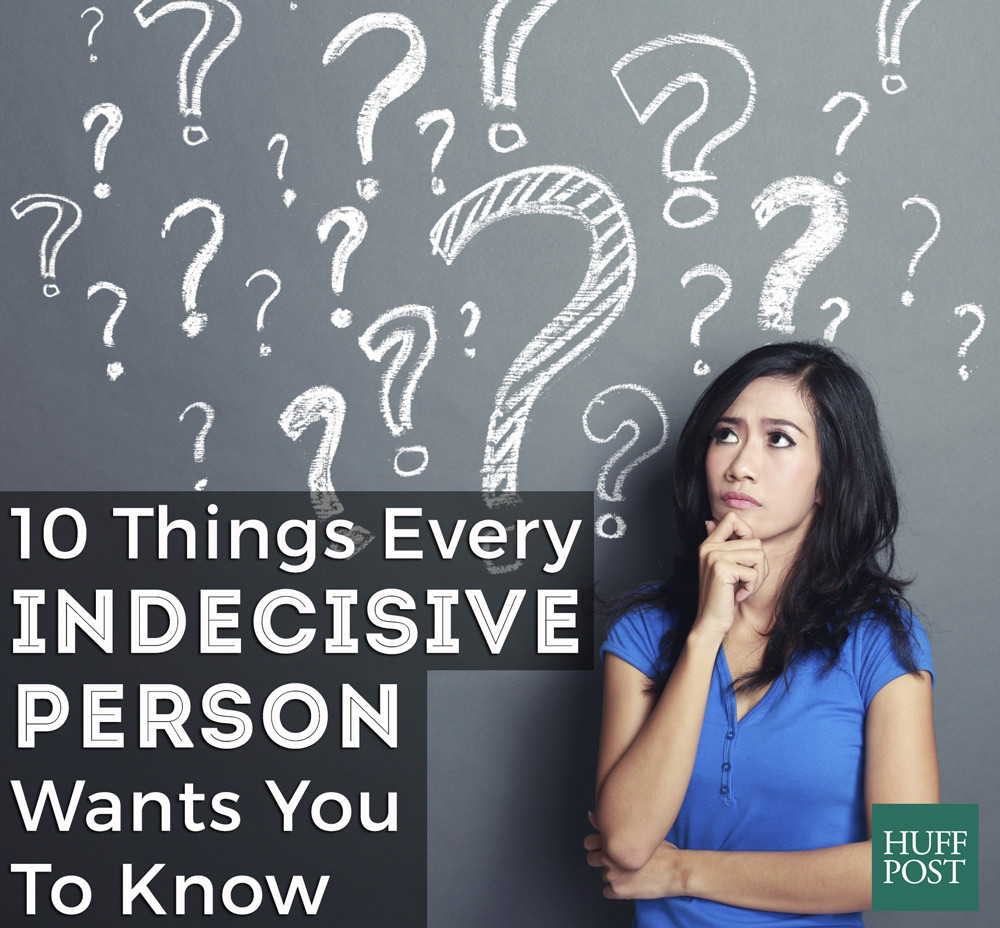 1. We prefer to just go with the flow.
Comedy movie? Thriller? We're not going to be the ones to debate it. We care about the company, not the activity.

2. We're people pleasers at our core.
We don't want to upset anyone over a choice we make, whether it's a weekend activity or a more serious issue like leaving our job for a new one. Harmony is when everyone is at peace with a decision -- we just need to remember to include ourselves in that equation.

4. We solicit pretty much everyone's opinion before figuring out our own.
Mom, Dad, grandma, the owner of our favorite bodega. Whoever they are, they help us make a more informed decision.

5. We're reflective.
We think long and hard about our decisions because we're terrified of making the wrong one. This isn't so bad in theory, but sometimes that reflection can get the best of us. Research suggests that indecisiveness is associated with excess worry, which is not so great for our health. And in more extreme cases, it may also be associated with mental health issues, such as depressive symptoms.

6. Big decisions are mentally exhausting.
We take a long time to make up our minds about the monumental changes in our lives, like moving to a different city or taking a new job. That's because we know how important they are and we don't want to mess anything up. Because of this, we put a lot of pressure on ourselves and that can be taxing.

A pro tip for all the fellow indecisive people out there: Go with your gut if you're short on time. Research suggests following our emotions generally lead to better outcomes rather than analyzing the details.

7. Even choosing where to go to dinner can be a chore.
"I don't know where we should go, but I know I definitely don't want to go to that burger joint, that Asian-fusion place or that Italian restaurant." Hey, knowing what you don't want is half the battle, right?

8. We sometimes agonize about our decision long after we make it.
That's because we're terrified of making the wrong one. We're not big risk takers, and would rather know the outcome as soon as something has been decided (which, as we all know, isn't always how life works).

9. Pro-con lists are our best friends.
Pros for going on a run: You'll feel better and you'll improve your endurance.
Cons: It's raining and there's a "Friends" marathon on TV right now.

10. We're really proud of ourselves when we efficiently make a decision.
Little by little we're trying to be more strong-willed -- even if that means just making a split-second choice on what chips to bring to a party. Practice makes perfect, right?

To all of our decisive loved ones, thanks for taking charge when we can't. Let's just say, if there was one thing on which we'd be quick to make a decision, it'd be that we weren't so indecisive in the first place.

Personality Traits That Could Lead To A Longer Life
Voting Made Easy
Register to vote and apply for an absentee ballot today
Register now
More:
healthy livinghplifestyle
Newsletter Sign Up
The essential guide to taking care of your mind and body
Subscribe to HuffPost’s wellness email
Successfully Subscribed!
Wellness delivered to your inbox