You can function just fine on 6 hours of sleep a night...or so you think. Here's how to tell if you're secretly sleep-deprived.

1. You’re clicking your pen and tapping your feet.

What's happening: When you move your muscles, you cue your brain to stay alert, says Hans P.A. Van Dongen, PhD, assistant director of the Sleep and Performance Research Center at Washington State University. So if you’re fidgety and restless and feel as if you you can't sit still or would rather (always) stand, Van Dongen says that "it could be your brain's way of trying to keep you awake."

What else you should know: Fidgeting could also be a sign that you've had too much caffeine. The recommended daily limit is 500 to 600 mg, or about 4 cups -- drinking more than that is another less-than-subtle sign that you need more rest.

What's happening: Lapsing, in technical terms, is when parts of your brain take a stealth catnap. When you’re exhausted, the sections that control attention and response time start taking breaks from processing new information, explains Van Dongen. These "mini-sleeps" could be as short as half a second, and you may not even notice that you've fallen into them.

What else you should know: Van Dongen suggests a lapsing test: Sit in a dark, quiet area while holding a pencil in one hand. Set a timer for 5 minutes, and just relax and breathe. If the pencil drops, that's a clear sign you and your brain need more sleep.

3. You're having trouble swiping your office ID, balancing your coffee and making it through the door before it closes again.

What's happening: This combination of simple tasks, done in sequence and under a time limit, is a fine test of your psychomotor skills and coordination, which are some of the first things to go when you skimp on shut-eye. In one 1997 study, researchers found that a person who has gone for even one night without sleep is about as impaired on early morning hand-eye coordination as someone who has a blood alcohol level of .10 percent, also known as legally drunk.

What else you should know: Sleep deprivation doesn't have the same effect on the parts of your brain that handle critical reasoning, so even if you're having trouble with appliances, you still may have no noticeable problem with writing a strategy memo or analyzing reports.

What's happening: Your brain is having trouble telling you how to behave, so you're more reactive to stimuli from your surroundings. The sun seems so bright and cheerful, the coffee tastes soooooo good and that cat going nuts with the empty cereal box is just hi-larious.

What else you should know: Staying on an even keel will be your big challenge today, says Van Dongen. Your mood will probably go from goofy to grouchy as soon as something doesn't go your way.

What's happening: Watch out, coworkers, spouses and innocent bystanders: Weakened emotion-regulating systems in the prefrontal area of the brain may make it hard for you to control and express your feelings. For example, if someone criticizes you, it will upset you more than usual, says Van Dongen, and you'll be more likely to say or do something you'll regret. Research from William D.S. Killgore at Harvard Medical School also showed that two nights without adequate sleep was associated with a reduced tendency to think positively and a lack of willingness to take action to solve problems. "Thus, sleep-deprived individuals appear to be more easily frustrated, intolerant, unforgiving, less caring and more self-focused than when fully rested," he wrote. In other words, you're acting kind of jerky.

What else you should know: While caffeine may give you a shot of adrenaline, studies show it's often ineffective at fixing the other emotional glitches brought on by sleeplessness.

What's happening: Research has shown that just one night of meager sleep lowers levels of the appetite-suppressing hormone leptin and boosts levels of hunger-increasing ghrelin. The body wakes up craving quick, easy energy: That choco-chunk muffin will do, thank you. Volunteers in one study at the University of Colorado at Boulder who got 4.5 hours (or less) of sleep also reported feeling more ravenous than those who got the magic 7 hours.

What else you should know: Eating breakfast within an hour or so of waking has been shown to increase alertness and improve cognitive performance. So embrace the carbs, but make sure they're the slow-dose kind that won't cause you to fizzle (steel-cut oatmeal is a great choice).

What's happening: Your body is keeping you up for that last stretch of the evening so it can get you back into a rhythm, says Rafael Pelayo, MD, a sleep specialist at the Stanford University Sleep Medicine Center and an associate professor of psychiatry and behavioral science. He says that what often happens is the patient who's been running on empty will promise herself she'll go to bed early. "Early" rolls around and she feels fine, so she keeps getting things done...but then ends up with only 6 hours of sleep (again). When she snoozes through her alarm, she tells herself everyone has trouble getting out of bed.

What else you should know: We fall into our deepest sleep during the two hours before our natural wakeup time, Pelayo says. So put down the to-do list and pick up the toothbrush: It's still easier to force yourself to go to bed than to force yourself to wake up (starting with 15 minute increments can help).

Own OWN Empower Yourself OWN Healthy Mind & Body Sleep Debt

7 Signs You're Secretly Sleep-Deprived
Sleep Myths You Can Ignore 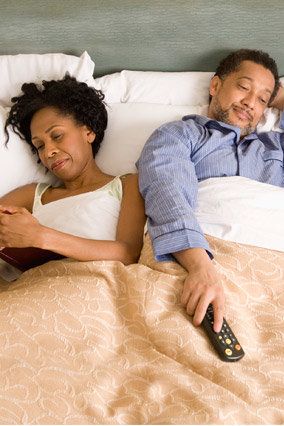 1 / 7
"Dozing Off To The TV Is The Worst Thing You Can Do."
Several sleep experts admitted to us that they regularly watch TV in bed -- even though they warn patients never to do this. They, like lots of people, have fallen into the habit of letting background noise lull them to sleep. However, their televisions don't stay on throughout the night, because the light from the screen stealthily interferes with the brain's production of melatonin and disrupts deep sleep, says Sam J. Sugar, MD, director of sleep services at the Pritikin Longevity Center & Spa in Doral, Florida. Sugar recommends either turning off the monitor display or, better, putting the television on a timer that will power down the entire system after 30 minutes -- by which time you will likely have drifted off (hopefully not in a propped-up position with your face turned to the screen).
Thinkstock