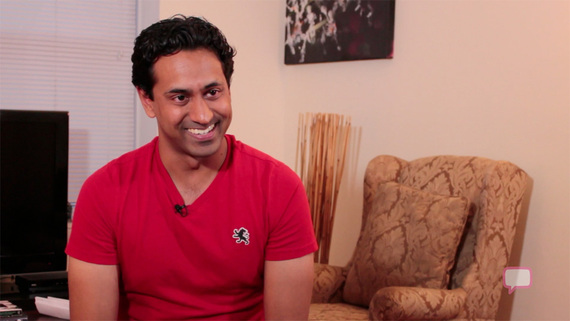 Mandeep Jangi of Middlesex, New Jersey, cites his Sikh faith as the "more visible aspect" of his identity. His decision to cut his hair (long hair is a traditional part of Sikh culture) was the first step to discovering his own individual identity. Mandeep describes his family's reaction to his decision:

Everybody got entirely silent. ... My mom started crying, because it meant a lot to her for me to keep up that faith and tradition. But largely the reason why everyone got quiet and the energy levels changed was because of my father. Everybody was very curious what my father's reaction would be. His reaction was that he assumed I was doing it out of shame. I told him I wasn't.

However, after his haircut, Mandeep could sense that something still wasn't exactly right. He felt a sense of uneasiness that he traced back to a lack of embracing his sexual orientation. After struggling with his closeted gay identity, Mandeep took a huge step forward: He came out to himself and then to his family:

I said the words out loud to myself in my car: "I'm gay." And that was the first time I ahd ever said those words out loud, and it felt amazing. Thanksgiving Day I told my family. ... And I could barely get the words out. I was choking up, I was getting teary-eyed, and my mom got very serious, and she was asking me, "Mandeep, what's happening?" And I choked out the words "I'm gay."

After Mandeep came out to his family, he realized how truly important it is to be true and honest with yourself:

People need to realize that it's OK to march to a different beat. So really the message is: Do what you need to do. Take care of yourself, because probably no one else will until you take those first steps.