(RNS) Sikhism is the world’s fifth-largest religion, a monotheistic faith founded in the Punjab region of India about 500 years ago. Most of the world’s 25 million Sikhs live in India, but more than 500,000 make the U.S. their home.

Here are some facts about what Sikhs believe and Sikh culture.

* Sikhs believe everyone, men and women, has equal status before God, who created the universe and all faiths. Human beings are encouraged to develop their moral character through generosity, humility and self-reliance.
* Sikh means “seeker of knowledge” in Punjabi, the language of India’s Punjab region and of Sikhism’s holy books.
* Sikhism was divinely revealed to its first guru, or prophet, Guru Nanak, who died in 1539. Nine gurus followed him, the last of which, Guru Gobind Singh, died in 1708.
* Sikhs keep their hair uncut, or natural, as a sign of living in harmony with God. Men — and some women — cover their hair with turbans as a mark of their faith. Boys start wearing a patka over their hair when it is long enough to tie into a topknot.
* The kara is a steel bracelet worn by Sikhs to remind them of the unity of God. The kirpan is a ceremonial dagger (though not a weapon) that is meant to remind Sikhs of the duty to fight injustice.
* The Sikh place of worship is known as a gurdwara, and it is where the Sikh holy book, the Guru Granth Sahib is kept, though copies are also found in Sikh homes. In a gurdwara, all remove their shoes, and women cover their heads.

* The central Sikh shrine is the Harmandir Sahib in Amritsar, India, which is also known as the Golden Temple.
* After services, Sikhs partake in the langar, a communal meal, typically of Punjabi food, cooked and served by volunteers.
* The first Sikhs came to the U.S. about 100 years ago. They are most concentrated on the coasts, with a large Sikh population in Queens, N.Y.
* Sikh is properly pronounced “sik” but you will likely not be corrected for saying “seek.” 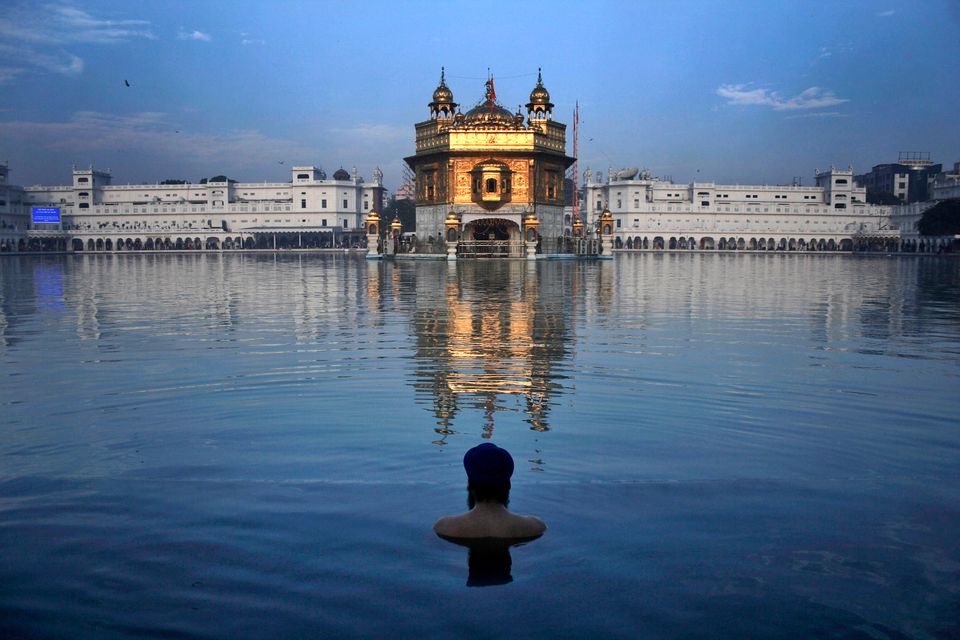 1 / 20
An Indian Sikh devotee takes a holy bath in the sacred pond of the Golden Temple, Sikhs holiest temple, during the birth anniversary of Guru Nanak, in Amritsar, India, Wednesday, Nov. 28, 2012. Sikhism was founded in the 15th century by Guru Nanak, who broke away from Hinduism, India's dominant religion. He preached the equality of races and genders, and the rejection of image-worship and the caste system. (AP Photo/Sanjeev Syal)
AP