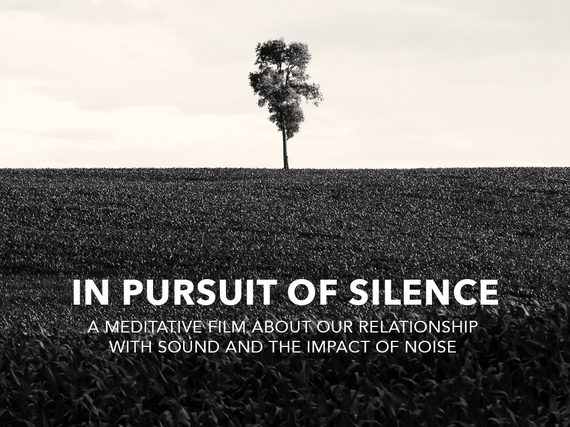 As much as society tells me noise is more golden than silence; silence still whispers mystery to my mind and heart. I'm continually engulfed in modern day life with beeps, vibrations, commercials, news feeds -- a variety of attacks on all my senses. Yet, silence's mystifying self still delicately reaches for my curious heart.

"The world is now so noisy with this cacophony going on visually and auditorily, it's just hard to listen; it's tiring to listen." Julian Treasure, 4 time TED speaker, CEO of The Sound Agency and interviewee of In Pursuit of Silence

"Silence makes us whole, if we let it..." Thomas Merton

I also believe the voice of silence is still speaking, if we let it. I feel as though I am getting to hear that voice regularly since I've been working on the upcoming documentary film, In Pursuit of Silence. Director Patrick Shen plans to give viewers the opportunity to examine the lack of silence and the abundance of noise in their own lives. He promises pauses and silences throughout the film in order to promote one's own personal interpretation of their relationship with noise and silence.

"Why should we care about silence -- because it's half of our existence in terms of our interaction with this world of discourse... It's fundamentally embedded in everything that we do: in our relationships, in our work, in our waking and our sleeping..."
-Helen Lees, author of Silence in Schools and interviewee of In Pursuit of Silence

Working with Patrick has given me an edge to understanding his art in a unique way. His previous films have touched on other areas of the unexamined life including a film about death anxiety: Flight From Death: the Quest for Immortality, a film about wisdom in unlikely places: The Philosopher Kings, and a film about a man's journey to bring clean water to his Haitian village: La Source. I could go on to share about his resume in film festivals, awards and various platforms he's been on but the more important aspect here is who Patrick is and not what he's done. I'm not sure what words he would use to initially identify himself, but I'm sure it'd begin with identifying his relationships: he's a father, a husband, a family member, a friend. My experience with Patrick has been that he is dedicated to not only his art but also the arts of others. Patrick's passion for silence developed after he saw Into Great Silence, a film about Carthusian monks in France. He's poured over 2 years of his life into this current project through his traveling, his reading, his often unshared moments with silence, etc.

I'm really interested in examining the ways we interact with each other, with the world and the way we craft meaningful lives in the midst of so much uncertainty. The search for meaning is already a noisy affair and the constant attention that the cacophony of modern life demands from us just makes it all the more disorienting. Of the many things that silence can be and do for us, the most powerful might be its ability to reset our minds and hearts, a blank canvas upon which to paint the story of our lives. In a world that consumes so much of us, silence is needed more than ever to free us.

Patrick and I met while I was in the midst of a journey traveling to the 17 Trappist Monasteries in the US. He not only respected my work but to this day he is encouraging and excited about it. His call to come join the team came less than a year after we met, just when I was sinking back into life as a counselor.

So, why make a film about silence?

Why add to the bombardment of our senses to get a point across of minimizing it? For me, now is the time simply because this truth has not been told in this way. Although this is the first film I've worked on, my initial thought is how could we not make a film about silence? Documentary filmmakers have been known as the truth tellers in the entertainment industry and I couldn't agree more. To make a film about silence is a risk within itself because society's signs point to everything but silence. Our small team working on In Pursuit of Silence is a dedicated group of individuals who have their own unique draw and attachment to the mystery of silence.

Why are we more afraid of silence than noise?

According to The World Health Organization, noise is second only to air pollution as an environmental cause of ill health, "it's not just about annoyance, it's about life and death now. And its about this modern lifestyle that offers us no space for ideation, reflection, introspection or respite," says Patrick in our recent Kickstarter video.

So why do we keep insisting on filling the empty spaces with words, the blank pages with notes and the commutes with music (or, if you're like me, talk radio)?

"What we're afraid of with silence, why we keep putting discourse, noise, talking, into these spaces of silence that we could make use of ­ is because silence returns us to what is real ..."
-Helen Lees, author of Silence in Schools and interviewee of In Pursuit of Silence

In my own experience, I've found this to be the case: silence brings me back to what's real, what the truth is -- in the world and within myself. That's not always a pretty thing, there's some sort of purification effect that silence has when one practices it regularly and it's not an easy process.

"I think silence is really important, as I've said it's one of the practices that develops listening and I almost worship silence, you know, it's such a rare commodity these days, it's rarer than platinum."
-Julian Treasure, 4 time TED speaker, CEO of The Sound Agency and interviewee of In Pursuit of Silence

Join us in sharing silence.

As previously mentioned, we at In Pursuit of Silence have launched a Kickstarter campaign for finishing our film: we're hoping to raise at least $40,000 and need your hand as we have less than two weeks to go. The funds are to cover final production trips and help launch us into the editing process so this ever important topic can get to film festivals, in our mailboxes, theaters and on our computer screens.

"Silence is what you already have, right now, but you need to let it in."

-Helen Lees, author of Silence in Schools and interviewee of In Pursuit of Silence

Silence is speaking... will we listen? 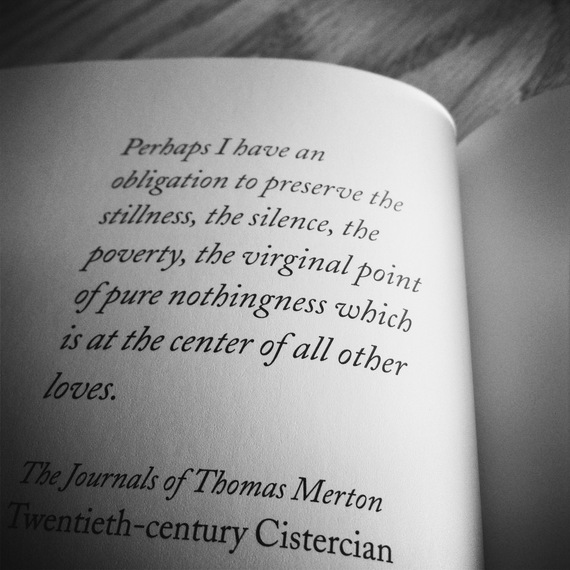