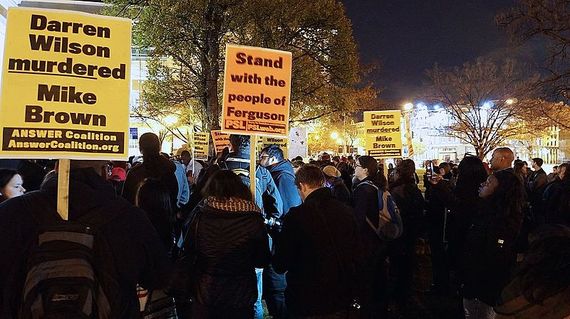 With so much angst and unrest unfolding throughout the world, most of which we're made aware of in minute-by-minute bursts, the pressure to show our social activism bona fides is intense, ofttimes bearing down like a hurricane with an agenda. We're lectured by Facebook friends in large, seething capital letters; badgered by petition hawkers, meme makers, and click baiters. We're admonished to "get involved!", "speak up!" or "take a stand!" (always with exclamation points), pushed to raise funds, raise fists, and raise a ruckus with warning that "silence is compliance," the act of quietude being interpreted as the worst kind of apathy.

Of course, some people don't care; they sit back and watch the news 24/7, jabber about it on social media, at corner coffee shops, or anywhere anyone will listen to them, but they don't feel particularly compelled to get active. They see that as something someone else will do, someone with more energy, more time, more money, more wherewithal. They're happy to sit in their corner of the world, living life without the noise and chaos of involvement.

But for those who do feel a pull to DO SOMETHING, the trick becomes figuring out what to do that's authentically effective and not just a dog and pony show that looks good on paper but offers little avenue for change. Because, despite the many call-to-action posts, the countless links to information and sociopolitical events, what really works is not, perhaps, as clear as might be presumed.

It's been documented that some of what worked in other eras is not particularly effective today. Sometimes action makes the participant feel good, like they've contributed something of value, only to lack integration with any tangible next steps. Sometimes joining a movement, signing a petition, participating in a sit-in, burning down a building, may feel like it's making a statement; impelling heightened awareness, or demanding meaningful resolution, when too often it's little more than the day's news fodder, another event we'll discuss for a cycle or two with no practical application.

Which makes being a responsible activist a little less obvious to sort out.

And beyond that confusion, there is also an element of peer pressure to field from those who take very seriously their particular prescription for "what you should do." I have witnessed, and experienced, admonitions from some who've felt their way of contributing was the best way and, therefore, the way others should do it. I've read posts berating one person's cause because the poster believed it wasn't big enough, inclusive enough, or "as important" as some other cause... predictably their cause. I've seen friends come to blows, families "unfriend" each other; good, conscious people behave badly in the effort to inspire belief and participation. I've personally been finger-wagged by some who've wondered why I haven't written about this or that event, with implications that I've gone soft to avoid conflict. The entire exercise of how we promote and inspire activism has too often become a show, a status symbol intended to exhibit "just how involved I am!" with little concern for effectiveness or anyone else's personal path. Memes shouting accusations about what "silence" means tend to forget that, in the cacophony of relentless media exchange, sometimes there is no message in the madness; it's just noise.

And, often, it is noise that's misinformed, inaccurate, unnecessarily inflammatory, and of little productive use. As a political and cultural writer over the years, I've seen far too many articles emerge from unfolding events that touted incendiary information that later turned out to be false or misleading (i.e., the host of falsely accused Boston bombing suspects, erroneous reporting of Michael Brown's shooting, and the notoriously inaccurate Rolling Stone rape story). Yet many an activist has leapt upon those stories to inform how they view that event, how they act in response, or how they push others to think and act. And often those who urge caution, who choose to wait for more accurate information, who consciously listen to evolving viewpoints or decline public participation until effective responses can be gleaned, are accused of complacency. The wisdom of listening gets lost in the cultural urge to react.

The fact is, not everyone shares the philosophy that shouting out loud is the best way to solve problems. Not all compassionate, caring people think burning cities or throwing rocks is going to bring necessary change. Many powerful, passionate people choose to pursue their activism more quietly, less conspicuously, and without announcement on Facebook or Twitter. There are those who persistently give to organizations and charities that work to improve conditions in ways that will ultimately improve the world. Those who quietly raise or teach children about ethics and honor, nurturing a generation that will be more tolerant, less brutal, more culturally empathetic. Some are writing inspiring books and articles, sharing uplifting art, engaging in and encouraging constructive, creative conversations that engender elevated thought. Others quietly help out in shelters and elder homes to assist those in need. There are even the more spiritually oriented who believe the power of thought and prayer can alter energy toward the diminishment of turbulence and anger.

Whatever you may think of these myriad paths toward similar goals, the fact remains that every person who cares to contribute is allowed to do so in their own way, without badgering and recrimination. Shouting at someone about their "complacency" may not only be presumptive and bullying, it may be profoundly off-base.

At a time in history when noise is rampant, information bounces rapidly between truth and fiction, and the spectrum of humanity is vast and varied, it would do everyone good to quiet down enough to honestly focus on their own process, encouraging and inspiring others without judgment or presumption, and moving forward, however they choose, with eyes and ears open to honestly observe, listen, and learn through observation and experience. That path can sometimes be a wild ride... and sometimes a very quiet journey.