As we celebrate Medicare's 50th anniversary on July 30th, it's important to remember that one of Medicare's most important hallmarks is the program's long and successful history of adapting to the changing demographic and health security needs of America's seniors. One of the first major expansions came in 1972, during the Nixon administration, when Medicare coverage was added for Americans with disabilities and end-stage renal disease. The Part D drug benefit was added in 2003 and in 2010 the Affordable Care Act included many Medicare benefit improvements which are projected to save Medicare beneficiaries, on average, about $5,000 over the next 10 years.

Throughout its history Medicare has always been a dynamic program. Unfortunately, today it seems the only time Congress talks about Medicare is to cut benefits, shift costs or find ways to take money from the program to fund other federal priorities. Last year's vote to extend the Medicare sequester cuts to cover a reversal of cost-of-living cuts to veterans' pension benefits was followed just last month by a proposal to use Medicare to pay for part of the training assistance for workers who lose jobs due to the trade deal. Using Medicare to fund unrelated programs is a relatively new yet growing trend that Congress must stop. Medicare isn't Washington's ATM. American families who've helped fund the Medicare program know they'll need it in the future and savings from changes in Medicare policy should only be used to meet the needs of current and future generations of seniors.

Ten thousand Americans turn 65 each day. A 65 year old senior today may live another twenty years, contrasted with a 65 year old senior in 1965 who was expected to live less than ten years. Unfortunately, living longer (for those who do see increased longevity) does not mean living healthier. Now is the time we should be investing and expanding Medicare to ensure our growing elderly population remains as healthy as possible. Instead we're seeing just the opposite approach from many in Washington.

But it doesn't have to be this way. As Medicare marks its 50th year milestone there is one significant coverage gap which, if closed, will improve millions of American seniors' health while potentially reducing instances of depression, cognitive impairment, life-altering falls, social isolation and the lack of independence which all come with hearing loss.

Hearing loss is the third most prevalent chronic health condition facing older adults. Yet an estimated 70% of Americans with hearing problems between age 65 and 84 are not using hearing aids. With an average cost of $3,000 - $7,000 and zero coverage from Medicare, it's little surprise that for a senior collecting an average monthly Social Security check of $1,287, hearing aids are seen as a luxury they simply can't afford. In truth, hearing loss which goes untreated has proven to be a wider health threat not only for seniors but also for the Medicare program overall. It's a threat our nation can no longer afford to ignore.

A growing number of studies have suggested linkage between hearing loss and increased hospitalization, depression and cognitive decline including dementia. Based on a study of older adults that began in 1958 in Baltimore where individuals were followed for more than 10 years, those with hearing loss had a higher probability of developing dementia with the probability rising with the severity of hearing loss. Findings released by Dr. Frank Lin in early 2014 from a Johns Hopkins University and National Institute on Aging study found that the brain becomes smaller with age and the shrinkage seems to be fast-tracked in older adults with hearing loss. The relationship between hearing loss and the development of dementia is "convincing and striking" according to some researchers and these findings add to the growing list of health consequences associated with hearing loss.

It's a national tragedy that millions of Americans continue to suffer the isolation and potentially long-term cognitive damage which comes with untreated hearing loss. It's fiscal irresponsibility to ignore a comparatively inexpensive intervention that could alleviate and even prevent the much greater national expense resulting from inaction. Consider these basic facts: America will spend $20.8 trillion dollars over the next generation to care for people with Alzheimer's. That's more than the entire federal debt accrued by our nation over the past 36 years. By 2050, without changes in federal policy, spending in the Medicare program for Alzheimer's and other dementias will increase fourfold to $589 billion in 2050. Put into perspective, that's nearly the annual budget for the entire Medicare program today. An ounce of prevention now, allowing Medicare to cover the cost of hearing aids for the vast majority of seniors who are going untreated, could not only improve lives but could have a positive effect on Medicare's bottom line.

When Congressman Claude Pepper introduced H.R. 1127 in 1977 to allow for hearing services under Medicare, America's senior population was smaller, life expectancy was shorter, and our knowledge about the connection between hearing loss and other physical and mental illnesses was more limited. Today, the costs of hearing loss vs. benefits of hearing aids are much clearer. Some in Congress, notably Rep. Debbie Dingell (D-MI), have taken up the cause with legislation that would provide Medicare coverage for hearing aids. We not only support this legislation but also urge the federal government to study the economic impact of hearing loss, evaluate the projected costs of lifting the hearing aid exclusion in Medicare, and hold Congressional hearings to address the issue and its impact on seniors. 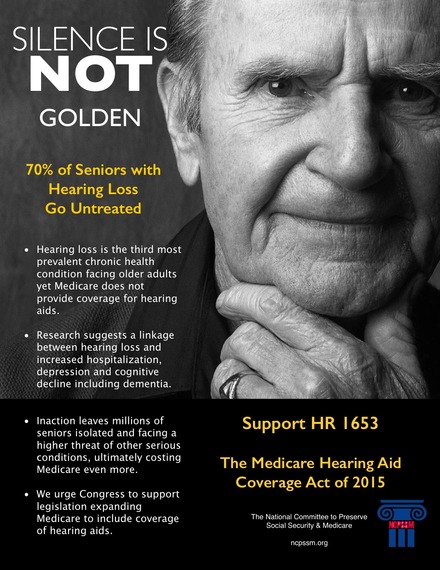 President/CEO of the National Committee to Preserve Social Security & Medicare