"Oh!" my mom said as we chatted on the phone. "Dad and I would love it if you and Ed could come with us to Christmas Eve services." And there it was, the conversation I desperately didn't want to have. "Our friends would love to see you," Mom continued, and inwardly I winced.

I knew my parents got a lot from their church, not just spiritually but socially. Mom has always been a social person. Even at age 82 her calendar is filled -- theater events, concerts, parties, progressive political gatherings. And their church had weekly dinners and coffee hours and was a constant source of new friends.

But as the mother of a son I'd suspected was gay back when he was 3, I was highly aware of how dangerous and damaging some organized religions could be to the LGBT community. As a gay-rights activist, I knew of the huge amounts of money that supposedly "Christian" denominations donated to anti-gay causes. And I was particularly incensed by messages of hate and "otherness" spoken from the pulpit, messages that could grow and backlash and perhaps physically harm my son or someone else's child.

When my mom and dad lived in Connecticut, they attended a church that flew a rainbow flag. They always loved and supported their grandson Jason unconditionally. And I knew that it had never occurred to my parents that here in this Florida church, the sentiment that "God loves all his children" was interpreted differently, that "all" did not mean all.

I'd made vague excuses before, when Mom had asked me to attend Christmas Eve services, but this time I was blunt: "I can't go, Mom. I'm not welcome there."

She was astonished. "Of course you're welcome!"

"I'm not," I said, "because Jason's not welcome." I took a deep breath and just said it. "Your church is anti-gay. And I'm sorry. I won't set foot in there again."

A few days later Mom called me back. "If our church is anti-gay," she announced, "then I'm going to change it by starting a PFLAG chapter. In fact, we're meeting with the pastor this week."

"That's a great idea." Inwardly I winced at the boatload of hurt that I knew was going to be launched at my mother. "Let me know how it goes."

Mom brought her usual enthusiasm to her meeting. But the senior pastor was resolute. Sponsoring a PFLAG group, he said, would be divisive in the church. Mom told me later, "He said one of the church tenets was that LGBT people were welcome -- but only if they were celibate!" She was outraged. "In other words, 'Thou shall not love or be loved.'" That was not OK with Mom, who wanted Jason to find his Mr. Right and live happily ever after. ("I'm not getting any younger," Mom tells me each day that I don't call to announce that Jace is marrying the man of his dreams.)

My lionhearted parents then spoke to an associate pastor, who, to their shock, simplified the church's beliefs with the flat statement "all homosexuals are sinners." Picture Mom and Dad sitting in this guy's office as he informed them that he believed that their beloved, sweet, kind grandson Jason was a sinner who was going to hell. No discussion, conversation over, have a nice day!

Now, Dad's a scholar who's studied the Bible. Imagine him quoting Bible verses about love to a man who wouldn't listen. And yeah, Dad stormed out.

Mom valiantly stayed and attempted to sway the pastor. She later told me, "When you find yourself in a group that's restrictive in ways you can't accept, there're two things you can do. First, try hard to change that group, especially if you believe in your heart that it's the right thing to do. But if that doesn't work, you do the second thing: You find a better group."

And so my mom and dad did something that few people ever do: They walked their talk. They cut ties with their longtime church because they realized that Jason really wasn't welcome there. And they set out to find a truly open and affirming church.

I knew how hard this was for my parents. They weren't just leaving a church; they were disconnecting from an entire community. I'd mentioned their struggles to my good friend Deede, who lives her personal faith with joy, and she emailed Mom with a short list of LGBT-friendly churches in Sarasota. That alone was a moment of triumph, realizing that gay-friendly churches existed in Florida!

Now, I love to imagine this part of the story from the point of view of Doug, the very handsome man who was on the welcoming committee of Sarasota's First Congregational United Church of Christ on the Sunday that Mom and Dad first visited. I imagine Doug smiling and greeting my dad and my beautiful, vivacious mother by saying, "Welcome, folks! Are you from out of town?"

"Oh, no," Mom corrected him. "Fred and I have lived in Sarasota for years. But we just found out that our old church is anti-gay, so we won't go there anymore. We're shopping for a church where gay people are welcome."

I can imagine Doug's heart expanding in his chest as he called over Thom, his partner of 45 years, to greet my parents too. If I were writing the screenplay of this story, I'd have Doug kiss Mom's hand and say, "Oh, honey, you're home."

But whatever he actually said to Mom and Dad that day, they got the message loud and clear. The people in this wonderful church believe that God loves all his children -- no exceptions, no conditions, no exclusions. They were home.

Needless to say, Mom and Dad made friends there, fast. And the church gained two very active and enthusiastic new members. Win/win. Actually, triple win for Mom, since Ed and I now attend Christmas Eve services there, without fail, whenever we're in town. 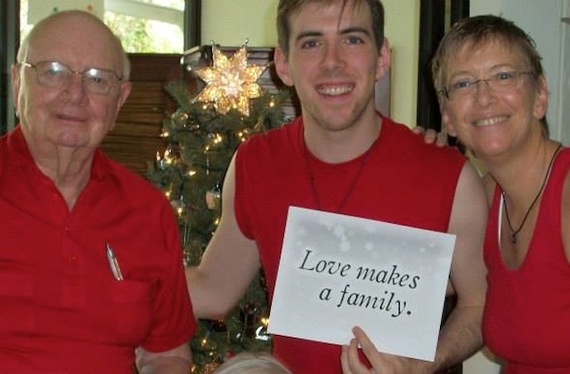 My dad, Fred Brockmann; my son, Jason T. Gaffney; and me 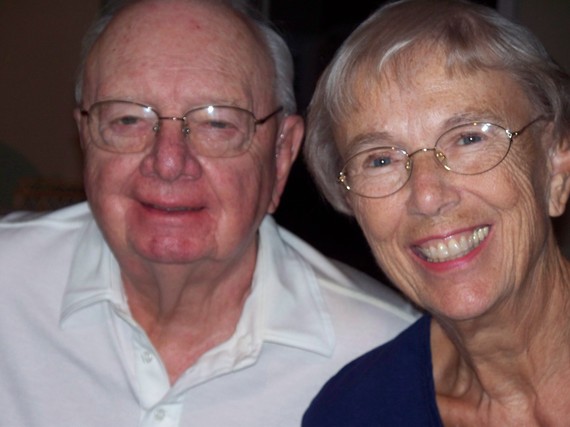 My dad and mom, Fred and Lee Brockmann