Jorge Valencia is from Silicon Valley. But his daily life couldn't be further from those "basically swimming in gold" not even five miles away.

"There's like, an invisible boundary around … eastside San Jose," the 16-year-old told John D. Sutter, who documented poverty in Valencia's community for CNN. "They don't even see you as humans. They think you're trash, or peasants, or less."

Valencia -- who said his family often lives on just $2 a day -- is part of the impoverished population that exists within one of the most prosperous places in the U.S., according to CNN.

Despite many people prospering, about one in three kids in the San Jose area struggles with hunger, according to Second Harvest Food Bank. The organization is one of several fighting for the valley's most vulnerable.

Between July 2013 and June 2014, Second Harvest distributed more than 1 million pounds of food each week to people in need throughout its service area, which encompasses San Jose. Volunteers help support its mission, contributing more than 316,000 hours of service connecting the hungry with food assistance throughout the last fiscal year.

"Many people think that here in Silicon Valley, which is such an affluent area, hunger really isn't a problem," Kathy Jackson, CEO of the food bank, said in a video produced by Second Harvest. "It shouldn't be a problem, but it is a problem."

Jackson said the organization serves a wide variety of clients who need help: Employed parents who can't make ends meet making minimum wage, single mothers trying to provide for their children and unemployed professionals who lost their job due to the Great Recession.

Poncho Guevara, executive director at Sacred Heart Community Service in San Jose -- another local nonprofit providing relief -- said seemingly high pay doesn't go very far in an area with skyrocketing costs of living expenses. He told NPR it's common to see working class clients, like security guards at Google, have to rely on the organization's assistance to feed their families.

The need for organizations like Sacred Heart and Second Harvest likely won't dissolve anytime soon. A report released last month by Joint Venture Silicon Valley found that the pay gap between low-wage and high-wage positions had grown at a higher rate in Silicon Valley last year than other regions of the state, as Wired reported. What's more, the wage gap between white workers and their black and Latino counterparts was significantly wider than the rest of the country.

"This is the moral shame of our community," San Jose Mayor Sam Liccardo told CNN of extreme poverty among kids. "It is incredibly challenging to be a child growing up in poverty in this valley. There simply aren't the support systems in place to ensure those kids can thrive."

Last December, Sacred Heart garnered and gave away 17,400 toys and books to children in need for the holidays, ABC 7 News reported. But just days before Christmas, the organization was still thousands of items short of their goal.

A last-minute call-out for help garnered an additional 1,200 toys from the community.

"It's actually inspiring to us because we feel like we're not alone in the struggle to build a community free from poverty," Guevara told the news source at the time.

CORRECTION: An earlier version of this article misstated the amount of food distributed by Second Harvest Food Bank.

To take action against hunger, check out the Global Citizen's widget below. 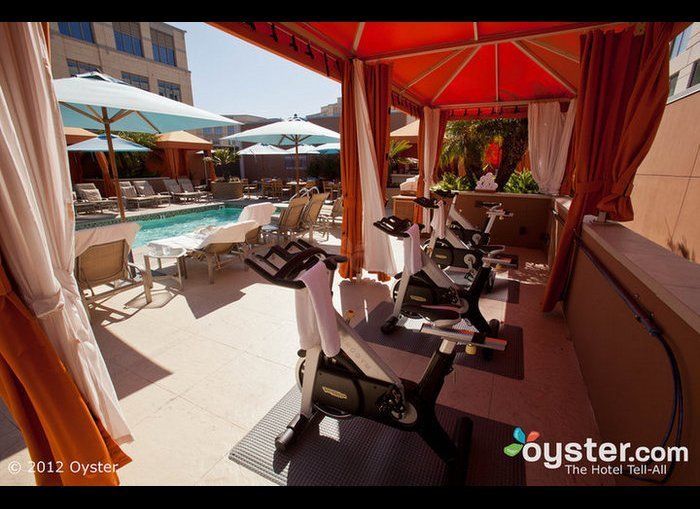 1 / 6
Four Seasons Silicon Valley at East Palo Alto
This Four Seasons reflects the legendary service and commitment to quality of the luxury brand. Upscale touches are everywhere, from the beautifully manicured grounds to the sleek wood-paneled lobby to the spacious rooftop pool (where attendants offer guests free sunscreen). The spa, pool, and Quattro restaurant are all top-notch, and the rooms are bright and modern with floor-to-ceiling windows, marble bathrooms with deep soaking tubs, and large flat-screen TVs. <strong>Work:</strong> The hotel offers over 7,000 square feet of indoor meeting space, complete with ballrooms, flexible board rooms, and catering service. <strong>Unwind:</strong> The stylish rooftop pool features private cabanas and bar service, as well as an outdoor workout area. <a href="http://www.oyster.com/silicon-valley/hotels/four-seasons-silicon-valley-at-east-palo-alto/" target="_hplink"><strong>See more great pics of the Four Seasons »</strong></a>