Another day, another social media site rocked by misogyny.

Today's spotlight is on Twitter. Since Wednesday, a UK feminist has been virtually pummeled for leading a campaign to keep women memorialized on bank notes.

By mid-day Saturday, two Twitter employees had responded. The timing seemed late, and the action, sub-optimal. Would the outrage grow, jump across the Atlantic? (Think Texas Sen. Wendy Davis or MotrinMoms of yesteryear.) Or would this be yet another flash-then-gone tempest?

It's not like this is the first time a social site has been in the news this year for misogyny. Or the first time we've talked about it. Here's Jessica Coen from last year:

I never stopped seeing stories of women who were harassed online. Didn't even matter what they were writing about; women are just punished for existing on the internet... there's so much misogyny online that I can barely raise an eyebrow.

Facebook was widely criticized in April for "branded social ads showing up on pages and posts that are misogynistic and violent" (trigger warning).

And women journalists have to deal with "new forms of harassment, sexist comments, or worse, from social networkers."

Amazon came under fire (pun intended) earlier this year for selling a target practice mannequin of a woman that "bled" when shot. The vendor displayed the mannequin at an NRA convention as "The Ex." 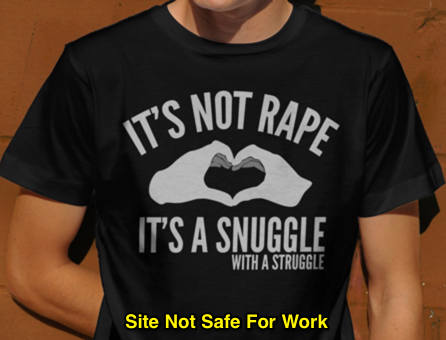 University men see nothing wrong with penning a newspaper column that recommends teaching girlfriends a lesson, explaining: "It's not rape if you shout 'surprise'."

"Slut shaming" has entered our vocabulary, along with new "definitions" of rape: struggle snuggle.

If you really want to feel depressed, read the @everydaysexism project.

The key is this: Where can brakes most easily and effectively be applied?

Mothers Against Drunk Driving might make an excellent role model for effecting social change, if language were as clearcut as a breathalyzer test.

It's not. But one thing the offenses do have in common is this: They are both about behavior.

And then act PDQ.

In other words, Silicon Valley, treat your female customers as though you respect us.

There's certainly a history in the Valley that dampens any optimism that this time we've hit a tipping point. Kathy Sierra. #1reasonWhy. Death by 1000 paper cuts. Xeni Jardin on men inventing the internet. Donglegate. Anita Sarkeesian.

Brian Scates wrote in Medium, "The first step toward fixing a problem is recognizing that there is one."

Twitter, do you finally recognize that there is a problem?

Late Saturday night, it sounded like their answer was yes.

In a statement emailed to the BBC and GigaOm, Twitter promised to extend this functionality to the web and other platforms, but without a timeline.

Reporting. That's half the equation.

The responding PDQ part? That's going to be much harder, as Alex Howard details.

How to create the first digital social space where there are quick, clear, inevitable consequences for advocating sexual violence?

Let's not let this turn into just another day in Silicon Valley.