Ever since the Fuck Yeah! Ryan Gosling Tumblr blog launched in late 2008, we've been swooning over Ryan Gosling photos overlaid with earnest come-ons like, "Hey girl, I can't wait to meet your parents and all of your friends."

The meme has evolved, spawning Museum Hey Girl ("Hey girl, better make room in your permanent collection because you've just acquired the rights to my heart."), Feminist Ryan Gosling ("Hey girl. It's hard for me to reify Beauvoir's theory of the lost female genius when I'm around you."), Typographer Ryan Gosling ("Hey girl, I agree that Didot and Bodoni look alike, but there are some subtle yet important differences. It's like me and Ryan Reynolds.") and others.

Now you can add to that list Silicon Valley Ryan Gosling, created by writer and artist Lian Amaris. Like the other blogs, SVRG overlays photos of the actor with flirty captions. Unlike the other blogs, these come-ons feature a tech twist. For example, one Silicon Valley-style snapshot shows Gosling standing shirtless at a sink, with a caption that reads, "Hey girl. If you queried #mylove the only result would be you."

Amaris told The Next Web, that her inspiration for SVRJ came from a combination of other Gosling blogs and her own experiences as a recent Silicon Valley transplant. She also explained why Gosling seems to lend himself so readily to memes. "I think it's more than Ryan being just a pretty face -- he is somehow able to reflect back anything we want, or more precisely, we can project anything we want onto him," Amaris said, according to TNW.

Gosling himself has commented on the meme. During an interview with MTV, Gosling read off a few selections and even laughed aloud, though at one point he remarked, "Some of these are funnier than others."

Check out our favorite Ryan Goslings for the tech set in our slideshow below. If you like these, click on over to our slideshow of highlights from the Tumblr classic "When Parents Text," showcasing the most endearingly awkward texting mishaps by moms and dads. You can also take a gander at the best memes from the past decade (here). 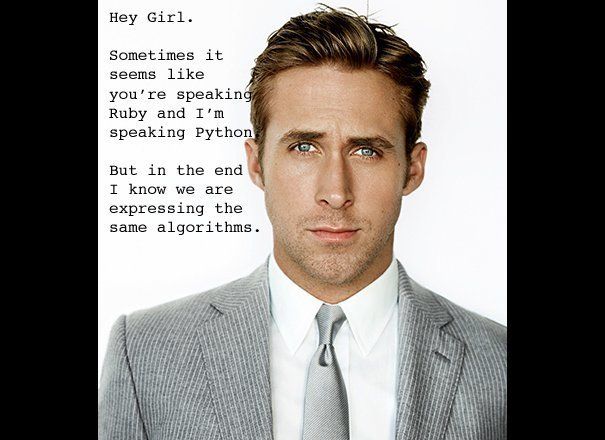