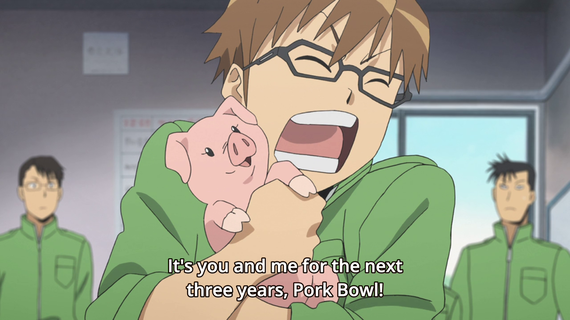 How would you feel about eating an animal that you helped feed and thrive? An animal which, maybe, you named and grew attached to? What if you were asked to learn how to skin and quarter the game you will later enjoy? These are some of the ethical conundrums facing Hachiken, the protagonist of Silver Spoon, a manga developed into an anime series, now available for streaming on Netflix.

The young Hachiken, caving in to the enormous pressure put on him by his family to succeed in his university entry exams, decides to move from the city to a farm school to study dairy production. The institute is located in rural Hokkaido, the northernmost of the four main islands forming Japan. Most of his peers, who have grown up in the countryside, attend the various concentrations in the school to take on their own family business, even when their passion lies elsewhere, from baseball to horse riding. Immediately, Hachiken stands out as an outsider, as he does not have any emotional investment in his studies not he knows what his future has in store for him. Nevertheless, these unusual characteristics soon make him very popular among the students: he thinks differently, questioning habits and ways of thinking that his peers take for granted. He can take the initiative, and has a good sense of logistics, budgets and administration.

Although he is very good in the more academic topics, the farm and nature in general in the new rural setting are quite daunting to him. He is suddenly faced with the hidden realities of the food system that had nurtured him since birth, but that he had never given a second thought to. At first, seeing eggs coming out of the rear of a hen, he is so disgusted that he almost gives up on them, but the enthusiasm shown by his schoolmates for the fresh product eventually pushes him to try them. The discovery of the sensual enjoyment of food makes Hachicken change his mind about many food production and preparation issues.

However, the toughest challenge he faces is to balance his affection for the farm animals, which he helps raise and take care of, and the fact that they are intended to be butchered and eaten. Having seen on his first day of school his schoolmates cut a chicken head off, a few days later he struggles to overcome his disgust when he is offered a piece of that same chicken, cured and smoked. The most heart-wrenching experience Hachiken endures is managing his affection for a tiny piglet, which he calls Pork Bowl despite his friends' warning about naming farm animals. He decides to take responsibility for the pig, helping him grow and achieve a decent size category for the market. In the end, he knows he cannot stop the animal from being butchered, but he decides to buy all its meat, making smoked bacon out of it and sharing it with his schoolmates, as a form to make sense and give value to the pig's death.

Hachiken's emotional challenges are given great relevance in the narration, making the anime an intriguing source of food for thought. The ethic and environmental debates about meat eating are far from new, especially in a country like Japan where the Buddhist influence has had a huge impact on the local foodways for centuries. However, as growing numbers of vegetarians and vegans start having an impact on the food industry in many countries, the complicated relationship between humans and the animals they consume has gained new visibility. A recent article on The New York Times, for instance, discussed the eat-what-you-kill movement.

The anime Silver Spoon has probably prompted many young urbanites to reflect on their eating habits, as city dwellers are often completely removed from the sources of their food and what food production entails. When I first moved to the US, I immediately noticed how you rarely see whole carcasses of animals hanging in butcher's stores, as most meat comes neatly packaged, removing the customer from animals. Even whole fish is not easy to come by in supermarkets, as it is mostly already deboned and fileted. I am looking forward to discussing the anime with students the next time I teach a food and media course...