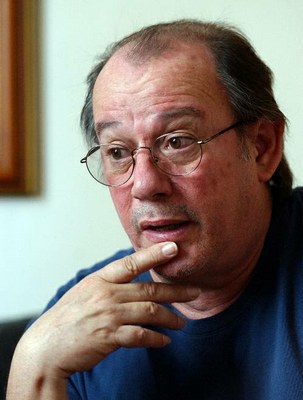 While young people around the world enjoyed the music of the sixties, for Cubans it was forbidden to hear anything that had imperialist echoes, including the Beatles. Just at that time there appeared in our island what ended up being called the Nueva Trova -- New Minstrel -- Movement. Silvio Rodriguez has been its signature performer with songs full of poetic lyrics and music that mixes the tonalities of our traditional minstrel songs with the chords of Bob Dylan.

Silvio's generation, touched by the euphoric effects of the Revolution, was considered anti-establishment, based on between-the-line meanings one could read into his lyrics. He was banned on some television programs and many of his songs were never broadcast. Little by little, before the eyes of followers and detractors, the Movement was absorbed by the ruling ideological apparatus to the point where there came a time when no political event lacked the accompaniment of his songs. He won admirers and spawned imitators, girls swooned over him, and requests for concerts came from all over Latin America.

Silvio Rodriguez, who always worked and reworked his lyrics, "dwelling in time as befits a man awake" - as he says in one of his songs - founded a record company, became a member of parliament, and started making statements of support for the government while repudiating its critics. His detractors say he also became a millionaire, but that doesn't sound like such a bad thing to be, compared to his fellow citizens who are forbidden by law to prosper economically.

He recently engaged in an epistolary debate with the intellectual Carlos Albert Montaner, who lives in Spain and has been the target of virulent accusations by the Cuban government. Silvio had a rough time in the debate - which occurred on the Internet - and even the Cuban Communist Party's official daily paper, Granma, rebuked him for daring to talk with "the enemy." The brief responses of the troubador lacked the agility he brings to his song lyrics, and his absence of arguments to rebut his "adversary" left some of his followers, still harboring their illusions of yesteryear, gnashing their teeth.

The singer has now begun a tour with a first stop in Puerto Rico, where striking university students have already received support from the former young rebel. His tour will also include New York and other North American cities, where he serves as his country's cultural ambassador, repeating that Cuba holds no political prisoners. Curiously, the author of "Hopefully" can stroll across the stages of our neighbor to the North, despite his profoundly anti-imperialistic message. Meanwhile, emblematic figures of our music - such as Willy Chorino, Gloria Estefan, Paquito D'Rivera and the late Celia Cruz - for political reasons have been denied permission to visit their own country.

The 1980s, when at any hour of the day or night, you could turn the radio dial and hear Silvio's songs, are long gone. In those days he won every popularity contest and seemed like a star whose light would never fade. But the demands of tourism and Cubans' own weariness with protest songs, set the stage for the creation and spread of danceable music which, in all its rawness, is the anthem of these times: reggaeton. While Nueva Trova still has its adherents, it has been relegated to niche audiences.

Today, Silvio Rodriguez is the living representative of nostalgia for a utopia that never materialized. Some of his fans come to his concerts decked out in their Che Guevara T-shirts and sing the choruses as if they could roll back history; it's as if they are saying, "This is not dead." Increasingly rare are those who can reconcile his musical expression with his civic behavior, as few can forgive the many years he has been sitting in parliament without raising his hand to ask for an end to the immigration restrictions, the elimination of the dual currency system, or the decriminalization of political dissent.

Fortunately, for what will one day be his memory, he composed beautiful songs of love and betrayal, and many others with a universal ambiguity that make you think about the times we have lived in. I have all his disks at home, but I rarely listen to them. Every time I'm tempted to put one on, I'm struck by the fear that this time I will see all the cracks, and the old illusions will lose their magic. I don't want to imagine myself exorcising the ghost of a poet. So I prefer to let it rest, until the urge passes, or until the day when Cuba becomes a garden that can shelter, in peace, all the unicorns, whatever their color.

Carlos Alberto Montaner Silvio Rodriguez Cuba
This Blogger's Books and Other Items from...