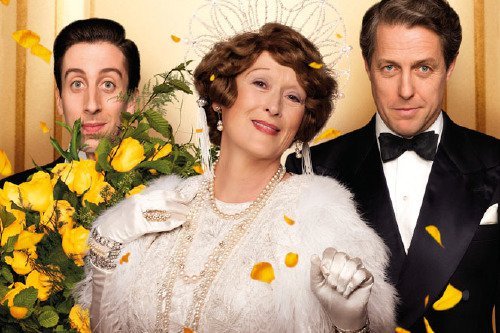 Some of the best "Big Bang Theory" episodes feature the real-life piano-playing skills of Simon Helberg (Howard Wolowitz). So when director Stephen Frears needed an actor to play Cosmé McMoon, the long-suffering accompanist to the vastly wealthy and equally vastly untalented Florence Foster Jenkins, Helberg was the perfect choice. Meryl Streep plays Jenkins and Hugh Grant plays her devoted husband in the marvelously funny, touching, and romantic "Florence Foster Jenkins," based on the true story of a woman whose dedication to performing was not inhibited by her complete lack of ability to get the notes right. In an interview, Helberg talked about how being daunted by Streep helped his performance and how accompanists cherish the singers they support.

When did you start playing the piano?

I was 10 years old which was late, a late bloomer. It seems so little now but all the ten years olds are like - 'Dude you're washed up man, I've been playing for five years.' I had to catch up.

Are music and acting related? The judgments about rhythm and tone?

I would think so. It would be interesting to do a survey. I certainly think obviously rhythm is a huge part of being an actor. It just is unconscious to a degree but particularly in comedy rhythm is pretty essential and there's probably something more physiological going on. I have a good ear for music and voices and dialects and I'm sure that in some way it plays into everything that I do but I'm sure there's a couple of tone-deaf, rhythm-free great actors out there.

I know Meryl Streep sings, as she did in "Postcards from the Edge" and "Mamma Mia."

Meryl is pretty phenomenal at everything, even singing, and she plays music and she has learned to play violin, guitar for roles. Things that you are not supposed to just quickly learn how to do she has done for movies. It's sort of strange and somewhat upsetting sometimes with her, there's nothing that seems to stop her.

I'm sure it was daunting to meet her and yet that must have worked well for the relationship that your character had with her character who was a little daunted also.

Yes, it was it kind of a blessing for me that he was supposed to be gobsmacked and somewhat paralyzed with fear and then in other moments in total awe or sweating or vomiting or things that I probably did all before I met her. But then there wasn't a moment from the actual instance of saying hello for the first time and meeting her that she ever was in any way really intimidating. I think that it's what people try to bring to that situation which is her whole amazing kind of unprecedented talent and career but as a person and part of what makes it so great is you are just standing there in the room with her and then when you are acting that's it, she's there and you are there. I occasionally get kind of lost just looking at her and watching her even when we are working but mainly it feels very much like you are two people doing a scene, working, listening to each other. It's remarkable but I think it's also essential to why she is able to do what she does.

I understand that you didn't pre-record the musical numbers you performed them while they were being film, is that right?

Yes, that was kind of a surprise to everyone actually. I went from thinking, "Thank God I play the piano because I'll know where to put my hands when they get a real classical pianist to record this," to "maybe I'll play the Chopin, okay I can play a couple of these things." I play very well, I just don't play classical or opera and certainly not at the level that Cosmé McMoon was able to play.

So I went from kind of that to, "Okay, I guess I'll try to play these things," because Stephen Frears is very set on that. I initially basically told him, "Sure, I can do anything you throw in front of me," because he kind of pushed me into lying a little bit and I kind of convinced myself that maybe I could do this but there are many points that I thought this was not going to happen. And then I got this note about recording at Abbey Road which was another kind of astonishing monumental moment in my life and sort of this collision on of my dreams basically of being in a movie with Meryl Streep and recording at Abbey Road and it was happening at the same time in a sense. So we went to do that and we recorded there for I think five days and recorded all of the music and got it right and then I think that proved to everyone that we could do it live. So we did all that and they didn't really use it.

And I think doing it live was honestly what I think that really made those scenes come alive in a way that I don't think they ever would have otherwise. Meryl's idea was to sing live possibly, at least that something she had toyed with and have done before but if she was going to do it live they needed the piano to be live because it would be different every time. And then we just kind of painted ourselves into a corner and so we just said we had to do it live. I think for both of us it was a big challenge and it was technically complicated but it also was kind of amazing really because what you're watching is what we were doing and I think that is why those scenes feel real and authentic.

In those scenes, what do you do as an actor and what does your character Cosmé do as a musician do to try to salvage Florence's performance or help her along?

In reality and in the film it ended up kind of being the same thing which was a beautiful symbol of their relationship. Being an accompanist is very selfless in many ways because you're really just trying to elevate the singer and help them shine ultimately. If Florence skipped a bar he would compensate and skip ahead and if she seem to forget the note to come in on he would give it to her and he even would change keys sometimes to try to help her. I think she was in all the keys. But then when it came time for him to take his four measures, his little solo, he would just play it flawlessly and at an incredibly fast tempo, probably because he was afraid she was going to come in by accident and ruin it and then he would stop and then of course she wouldn't come in and then he would gently give her the note and he'd dive right back into the shark-infested waters with her. So they had this very tandem, symbiotic relationship and it was lovely and it kind of explains in many ways why he went along with her. It was a selfless love of music and I think accompanists cherish their singers and like to help beautify them.